Then & Now: Seán’s music is alive and well 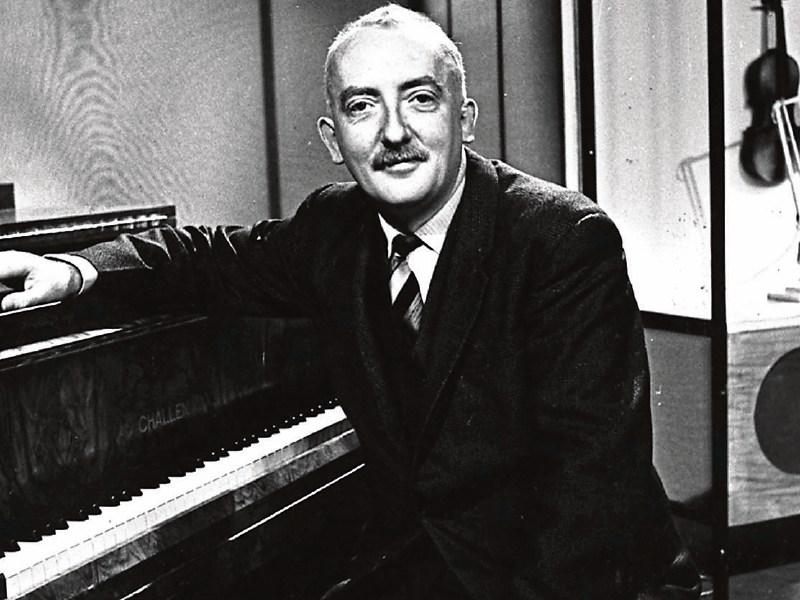 The Church was packed on October 6, 1971 for his Funeral Mass celebrated by his great friend Donncha O’Conchuir, C.C. of Ballingearry and Cúil Aodha.

Piper Willie Clancy and accordionist Tony Mc Mahon played a lament before Aifreann Shéain Ui Ríada. The music for it was composed by Séan himself and eldest son Peadar played, and brothers Eoghan and Alastair sang with the Choir, that Séan founded shortly after his arrival to Cúil Aodha.

After the conclusion of Mass Séan’s group Ceoltoiri Chulainn played a lament that brought tears to many. His coffin was shouldered the three miles to Relig Ghobnatan in Ballyvourney.

Then & Now: Thanks for the music Séan

There is no single category in which Séan O’Riada’s contribution to Irish Culture in general and to music in particular can be placed. He had undoubted prejudices, but also great vision, and alone he was a catalyst. His death was a great loss to Irish Music, but his work has stood the test of time.

The name of Séan O’Ríada will never be forgotten as long as people continue to play his music.

Over the last number of weeks Seán's short life (born August 1, 1931) has been recalled on TV, Radio and print.

On the John Bowman Show on RTÉ Radio 1 for the past few Sunday mornings family members have been recalling his involvement in all areas of his music.

A special hour long edition of Nationwide on RTÉ featured family and friends of Sean's on Friday October 1.

A highlight special from two concerts presented by the National Concert Hall, the Arts Council and RTE in Portraits of Seán O'Riada on Saturday night last.

On Comóradh an Riadaigh 1991 from the archive series on RTE Raidió na Gaeltachta featured Seán and a special commemorative mass broadcast live from Séipéal Ghobnatan in Cúil Aodha, Co Cork on Sunday morning. It had music from the wonderful Cóir Chúil Aodha choir, under the direction of Sean's son Peadar Ó'Riada.

The 50th anniversary of his death and contribution to Irish music was marked on last Sunday October 3.

BALLYHOURA WALKING Festival in Kilfinane celebrates 25 years this weekend. It was Ireland's first ever walking festival when it was established a quarter of a century ago and it has grown considerably since.

It is in partnership with the Joyce Brothers Music Festival. Both compliments and enriches each other with a packed weekend of events to cater for followers of both.

The walking programme caters for the serious and more relaxed walker around the hills, trails and mountain side of Ballyhoura with its stunning scenery.

The Joyce brothers were renowned for collecting and documenting Irish music, songs and poetry from the 1800's.

We now turn to the Joyce brother’s life and times and their great contribution to Irelands music and singing history. Their father Garrett Joyce was married to Elizabeth O'Dwyer who was born in Keale in the nearby parish of Glenroe.

They had eight sons and two became famous, Patrick who was born in 1827 and Robert who was born in 1830. In later life Robert added his mother's name to his own and became Robert Dwyer Joyce. About the same time Patrick added the name of his maternal grandmother to his name and became known as Patrick Weston Joyce.

Patrick Weston Joyce in 1856 married Caroline, daughter of Lieutenant John Waters of Baltinglass, by whom he had three sons, and two daughters. His eldest son Weston St John Joyce was the author of a popular book called Dublin and its Neighbourhood.

Patrick died at his home, Barnalee, Rathmines, on January 7, 1914, at the age of eighty seven. He had been ill for five weeks, but almost to the very end he had continued to work on a further collection of Irish music which he had hoped to see published.

Few men could have loved the old songs, the old music, and the old traditions of Ireland better than he. He was buried in Glasnevin, two days later, and a number of tributes were published afterwards.

A writer in the Journal of the Royal Society of antiquaries, paying his tribute, spoke of him as having been born in sight of the Ballyhoura Mountains and the Galtees, and, as so often, the impression of the surroundings of his boyhood left its mark on all his afterlife.

In one of his books, English as we speak in Ireland, he gives us clues to these influences, recollections of the passionate piety of the peasantry in the little thatched, earth floored chapel, of the rough but scholarly hedge schoolmasters, of the dancers for whom (like another Goldsmith) he played on the fife, and of the traditions of the glens, and fields.

In the course of his lifetime Joyce amassed a great amount of knowledge about his native country, knowledge very much of which might otherwise have been lost.

And tireless as he was in amassing this knowledge, he was equally tireless in imparting it to others. In all he wrote some thirty books, twenty four of them about Ireland. It must always remain a cause for regret that Joyce left us no autobiography.

He followed in the footsteps of Bunting, Petrie, O’Donovan and O’Curry, reaching, however, a larger public than any of these four had reached, for the fields he laboured in were more numerous, and as well as that, he wrote principally not for scholars, but for the ordinary people of Ireland, People such as he had known in that lovely and never forgotten countryside round Glenosheen.