Then & Now: Everyone knew someone who died in tragic cinema fire... 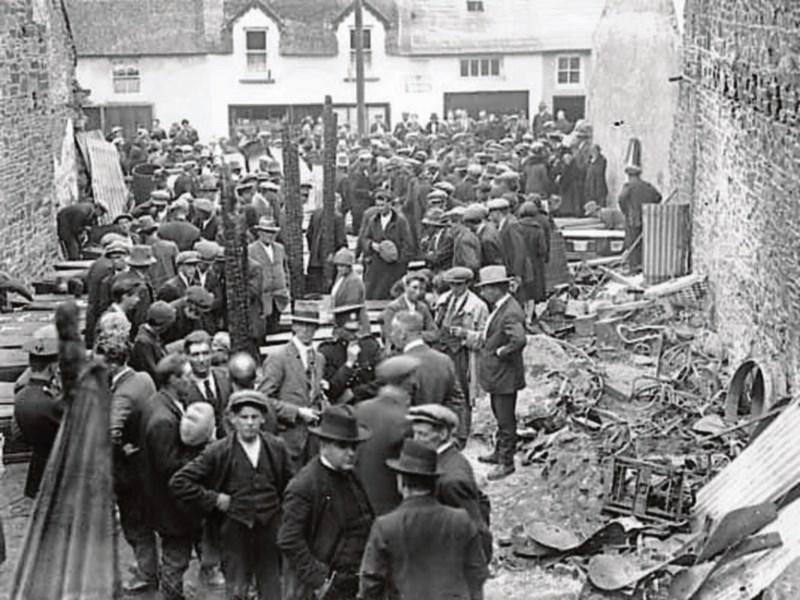 DROMCOLLOGHER is still remembered as the village where 48 people lost their lives, in a cinema fire on Sunday, September 5, 1926.

The burning touched every family in the community of fewer than 1,000 people.

It was the worst disaster to hit Limerick, and the death toll remains the highest, for any recorded accidental fire, in Ireland.

One entire household was wiped out, and many families suffered multiple losses. Half of the dead were under 25 years of age, and 15 were children with the youngest victims just under 7 years of age.

The story of events on that fateful night, are briefly as follows. Patrick Brennan owned a hardware store, at the western end of town. It contained a storage area downstairs for timber, and five-gallon drums of petrol. Overhead was a spacious loft with a timber floor. The room had been used for showing films, on previous occasions. Access to the loft was by an outside, set of timber steps.

The loft measured 60 feet long by 20 feet wide. At the far gable end two small windows barred on the outside, flanked a small narrow room, which was portioned off from the rest of the room. This was used as a dressing room for amateur dramatics.

William Forde, a hackney car owner in Dromcollogher, decided to rent this upstairs room from Patrick Brennan, for a film show. He hired Patrick Downing a projectionist, to bring films, and a mobile projector from Cork. The performance was timed to start at 9.15pm after Benediction, was over in the nearby church. The estimates of the attendance varied, but at least 150 men, women, and children passed through the narrow door into the loft.

William Forde was just inside the door collecting the money. He had two candles on the table beside him, which were lit when the first film started. This was to help him with the money and to give change back. The people sat on timber forms, and wooden chairs.

Patrick Downing was further up the room, standing at the centre of the table, operating the projector. Around him lay rolls of exposed film reel. It is believed that the films to be shown were Baby be Good, and The White Outlaw. The supporting comedy film concluded after 25 minutes, and the film reels were left loose nearby.

How the fire started around 10pm as the second film was being shown is not clear. It could have been horse – play as some youngsters were throwing their caps at the candles in the hope of quenching them, so that they could make off with the takings. This story was never confirmed and in all probability the fire was an accident.

One of the reels which lay unprotected on the table near the door, went on fire when a candle on the table overturned and set it alight. The reels of film were of a highly inflammable nitrous material, and it flared immediately and burned furiously.

The people rushed to the single narrow door from which the ladder and stairs descended. The people nearest the exit escaped as the fire spread rapidly. More people fled to the rear of the hall where the two windows, were located inside the dressing room area. John Gleeson, the local parish clerk, by his quick action, saved six people by removing the bars on the windows.

The local IRA members used this room for meetings, during the troubled years. They had cut through the bars to enable them to escape in case of a surprise Black and Tan attack. More people would have got out the window, but unfortunately it got blocked when a women became trapped in it.

Within ten minutes of the start of the fire the floor collapsed, and the stairs and roof fell in. The victims died from a combination of burns, asphyxiation and shock. Forty-six people were dead within fifteen minutes, and two others died later from their injuries.

The majority of the victims were from Dromcollogher, mainly the village, and ten people alone came from Pike Street. Only twenty-one of the dead were positively identified. Such was the scale of the tragedy that the army had to deliver the coffins to the town for the burials in the mass grave inside the church gate.

Special permission was obtained from Rev Dr David Keane, Bishop of Limerick, to allow a communal burial of all the victims in the church grounds.

The funeral Mass on Tuesday September 7, was attended by William T Cosgrave, President of the Executive Council, as the head of the Government. The parish priest of Dromcollogher, John Canon Begley, presided and Rev Daniel O’Callaghan, son of Mary Ann O’Callaghan, RIP celebrated the Requiem Mass along with forty-five other priests.

At the conclusion of Mass, the Bishop performed the final obsequies, over the coffins, which were lined up in the churchyard awaiting burial. He gave a short address to the assembly of mourners, assuring them of the support of all people in the country. Hundreds of people remained until the forty-five coffins were finally put in their final resting place, and the grave closed.

The bodies of Violet Irwin, (15) and Thomas Noonan, (7) were interred in their family plots, in Cloncrew, and Deliga, cemeteries. The forty-eight victim, James Kirwan, (60) whose daughter Margaret was among the casualties, died in Croom Hospital, and he was also buried in the churchyard grave.

A national relief fund was set up immediately and generously subscribed to from so many parts of Ireland and abroad. Arthur Guinness Company donated 500 pounds, Jameson Distillers, 250 pounds, Tim Healy, Governor General of the Irish Free State, contributed 200 pounds.

A committee in Limerick city raised 645 pounds. Will Rogers American entertainer gave a personal donation of 100 pounds. Duffy’s Circus contributed also, and the proceeds of a special concert in the La Scala Theatre in Dublin, was added to make up the total of 16,787 pounds.

General Richard Mulcahy, Chairman, and a number of trustees administered the fund. Payments were made in different amounts, such as lump sums and most were sent in instalments every quarter to the dependents of the victims, and to some of the injured survivors until the 1950s. The ‘’burning money’’ as it was known, was a much needed and welcome supplement to their incomes. I will conclude the story next week.