Could it be spring: As March starts have we finally turned a corner on old man winter 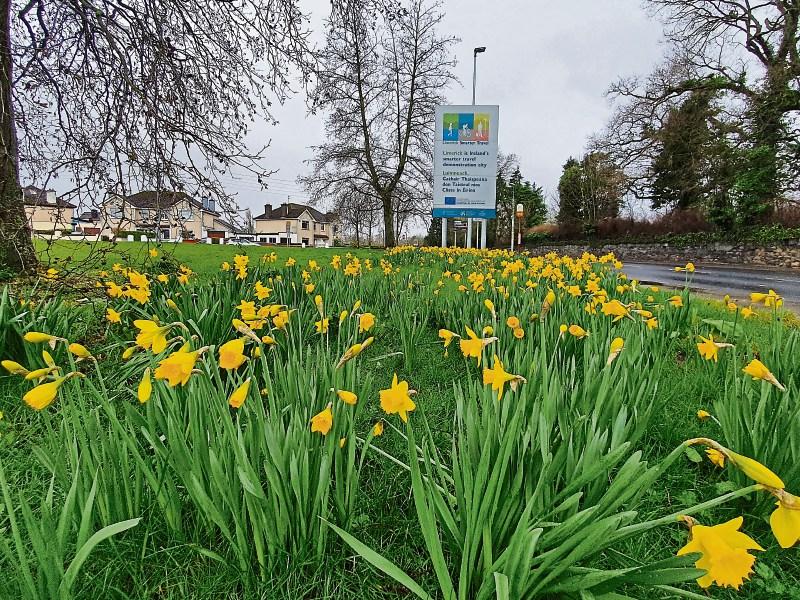 'A host of golden daffodils':  Reader Grace O'Brien, Westbury sent this picture from the  Corbally Road. She said that she hope it cheered  us up during stormy weather

I WELCOME March which was once the first month of the year, and it is named after the Roman God, Mars, who was the God of Agriculture, as well as being the God of War.

One of our neighbours in the solar system is named in his honour. It is the most hospitable of all the celestial bodies within striking distance of Earth and, according to reports serious attempts to establish a colony there will be made in the future. Huge numbers have volunteered for this one-way trip. Those organising the project are trying to whittle down the numbers, so to select the most suitable candidates for the experiment.

Our ancestors weren't overly concerned with astronomy and their efforts were focused on more grounded matters like making "ends meet" and making a living from the soil. It was an uphill struggle for those who had infertile ground. Beware the Ides of March the soothsayer warned Julius Caesar. A soothsayer was a teller of truths, and someone who could read the future, and warn you about it. Someone like Mystic Meg or others we are familiar with. The ides of March were a lot more complicated and based on the full moon and the calendar and is fixed for March 15.

Dry cold weather usually comes to mind when the month of March is mentioned. We are after leaving behind one of the wettest and windiest February I have experienced, with three storms arriving over the four weekends of the month. William Wordsworth describes it in the following words:

On the top of a bare hill

The ploughboy is whooping anon-anon.

In the old days the spring clean was very much part of the ritual of the season. Inevitably this meant cleaning and brushing and sweeping every part of the house, little nooks and crannies, that might have been overlooked at times. I remember an old neighbours house that this spring clean was done, when I was very young. Two red vase glasses had pride of place on the shelf above the hearth, and they were taken down, soaked and washed in a pan of warm water. They were precious as they had been in the house for decades, flanking the equally precious statue of the Virgin Mary. They had cost a pretty penny when bought overseas by a relative.

When the vases were rinsed with clean water their rich red colouring shone through and sparkled when the sunlight came slanting through the southern faced kitchen window. The vases were fairly regularly dusted and cleaned as their place above the fire made this a necessity from the Smokey turf fires and sweet-smelling timber logs. The vases were never regarded as purely decorative and were filled with flowers which seemed to compliment their rich red colouring. The March spring clean and the first season flowers made them sparkle triumphantly. They were little treasures that had special meaning to my neighbours, like many people and houses from that age.

Gathering seaweed happened in times past at this time of year, and as many of you will know it's a powerful natural fertiliser that can be used to speed up the growth of crops. Others warned that it could produce excess moisture in potatoes, if it were applied too liberally. The farmers that lived close to the sea had foreshore rights, and each of them owned a plot in the strand that entitled them to cut and harvest seaweed. This was usually done with a scythe. A rope was placed in such a manner as to encompass what had been cut and this could be hauled ashore manually.

Some of the lazy ones relied on the tide to bring it ashore for them, but their optimism was often misplaced. Strong winds and cross currents could change the direction of the crop and take it out instead of it coming ashore. Could this be a postscript to the adage: neither Time nor Tide wait for no man?

There are numerous medical products such as iodine, that are extracted from seaweed, and in Okinawa Japan, food obtained from seaweed is thought to add considerably to the lifespan of locals, many of whom live to be over a hundred years old. Dilisk, or sea grass was an edible plant that many people liked. They also consumed periwinkles, barnacles, and other shellfish. I remember the periwinkles coming into the house from Ballybunion, when I was young, but I never shared their enthusiasm for this kind of food.

Dances weren't acceptable in olden times during Lent, and during the show band era many of the bands got work in Britain. Oddly enough, there were no restrictions as regards drama. In fact, it was the time of year for a surge of activity on stage.

Many local groups and travelling players came to rural villages, and their performances were well attended, and much enjoyed. Nearly all the parishes had talented actors and actresses, and great excitement was evident as they prepared for their annual appearances on stage. The normal procedure was to include a concert as well as a play. Dances which were called "Hops" very often took place after these performances. It seemed that there were no objections from the clergy for these hops.

Lent is a time for giving things up, and fasting is also related to this idea of self-sacrifice. It sounds as if it could be very negative, but just read these lines by an American bishop Arthur Lichtenberger:

Fast from criticism, and feast on praise;

Fast from self pity, and feast on joy;

Fast from ill temper, and feast on peace;

Fast from resentment, and feast on contentment;

Fast from jealousy, and feast on love;

Fast from pride, and feast on humility;

Fast from selfishness, and feast on service;

Fast from fear, and feast on faith.

Highly practical thoughts, not only for Lent, but for any time of the year.

A chorus of loud croaking can be heard around the countryside at present as this is the breeding season for our frogs that have emerged from hibernation. From late February they are gathering in large numbers in ponds, drains, and dykes as they seek out to attract partners. They can travel up to a kilometre to find a site and both male and female frogs return to the same pond year after year.

Their remains can be seen on our roads at present as they have to cross them to find sites. Crossing roads are just one of many threats they face as half their habitats have been lost to better drainage and less hedgerows in recent years. The ‘’Hop To it Frog Survey’’ began in 1997 and people can participate by visiting www.ipcc.ie The site contains lots of useful information and was set up to address falling numbers and threats to their future. Nature lovers are glad that it was snakes instead of frogs that Saint Patrick vanished from Ireland.

The ground is saturated after the long rain fall since last August, and we could do with lots of dry weather. We welcome the signs of the approaching spring and hopefully a spell of decent weather. The snowdrops, daffodils and crocuses are now in full bloom, and the evenings are getting brighter, and as March came in like a lion, hopefully it will go out like a lamb.