Then & Now: Mowing machine proves to be a cut above 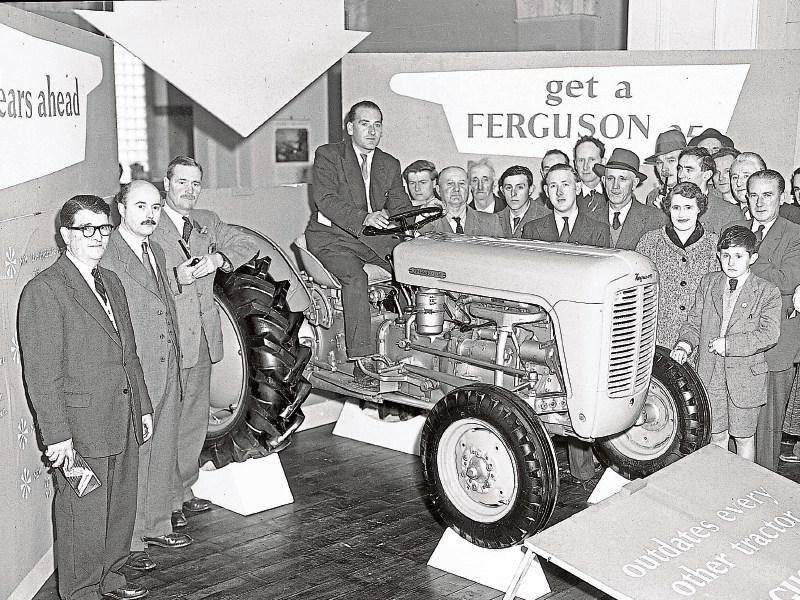 Picture from the opening of EJ & TN McCarthy's premises on Patrick Street , Limerick in October 1956

THIS WEEK I will share with you the story how Phelan's Shop Newcastle West sold the first Wood's mowing machine in West Limerick.

Willie Phelan was a man before his time, a great innovator and loved to see work made easier for everyone in town and country. At the time all the meadows were still being cut with the scythe like they had been for generations before. A good scythe man would cut an acre in the day and the top performers ( known as spalpeens) would travel the countryside in search of a day's hire. When the horse drawn mowing, machine started to come on the market little interest was shown at first. Nearly all the farmers were reluctant to change, and the scythes men were hostile to it as it would be taking their living away.

Willie Phelan sold the first Woods mowing machine in West Limerick after it had been on display across from his shop for a good while. The wily merchant suggested to his good friend Flory McCarthy from Ardagh to take one of the machines away to earn a bit of money for himself. The deal with Flory was to pay seven and six a month back once he was up and running.

Flory had to borrow a horse, a grand chestnut steed from his neighbour Din Connors to enable him to set out in business. With the machine came a set of blades, and a carburundum edging stone, and another fine stone to be used with water to put a finish on the blades. Flory did a few practise rounds in one of his pasture fields before commencing in the big meadow at the back of his house.

The hum of the mowing machine could be heard along with the call of the cuckoo, and corncrakes as the swathes of hay were flattened. A new blade was put in every five or six rounds, and Din Connors put good edge on them and soon only the headlands were left to cut. Several neighbours had gathered to see the machine in operation and were so impressed with the swiftness and neatness of the cutting they booked Flory to cut their meadows. One by one their meadows were cut clean and white and the smell of new mown hay was like honey in the air.

Flory cut upwards of sixty acres of hay that first year, at the fee of half a crown an acre, the only problem was that money was scarce, and he got paid with two wynds of hay for each acre cut. He enjoyed the work and the help from his neighbours who delivered his payment hay and made it into ricks in his haggard. In the back of his mind he was wondering about his financial position and deal with Willie Phelan.

When they met, he was surprised when Willie told him not to worry and to pay him when he had the money in his pocket. "You gave me the start I wanted you broke the ice when no one else would risk it". The following year saw a repeat of the mowing and payment in hay and Flory's haggard was full up but still no money to pay Phelan's.

Flory's luck changed that fall as the weather was very wet and cold and cattle had to be housed earlier, and the long winter lasted well into May and farmers ran out of feeding. He put an advertisement in April in the local paper, saying he had an unlimited amount of the best hay saved. He was immediately invaded by farmers from the surrounding areas, and with the help of his neighbours, the ricks of hay were cut with hay knives and loaded onto vehicles and taken away.

When at last the grass started growing as the sun got warmer, not a rib of hay was left in Flory's haggard, only the outline of where the shiegs had been. With a pep in his step he made his way to town and paid Willie Phelan in full. Both men agreed that old hay was indeed old gold if one had only the patience to wait and sit it out when the skies were grey.

PERCY FRENCH was born on May 1, 1854 at Clooneyquinn House in County Roscommon, and he was one of Ireland's foremost songwriters, and a man of many talents. He was an author, poet, sketch writer, editor, banjo player, concert promoter, landscape painter, and best known as a writer of humorous songs, including Dromcollogher. He wrote this song while on a visit there, to the border town between Cork and Limerick.

I suppose you’ve not been to Dromcollogher ?

And see the fine place we have there

There’s only one street in Dromcollogher

But then ’tis a glory to see

Ye may talk till you’re dumb, but give me old Drom

For Drom is the place for me

He was educated in Windermere College and later in Foyle College Derry, before entering Trinity College Dublin aged 18. He completed a BA degree, and studied Civil Engineering, enjoying his time and hobbies, more than his studies. While there he wrote one of his famous songs Abdullah Bulmul Ameer, which was a satirical account of the Russian-Turkey War, and it became a worldwide hit. He sold it for five pounds, and he was not credited as the writer and others benefitted claiming it as their own.

After college he became an apprentice with George Price who was chief engineer of the Midlands Board. He worked with the Irish Midland Railway, and he taught art at Foyle College. He joined the Board of Works in County Cavan as a surveyor and engineer on a drainage scheme, assessing applications from farmers for grants to improve drains. His salary was £ 300 a year plus travelling expenses which he regarded as untold wealth. He wrote some of his best-known songs during this time getting inspiration from the stories he heard and the characters he met.

Percy wrote Ireland's first musical comedy -The Knight of the Road with a friend William Houston Collisson , and it was staged successfully at Dublin's Queen's Theatre, and Percy was in the leading role. This was the start of a long and highly successful career as a songwriter and entertainer. The West Clare Railway a song ridiculing the state of the rail system in Co Clare, was an immediate success, and the cause of embarrassment to the rail company. It was based on a real-life incident which took place in 1897, when he sued them for damages ( awarded ten pounds) after the train stopped and he was late for a concert.

Percy was married twice to Ethel Kathleen Armitage Moore, who died a year after they were married, and Helen Sheldon, who had been a singer in one of his comic operas. They had three daughters Ettie, Mellie, and Joan. On January 16, 1920 he became unwell while he was performing in Glasgow, and it turned out to be his final performance. He developed pneumonia shortly after and died on January 24, ( one hundred years ago) at his cousin’s house Canon Johnny Richardson in Formby Lancashire. He is buried in the churchyard of Saint Luke's Parish Church Formby.

Says I – Have ye been to Dromcollogher ?

And seen the fine house we have there.

There’s only one house in Dromeollogher

For hardware, bacon, and tea

If your master would come we would treat him in Drom

Oh! Drom is the place for me.