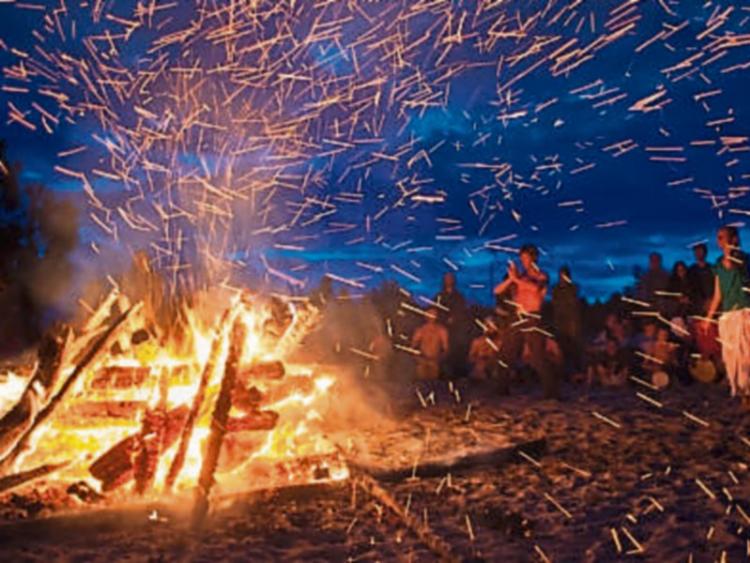 MIDSUMMER IS this weekend and in times past it was a most important festival throughout Ireland with all its beliefs, customs, and folklore.

If the weather had been good and broke around midsummer it was a bad sigh for the rest of the year, and vice versa. We will observe this saying as this summer has been mixed to date with low temperatures and little sunshine. The twenty third of June eve of the feast of Saint John the Baptist was traditionally midsummer’s day. The night was known as Oíche an Tine Chnáimh (night of the bonfire) and Tine Féil Eoin (Fire of Saint John). In most parts of Ireland there was a large community fire lit by the inhabitants of a whole townland or village, and there were small fires lit by the members of each household, or each farm.

There was a widespread custom of each household lighting a fire at which ceremonies for the protection of the house and the farmyard, the family, the livestock and the crops were performed. The family fire was small, no more than a few furze bushes, a little heap of twigs, and a few sods of blazing turf from the kitchen hearth. It was lit in the farmyard or close to the house, and as soon as the brief ritual was completed, the fire could die out. The active members of the household then went off to join the others at the communal bonfire. If there was a recent death in the family the fire was not lit, and no member went to the big fire. This custom of observing a period of mourning for a recently dead relative, did not allow people to join in any public merrymaking.

The fuel for the fire would have been gathered in the previous days – wood, sticks, twigs, bushes, brambles, furze bushes, turf, dry cowpats, and anything that would burn. There was much rivalry as to which group might have the largest fire, and some over-enthusiastic fuel-collectors did not hesitate to raid the fuel heap being gathered for another fire, and disputes or even fights might ensue. Sometimes the competition was so fierce that a rival band might set fire to a fuel pile a day or two before the festival.

There were certain things connected with piseóga that people considered they were well rid of by throwing into the bonfire. These included a spancel , eggs, meat, part of a dead animal or piece of cloth left on a neighbour's property with certain ceremonies to cause loss etc, to that neighbour. It was also customary that small objects of piety, such as rosary beads, little statues or scapulars, when they became broken or worn out, were destroyed without disrespect by being burned in the Mid-summer fire.

In many places old animal bones were added to the pile of fuel or thrown into the fire after it was lit, for the most part as additional fuel but possibly with some ceremonial intent in former times. Usually the term in common use "bonfire" is explained by statements such as "oh they burned bones in the fires long ago."

A favourite place to light the fire was on a height so that it could be seen from a long distance. They were built on commonages on hill tops, on a limekiln, or on top of a large rock outcrop near the sea. In a few places such as Tinakilla in Ballyhahill the fire was built on top of a dolmen, and the capstones of some dolmens have been cracked as a result, of using dolmens to have a high platform for the fire. There was a set place in each district for the fire, at a crossroads, blessed well, street corner or some other public place. The people gathered around these large community fires and celebrated noisily with music dancing singing and merrymaking.

When the fire was well ablaze prayers would be said to obtain God's blessing before the merrymaking commenced. If a priest was present, he would lead the prayers, for the departed and for all present. One traditional prayer went as follows: "In the honour of God and of St John, to the fruitfulness and profit of our planting and our work, in the name of the Father and of the Son and of the Holy Spirit, Amen, " The women present shared in the prayers for a fruitful garden and good summer weather. If the prayers were neglected it could lead to a bad harvest, with a scab on the corn or disease on the potatoes.

Round the fire gathered young and old, and there was much fun and games, music and dancing. The young men competed in casting weights, or in feats of strength speed or agility. When the flames and sparks shot up towards the sky the crowd raised their voices and cheered while others beat homemade drums, tin cans and blew horns and whistles. The people watched in wonder as the sparks soared high over the trees and hedges and the wisps of kindling hovered overhead and the smoke spiralled upwards.

The Ozone Layer was unheard of in those days, so the people had no worries about the damage being done from the bonfire. The musicians played and the young people selected partners and danced around the fire. Other performers sang songs gave recitations and told stories during the break in the dancing.

Later when the fire had subsided a little a few brave souls would leap through the flames and it would be greeted by loud cheering from the assembled crowd. The tradition goes that jumping through the flames brought health and long life and protected the jumpers from accidents, ailments, epidemic disease and the effects of witchcraft or the evil eye. Some wise elders claimed to be able to tell, from the manner of jumping and the flickering of the fire , whether the jumpers were guilty or not of certain misdemeanours , such as theft or misbehaviour with women. At some fires the older men passed around a bottle of whiskey or poitin to share with all who were in attendance to enjoy.

It would be late in the evening when the fire ran out of ammunition and all present would be saddened to watch the glowing embers fade away. Any person who was building a new house took a shovel of seed or a few red-hot sods home from the bonfire for good luck. Others took similar seed to their homes, to bless the stock and crops, and to ensure fertility so their children could succeed to their possessions.

It was widely believed that a house built on a path frequented by the fairies and other supernatural travellers would suffer from midnight noises or supernatural manifestations . Personal illness, or ill luck on the farm might also afflict the family. One remedy for these evils, was to bring on St John's Eve portion of the blessed fire and to build with them on the path in several places small fires which would be left burning until morning.

Some people used to take embers and ashes from the fire then extinct on St John's morning to scatter them on their fields. The ashes, embers or charred sticks from the fire might be placed in the dairy to bring good luck and keep milk and butter safe from evil magic. Some people used a charred stick to mark a cross on the dairy door and on the churns and firkins to keep harm away. Looking back, it was a different time and place and the people did what they thought was right. It is hard to make a judgement as we are all their descendents.