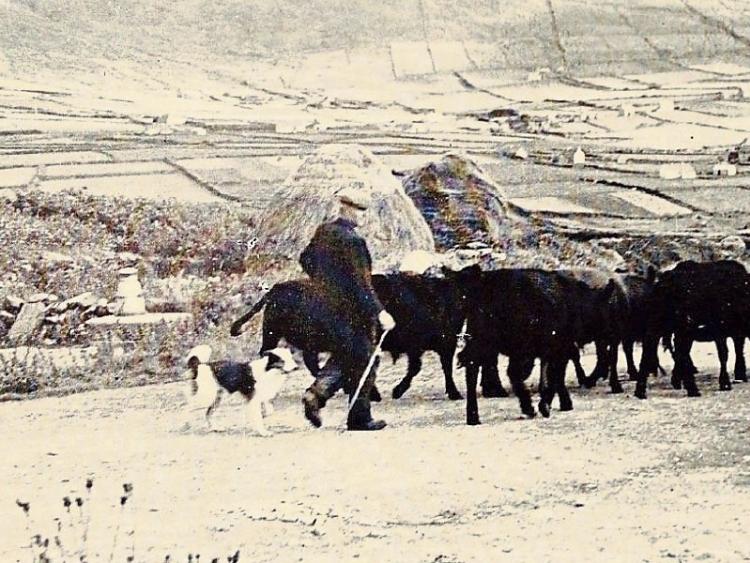 BIGGER AND better is the way of the world as everything changes in this fast-paced life we live. A friend of mine was recently discussing the changes in farming and the side effects it has on our wildlife population.

He recalled his days growing up on a small farm and the pleasant sights that surrounded it. The small fields were divided by ditches, adorned by the milk white blossoms of hawthorn, and the grass was dotted by a splendour of flowers, clover, buttercups, ox-eye-daisies, and other varieties of wild flowers. The fields had their own names and it was easy to identify all the near neighbours land. At present the hedgerows have been replaced by electric wires to facilitate strip feeding.

My friend knew every square yard so intimately when he was young but now, he is saddened by the changes. In the past there had been fields of one or two acres with a network of criss-cross hedgerows between them , there is now a succession of multi- acre fields, each of them a fair -sized farm in itself. The fences are gone and with them the shrubs and plants-blackthorn, whitethorn, and briars which gave shelter and homes to birds, butterflies, and insects. No field in those days was ever tilled closer than six feet from the fence, and there was always a "head-land" at the top of every field.

That was the era of mixed farming when farms were a mixture of tillage and pasture. As well as the cows and calves, every farmer grew their own food potatoes and vegetables. They also grew a patch of oats or barley as well as fodder beet and Swedes. It is not only the fields that have changed over the years. Where once there were marshes, wet boggy overgrown with rushes and furze, home only for the hare and the snipe, there is now almost everywhere, green pasture land. This is thanks to the arrival of the heavy digger, which replaced the spade pick crowbar and shovel. Mixed farming has been abandoned to accommodate machinery and the demands of the EU. On individual farms the plan has been to concentrate into large units; ranches of milch cows, acres of potatoes, prairies of barley, and oceans of oilseed rape.

But it is not just the dimensions of space that has changes; so, has that of sowing time. Spring sowing, that allowed birds to forage on tilled ground and then rear young among growing crops, became impossible once new seed varieties for autumn sowing were perfected. Crops have become cleaner of weeds as a result of effective herbicides. Earlier harvesting of silage meant that nesting standing crops became a death warrant for birds like the corncrake. Applications of lime, slurry and artificial fertilisers, plus drainage boost yields, and tractor-mounted sprayers kill the so called "weeds". The existing pasture is obliterated with herbicide and the ground is reseeded with unfamiliar grasses, typically ryegrass, bred for fast growth.

The wildlife of our country areas has been bound to suffer as a result of the changes in the terrain and the wholesale destruction of natural habitats said my friend. The common snipe and the jack snipe have reduced noticeably due to the destruction of marshes and bogs. Jack snipes, the smallest of the family and winter visitors from Scandinavia, are found in very wet land and make a sound like a goat. Hence the name Gabhairín Reo, meaning little goat of the frost. To hear jack snipes calling was taken as a sign of frost to come.

The woodcock, the prince of all Irish game birds , has suffered as much as his smaller cousin, the snipe by the changing countryside. Like the snipe, he is equipped with a long beak for probing into marshes and water-logged bogs. The skylark ( fuinseog in Irish ) has suffered extremely because of farming practises. Of all birdsong the skylarks have perhaps inspired more poetry that has any other. They have disappeared from most of the country and are found only where there is uncultivated ground and on the islands.

The corncrake, the wonderful welcome summer visitor of my friend's youth no longer comes, the victim of the silage cutter. There wasn't a hayfield , a meadow or an oat field in early summer that hadn't its corncrake chorus in his youth, and while he seldom saw him people learned to love him. The corncrake was more your friend than ever the elusive cuckoo was. While the cuckoo was a flitting voice, usually heard at a distance , the corncrake was near you, all round you. His unmusical but strangely impelling song was an important part of early summer. Once one corncrake raised his rasping voice in a meadow, a dozen of his kind rasped back at him, a disharmony of rasping sound that turned to sweet music the more you listened to it. Sadly, a music that we never hear today concluded my friend.

At present it is illegal to remove cut or destroy hedgerows, and burn vegetation between March 1, and August 31 so that breeding birds can be protected. There are certain exemptions for such things as road safety. The main reason for the ban is to protect nesting birds, because woodland is a relatively rare habitat in Ireland. Our birds and some insects and mammals are particularly dependant on our rich heritage of hedgerows. Nesting birds and their eggs and young are particularly vulnerable to predators and depend largely on concealment for protection. If the hedge is cut during the breeding season the presence of the nest is revealed to magpies, squirrels crows and other potential nest robbers.

Our hedges are in effect narrow strips of woodland, and very important habitats for all forms of wildlife. They are home to all 37 species of shrubs and trees and 105 species of wild flora. The older the hedge, the greater the variety. Hedges are regarded as unnecessary by many despite research showing the value of them. Spring and summer cutting are very bad for the hedge as most Irish hedgerows plants are deciduous trees and shrubs.

If you cut them while they're actively growing, they bleed sap and loose vigour. This is exacerbated by the fact that the various types of machine used to trim hedges do not cut the branches neatly- they scarify them , removing large strips of bark, which benefits neither the hedge recovery nor its appearance.

Teagasc, offers the following guidelines: Hedges should be trimmed, in season, in a triangular shape with a wide base, leaving some trees to grow on. Cut stems above the last cut, leaving up to 12mm of new growth. Cutting back to the same level each time depletes the energy in the hedge. While light annual cutting is good for the hedge, it's not best for wildlife. A good compromise is to cut every three years, in rotation.

THE PEOPLE of Abbeyfeale and surrounding areas came out in force to the Glórach Theatre last Friday evening to celebrate Liam Flynn's achievements as an award-winning wood turner. All seats were filled in the comfortable venue with an overflow of people in the entrance area. An exhibition of Liam's work was on display , and a short film documenting how he went about the process of woodturning was screened. A short presentation was given by Yvonne Mc Enery his aunt, Joe O'Keeffe his woodwork teacher, and Mary Leahy his partner. A book about Liam who was a very private person is to be published later in the year, should be of great interest. It was a very enjoyable event and a great way to celebrate National Tree Week, and the wonderful contribution of craftsman Liam Flynn.