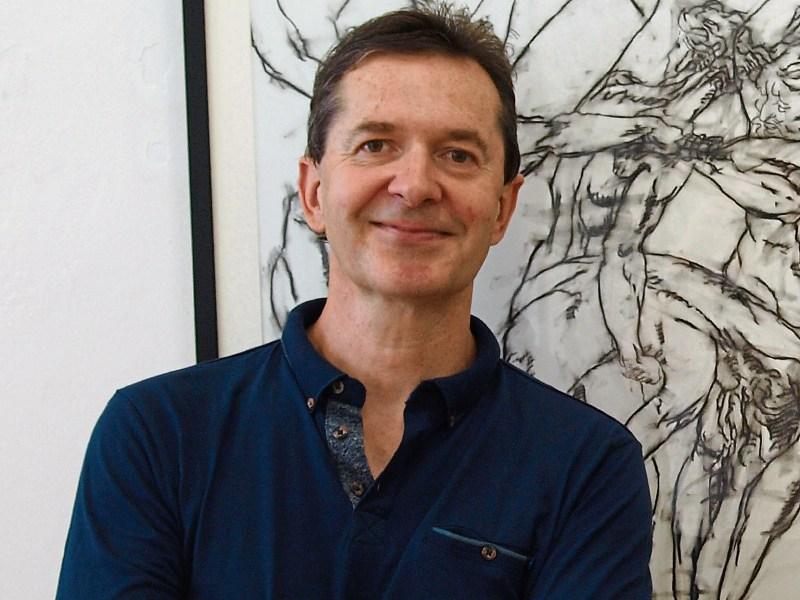 Born in Limerick I have lived in many places over the years.

For example, I was educated at Limerick School of Art and Design, the Royal College of Art, London, the École Nationale Supérieure des Beaux-Arts de Paris, and the University of Limerick. As a kid I built a ‘studio’ in my parents’ garden where everything from my world was gathered and analysed, through drawings and 3D models. My grandfather, my mother, and my sister, were all architects, so I guess working visually is in my DNA.

A painter by instinct I usually work using oil on canvas or drawing with black Conté Chalk on paper.

I used to work on each painting for years, however, now I make each new idea into a single image which I feel has greater clarity as a story. Even when I am not in the studio I am collecting shapes, colours, textures, and marks, seeing how they can relate to a present work or how they might inform new pieces. The work tends to be very large because of the physical impact.

At present I have an exhibition at the Consulate of Ireland in Shanghai, China, and I am also curating a number of other exhibitions in Limerick and China over the coming year.

These include a project for Bishop Brendan Leahy entitled ‘Art in Churches’ which will take place in thirteen Limerick churches where each church will host an art work with accompanying text. Indeed, throughout the year all thirteen works will be rotated through these thirteen churches. The idea is that churches were the original art galleries where the public experienced an artist’s interpretation of a given narrative. A second related project entitled ‘Visual Reminders of Invisible Light’ will be shown at the Hunt and Limerick Museums in December 2018. In 2019 I will be curating an exhibition of ten Irish artists which will tour China over the course of the year.

Art may be defined as a deep rooted ‘need’ to begin a conversation with your audience via multiple platforms be they; galleries, museums, online, social media, or through books.

I also tend to collect experiences as information, which then becomes the building bricks, to construct a visual dialogue between the painted work and the viewer. My works, therefore, are always built-up from layers of different memories and visual information; because I believe that we see through our experiences, which continually form multiple updated narratives about our world. For example, a person who has been in a fire will see a fire in a very different way from someone who has not. Retelling an experience using a visual narrative has always been a part of who we are as human beings. The oldest forms of communication we have are cave paintings, most of which are as fresh today as when they were painted. We study ancient civilizations from the remnants of their visual culture, forming images of their lives; thus becoming an artist is entering into this ancient history of conversation.

Most art colleges in Ireland are by and large irrelevant and redundant, mostly because the craft skills necessary for communicating in a visual narrative format are actively denigrated.

Thus, students are expected to communicate without being given the tools to analyse and disseminate the information they are dealing with. We wouldn’t treat other subjects in third level institutions with the same stupidity. In effect, students spend four years in college passing the time for a career that doesn’t exist then most of them have to return to college and train for a career that does. Artists have, therefore, to be multi-skilled and to constantly reinvent themselves and their work in order to survive as practicing artists. Interestingly the most successful artists operating across the globe today are the ones with highly developed craft skills. Being an artist only happens when a person is out in the world but it takes years of constantly working to form an intelligent conversation. I tend to exhibit a lot outside of Ireland which has definitely helped me to survive and when I travel abroad I am always amazed by people’s knowledge of Irish contemporary culture.

Frequently influenced by events from my own life my current work is based upon the human form, looking at who we are and how we react to each other.

The ‘Doubt and Belief’ (the title of my recent solo exhibition at Limerick Museum) we have about ourselves is of course a given. Previous to this, I worked on a series based on kayaking in the bay in Toulon, France. I was trying to describe the experience of being on a tiny craft off shore, looking at the coast as it dissolves into mists and heat hazes.