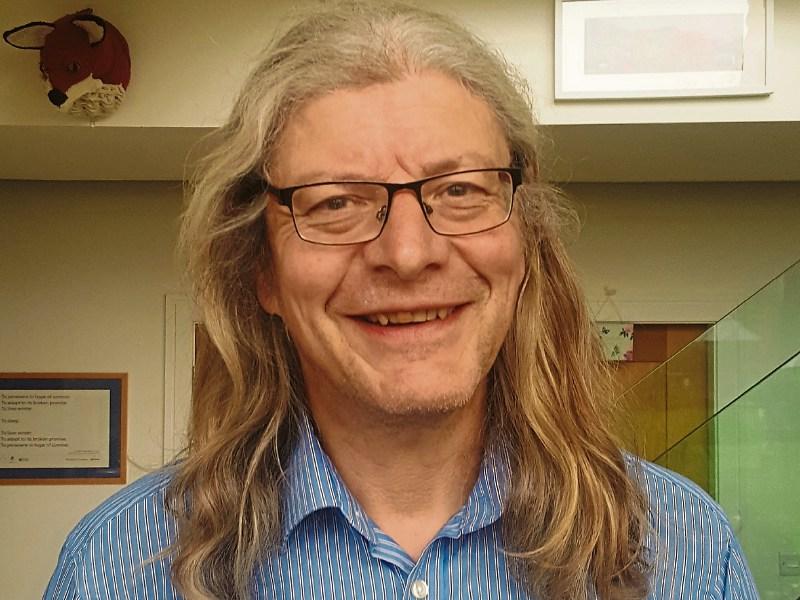 Living in England until I was 11 years old the family then moved to Limerick.

I went to secondary school at The Crescent College Comprehensive for whom I played rugby before studying dentistry in Cork, where I met Julie who was studying medicine. We got married very young, and still in college, but here we are, happily married after 36 years. Castleconnell, on the banks of the Shannon, has been our home since 1991. We have two little dogs, a cat, and three daughters, two of whom are doctors. Our youngest is in college training to be a dentist so very much a chip off the old block.

Interested in art for as long as I can remember, my mother paints and my grand-mother was also a keen artist in her day.

Even my eldest daughter pursued a degree in art upon leaving school, before going on to become a medical doctor.  So, art really is a family thing for us.  My first memory of being conscious of art was when I was just five and I completed a picture of a space rocket. It didn’t work out that well, so I said to myself, ‘I'll turn it into modern art’. Thickening the outlines and filling them in with blocks of colour, I transformed it into an abstract piece.  So, I understood even then that art doesn't have to represent anything; it can be a thing in itself.

After graduation Julie and I went to England where she studied psychiatry and I trained in orthodontics.

As if we weren’t busy enough, we had our three children while we were working and studying; so that really left no time for art. It was only sometime thereafter that we came back to Limerick, and with the family now being older and our careers established, I became interested in art once again. To ease myself into it and to practice my drawing skills, I went to life-drawing classes.

By 2011, with the children reared and my career well established, I felt like a new challenge so I applied to study at Limerick School of Art and Design.

I was accepted but as I needed to continue working too, the arrangement was that I would go to college part- time taking eight years to get my degree. However, I'm a fast worker and my grades were consistently good so I was allowed come to college in the morning, fix teeth in the evenings, and still go through in the requisite four year term. I specialised in Fine Art Print-Making and graduated with a First. I chose printmaking because I wanted to learn a skill rather than merely developing an artist’s way of talking, (as many in Art College seem to do!). In fact, traditional skills are somewhat undervalued in contemporary art colleges. That said, this may be changing and the ability to paint and draw is being valued once again. As for me, I continue learning and practicing my print-making skills at Limerick Printmakers in John’s Square, an organisation which is an invaluable resource for professional and amateur artists alike.

After seeing the regular stream of work being posted on my Facebook page, a friend, Moya Ni Cheallaigh, who graduated from painting in 2015, asked me would I have an exhibition.

To be honest I was filling the house and the shed with paintings and prints, so there was no lack of available material. I agreed, if she would curate it and decided to use the wonderful setting of Shannon Rowing Club on May 10 last. My debut exhibition was entitled, ‘No Pomp or Circumstance’, and featured a wide range of paintings and copperplate etchings documenting my daily life and wanderings around Castleconnell, Lough Derg, and Limerick. We were delighted to have Fiona Quill, who is a lecturer in LSAD’s Print Department, and the current Chair of Limerick Printmakers, to open it.

In art the message can be intellectual or emotional with some artists using art to push ideas or political beliefs.

However, for me, art is an immediate and instinctive response to the world around me; the physical world, specifically light on surfaces; light on snow and water, or coming through the leaves and branches. My work communicates the joy of being a witness to the physical beauty of the world. All I’m saying, if I am saying anything at all, is to look at how beautiful our world is and to take pleasure in just being in that world for the moment. There is nothing pompous or grandiose about that!