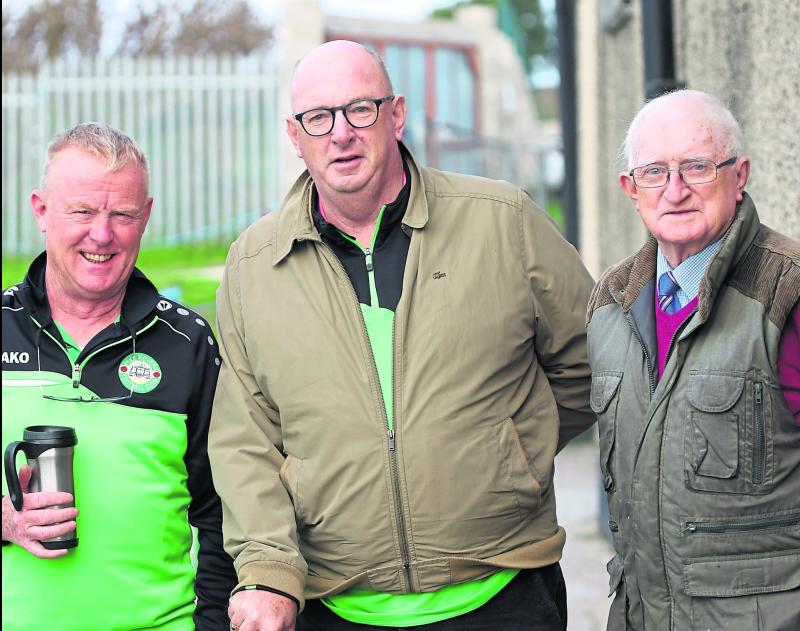 Sean Malone, Paul Neville and Kieran Honan at the meeting of Pike Rovers and Newtown Rovers in the first round of the FAI Junior Cup on Sunday Pic: Brendan Gleeson

IT'S Munster Junior Cup time again this weekend in Junior Soccer with a number of intriguing ties on offer.

The remaining Premier sides have avoided each other in the second-round draw but a number of them face tough assignments before they reach the next phase.

Holders Fairview Rangers meet a very good Regional Utd B side. United lead the way in Division 1A and have some players well capable of mixing it in the top flight but the strength of the Fairview squad should overpower them.

Janesboro had a good win last weekend over Charleville which they hope will kickstart their season. They meet a very good Newport side who come into the tie on the back of a 2-1 win over Geraldines in the FAI last weekend.

Regional Utd lost 2-1 to Aisling in the league last weekend and will be looking for an immediate bounce back. They travel to Athlunkard Villa, a renowned cup team, well capable of causing an upset so caution is advised.

Joint Premier League leaders Aisling Annacotty A were excellent in a 2-1 win over Regional last week and seem to be clicking into the right gear at the right time.

They take on a game and hard-working Hyde Rangers side who went very close against Nenagh last weekend. They may find Aisling another step up.

Carew Park were poor by their standards when exiting the FAI at the hands of Balla last weekend. Albert Slattery will be demanding a big improvement when they travel to Corbally Utd.

Nenagh AFC are on a good unbeaten run and they will be expected to extend that when they host Division 1A side Star Rovers. The Parish side started the season slowly but seem to be back on track of late.

Summerville B will have no preconceived notions of the task facing them when they host Pike Rvs. The Hoops put twelve past lower league opposition last weekend so Summerville can expect a rough ride.

At the time of writing Ballynanty Rovers don’t know their opponents for Sunday. Either Caherdavin or Granville Rgs will hold out little hope against the league’s in-form side.

Charleville will be hoping for a boost if they can see off the challenge of Moyross while Fairview Rangers B will be fancied to win at home to Croom Utd.

Kilmallock face a tricky task at home to Aisling Annacotty B while Geraldines should account for a Cappamore who were knocked out of the FAI by Brazuca last weekend.

In midweek action, we have a mouth-watering clash in prospect on Thursday evening when Fairview Rgs take on Ballynanty Rvs A in the Tuohy Cup at Jackman Park at 7pm.

The sides met two weeks ago when Ballynanty recorded a most impressive 4-1 win over their rivals.

Balla were superb on the night and Fairview’s response was akin to a deer in the headlights.

You feel Paul Danaher and Paul O’Donnell will ensure that their side will not be caught cold this time out.

That said, Balla showed again in last weekend’s 3-0 win over Carew Park that they are a side full of confidence and their high paced game is proving a hard ask for most sides.