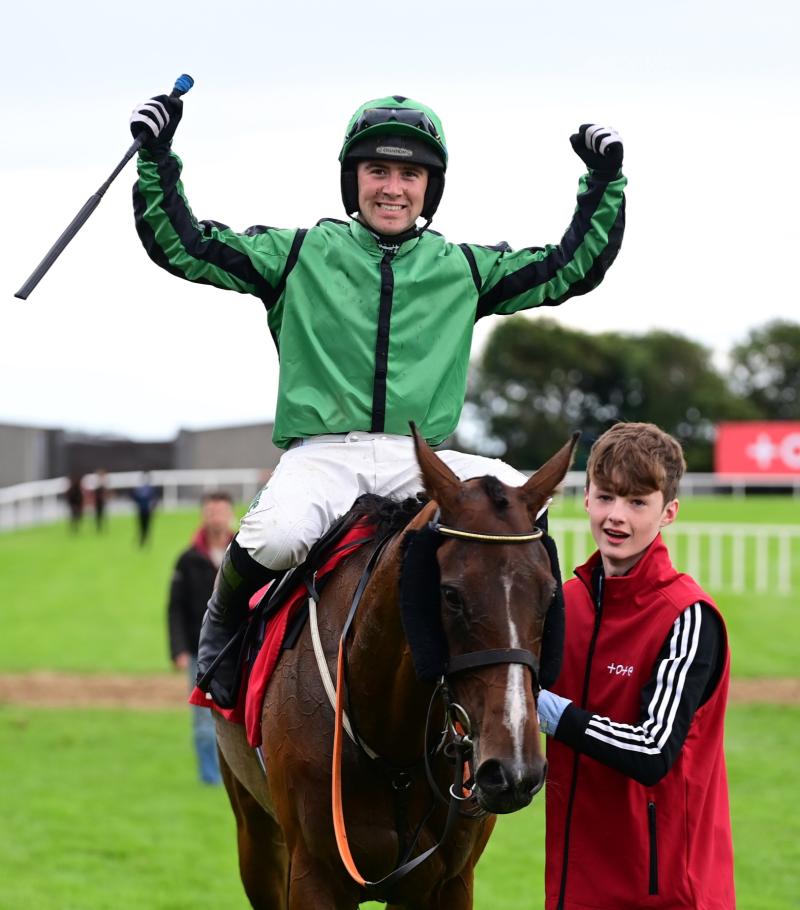 Hewick and Jordan Gainford celebrate after winning the Tote Galway Plate in July for trainer Shark Hanlon. Hewick carries top-weight for the Guinness Kerry National at Listowel this Wednesday

ALL the big guns have stood their ground for what promises to be a thrilling Guinness Kerry National at Listowel on tomorrow Wednesday.

The race is the €200,000 highlight of the seven-day Harvest Festival, where Hewick will carry top-weight in an attempt to follow up his dramatic victory in the Tote Galway Plate.

The story of Hewick is one of the most heartwarming rags to riches tales in Irish racing in recent years as the horse who cost just €850 at Goresbridge in 2017 has landed the bet365 Gold Cup at Sandown and the Tote Galway Plate in 2022. That big win at Ballybrit back in July was achieved despite a loose horse almost stopping him in his tracks up the home straight.

Now Shark Hanlon has his eyes on another big prize but Hewick will need a monstrous performance to defy a career-high mark of 163 which will see him carry 11st 12lb. Jordan Gainford, who has been on board for three of his seven career wins, once again takes the ride.

The 1-2-3 from the Tote Galway Plate will all renew rivalry at Listowel as runner-up Darasso and the third home El Barra have both been declared.

Willie Mullins dominated the opening day of the Harvest Festival with four winners and El Barra looks the champion trainer's best hope of winning the Kerry National for a second time in three years following the victory of Cabaret Queen in 2020. Paul Townend takes the ride.

Joseph O'Brien added a Kerry National victory to his ever-expanding CV in 2021 when Assemble won at 9-1 under Shane Fitzgerald and the dual-purpose trainer is responsible for a third of the field in his search for back-to-back wins.

The aforementioned Darasso will be the mount of Mark Walsh, while Fire Attack, an early casualty in the Tote Galway Plate when well fancied, will be ridden by Bryan Cooper. A Wave Of The Sea, Early Doors, Busselton and Embittered complete the six-strong challenge from the O'Brien stable.

Henry de Bromhead looks to have a live chance in the shape of Gabbys Cross, winner of the Blazers Handicap Chase at the Galway summer festival.  Rachael Blackmore, who was on board De Bromhead's first Guinness Kerry National winner Poker Party in 2019, stays loyal to the seven-year-old following their stylish success together at Ballybrit. The other De Bromhead representative is the mare, Gin On Lime.

Freewheelin Dylan, the shock 150-1 winner of the 2021 Irish Grand National at Fairyhouse under Ricky Doyle, will represent Dermot McLoughlin who is looking for his first win in the race.

A maximum field of 18 will line up for the Guinness Kerry National which is due off at 4.20pm on Wednesday and will be shown live on TG4 and Racing TV.