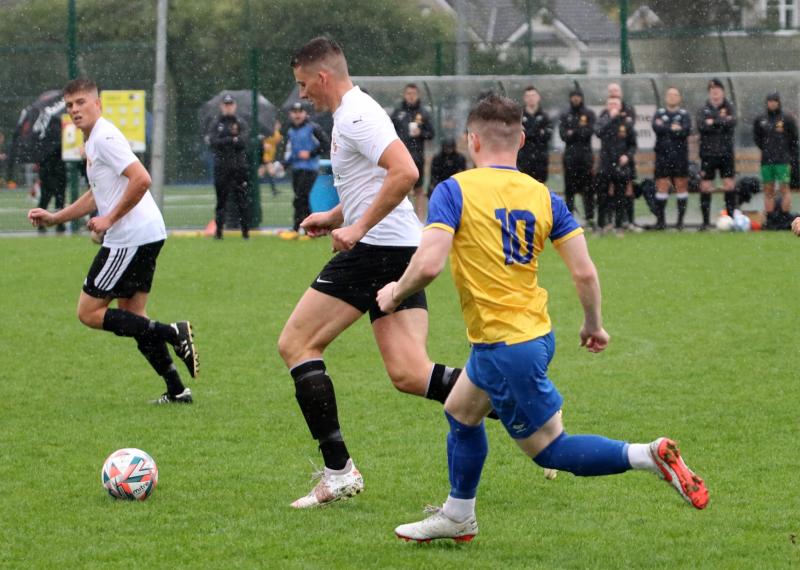 First half goals from Kevin Barry and Aaron Murphy put the Hoops on their way.

Murphy went on to complete his hat trick after the restart while Danny O’Neill completed the scoring.

Coonagh Utd hosted Charleville in an exciting Munster Junior Cup tie which saw the visitors pip their Premier rivals with an extra time winner to advance to Round two of the tournament.

Ger Myles put Coonagh in front in a first half in which they dominated.

However, straight from the centre off, Charleville levelled the tie through Shane Dillon.

The same player went closest to settling the tie in 90 minutes but his effort struck the upright.

The Charleville striker was not to be denied however and he grabbed the winner in extra time to set up a clash with Moyross in the next round.

The second all-Premier tie resulted in a 2-0 win for Nenagh in Mungret.

The Tipperary side have been in a fine vein of form and Sunday’s result makes it six game unbeaten for Cillian Fitzpatrick’s side.

Adam Ryan put the visitors ahead just after the half hour mark and an evenly balanced tie was not settled until the dying minutes when Dylan Morrison tacked on a crucial second for the winners.

The Premier League’s top scoring side, Regional Utd hit Pike’s B side for eight without reply on Saturday evening.

Joe Lavan, Andrew Cowpar and Eoin Duff bagged two apiece while Connor Finn and Hugo O’hAnluain made up the tally.

Munster Junior Cup holders Fairview Rgs returned to form on Sunday when they defeated Aisling D 7-1 to set up a round two date with Regional Utd B.

Following a shock result last Thursday, Fairview were determined to bounce right back.

Jason Lipper’s penalty kick levelled the tie at 1-1 but it was only temporary respite for the Division 2A leaders.

Janesboro put their Premier League worries to rest on Sunday when they beat Caherdavin 3-1 to advance in the provincial competition.

There was little between the sides in the opening half until Cillian O'Shea’s persistence paid off with the opening goal.

After the break Jack Horan and William Glass added further scores for the winners.

Aisling Annacotty eased into round two where they will meet Hyde Rgs following a 7-1 win in UL against Brazuca Utd A.

Carew Park will meet Corbally Utd in round two of the MFA following a 5-1 win over Mungret Regional on Sunday. Gary Griffin, Adam Dore, Jonathan Grant, Aaron Nunan and Gavin Hehir were the winning marksmen.

Elsewhere in the Munster Junior Cup competition, it was more of the usual with a number of ill-matched ties producing lots of goals.

Corbally Utd and Star Rvs both scored nine against Coonagh Utd B and Kilfrush respectively.

Fairview Rgs B beat Summerville Rvs A 4-2 on penalties after the sides finished 3-3. Zak Sheehan (2) and Evan Ezekannagha scored for the winners, Emanuel Alfred (2) and Evan O'Grady doe Rovers.

Cian Power and Brian Mackey were on target for Murroe but they went down 3-2 to Regional Utd B who had scorers in Gerry Fitzpatrick, Stephen Coughlan and Ben Carew.

In the FAI Youth Cup Aisling beat Newport thanks to scores from Alex Keating, Sean O'hAodha and Jack Dolan.

Janesboro advanced at the expense of Mungret Reg courtesy of strikes from Nathan O’Shea (2), Calum O'Connell and Alex O'Toole.