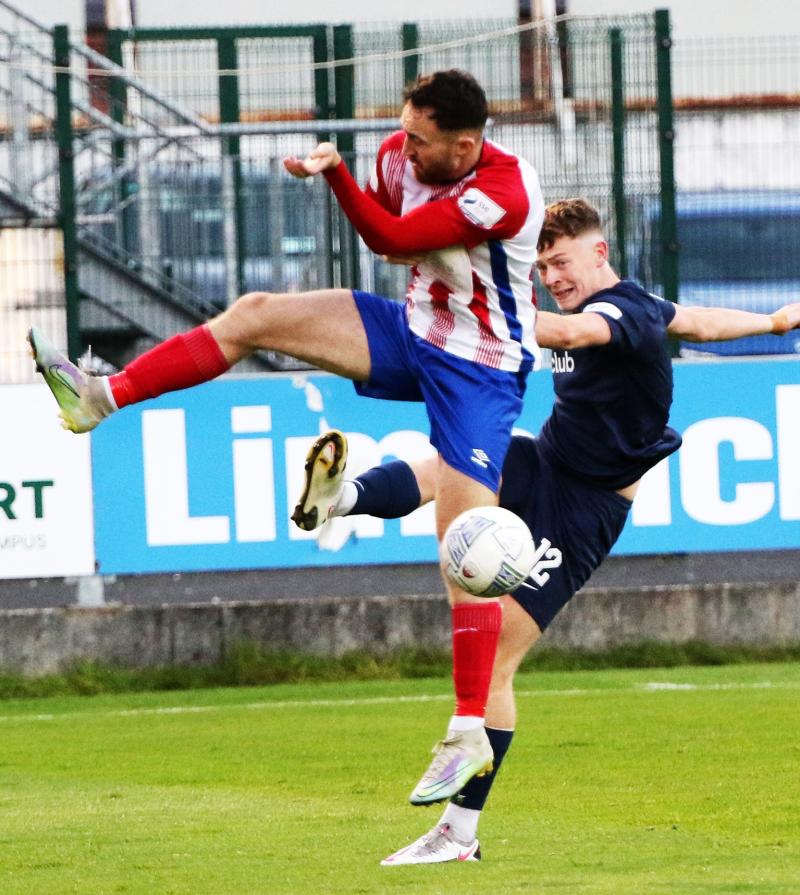 Stephen Christopher and Dean George netted in Limerick, while Adam Lennon and Pat Hickey won it for Athlone at Lissywollen, opening a nine-point gap between Tommy Barrett’s fifth-placed charges and Wexford in sixth.

Before a ball was even kicked, Treaty were dealt a huge boost.

A quick glance at a teamsheet or a sharp ear would have picked up the return of club captain Jack Lynch.

Ironically he’d be the only change from the side that dug out a one-nil win against Cobh last week. That result came off the back of Tommy Barrett returning to the last eight of the FAI Cup – but with the focus back on league matters, and six points being the cushion ahead of sixth in the playoff hunt, there could be no doubt about priorities.

Bray had yet to taste victory over the Shannonsiders, but they had just racked up consecutive wins to give themselves a sneak of nabbing a top-five spot. That gave this game an edge.

And you could see it from the off.

Both sides struck the woodwork in the opening ten minutes and if that wasn’t enough early action, the opening goal came just after.

Marc Ludden’s energetic parading down the left flank has become a Markets Field staple and after he was fed with room to run into, his teammates knew to burst a gut.

Stephen Christopher was the man to benefit on this occasion; stopping his run just inside the box, where he met Ludden’s pull back perfectly to fire past Stephen McGuinness.

Treaty began to turn the screw at this point and when Dean George found himself one-v-one, he crumbled under the simplicity of the chance and the hosts saw their best chance of doubling their lead disappear into an illuminated Garryowen sky.

Well, for roughly thirty seconds until he made amends.

Stephen Christopher’s delivery into the box after George himself was fouled down the left was pinpoint and George’s flick to the far post was aesthetically pleasing.

As is often the case with the home side, they made it tougher for themselves after allowing substitute Callum Thompson to set up a grandstand finish, finishing from a tight angle, but they hung on despite late pressure.

Treaty return to action at the Markets Field on Friday next when hosting Premier Division UCD in a tasty FAI Cup quarter-final tie, 7.45pm.