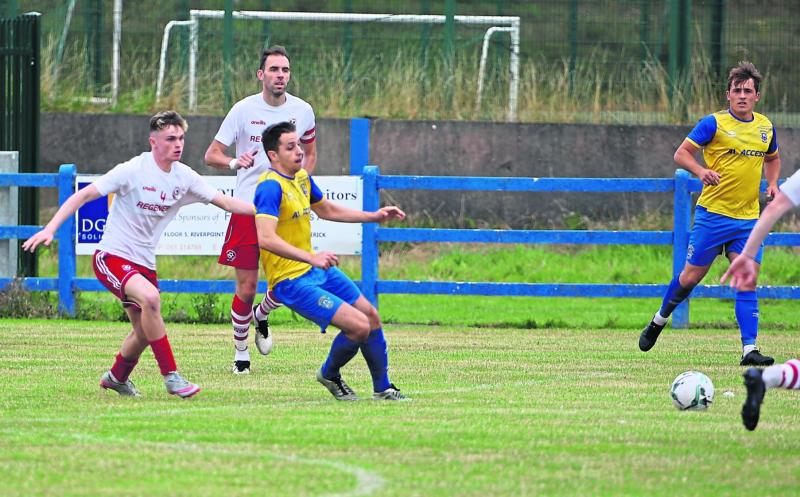 Shane Duggan, of Fairview Rangers, comes under pressure from Ross Fitzgerald, of Regional United, in their Premier Division fixture at The Fairgreen Pic: Brendan Gleeson

Two days earlier, the same opposition fought back from two goals down to force a share of the spoils with Carew Park. So, with both teams eager to right their wrongs, we should be in for an entertaining tie.

On paper, Aisling have one of the strongest squads in the province and things were going smoothly until last weekends hiccup. Manager John Lysaght will be keen to ensure it was a one-off.

Carew Park have been a revelation since their return to the top-flight. Vastly experienced, the squad is filled with Premier League winners, and they have the know how to make life difficult for any opposition.

They tired towards the end of their 3-3 draw with Ballynanty and will no doubt have worked on that element since.

With Fairview and Pike on full points, dropping any further points, even at this early stage, could prove very damaging to any hopes either team have of winning the title.

League leaders Fairview Rgs will be expected to retain their advantage when they host Janesboro. The Blues were very impressive when beating Regional Utd last weekend. Conor Ellis looks back to his frightening best and with Darragh Rainsford and Conor Coughlan also buzzing, they can be a daunting prospect.

Janesboro were forced to regroup when losing a host of players before the start of the season and are gradually rebuilding. Unfortunately, they may have to endure a hard slog getting to where they want to be.

Champions, Pike Rvs went without a game last Sunday due to damage to Carew Park’s goalposts. With a couple of important games coming up in the next couple of weeks they will be glad to get back to action.

They host a Mungret Regional side who have been slow out of the traps.  Richie Burke has assembled a fine squad and on their day are capable of matching the best. However, confidence is low currently and the last thing you need at this point is an eager Pike Rvs XI.

Two teams who suffered a couple of defeats in the opening week, Charleville and Nenagh AFC, bounced back well to get back to winning ways last week. They face each other on Sunday in Charleville.

Coonagh Utd are another side who have found the going tough to date. The point they picked up v Regional Utd will give them belief and they will be hoping to add to their tally this week.

They are much better than they showed in the Fairgreen and they will be determined to prove the point.

Prospect gave their second walkover last weekend which, by the rules, would suggest their season is now over so their proposed game with Ballynanty Rvs will not take place.