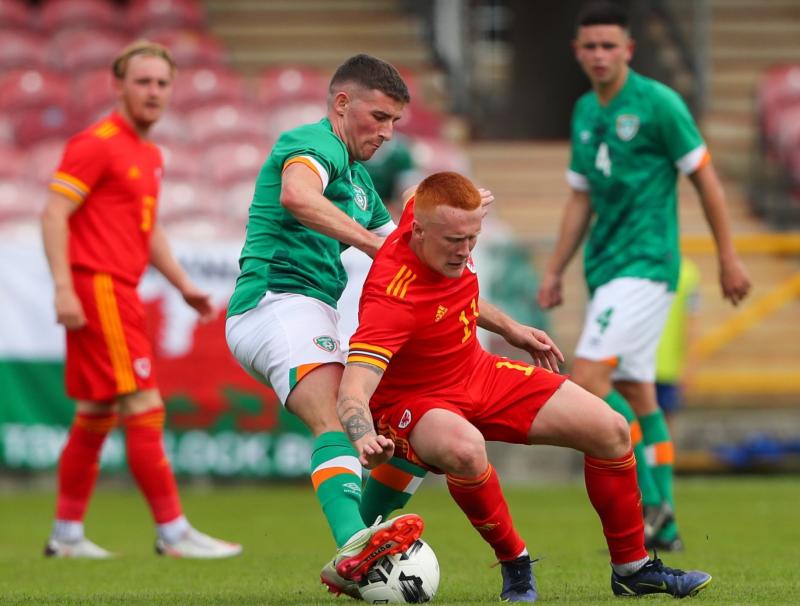 Chris Smith, of Republic of Ireland, in action against Dylan Allshorn of Wales during the Amateur International match at Turners Cross last month

Defender Chris Smith, of Aisling Annacotty, and Newcastle West native AJ O'Connor, Fairview Rangers, are included in the Ireland squad for the international fixture which takes place at Colwyn Bay on Saturday, September 3. This is a return fixture against Wales following Ireland's 2-1 win in the first fixture of the double-header at Turners Cross earlier this month.

Goals from Eoin Murphy and a stunner from Luke Casey secured the impressive victory at the Cross and Gerry Davis' side will be looking for a similar result on Saturday, September 3, with kick-off at 2.30pm.

Both goalscorers, Murphy and Casey, are included in the squad as well as Malahide United defender Glen Daly, who scored against the Ireland U20s in March, has recovered from injury after being ruled out of the first match.

"It was an excellent win at the Cross and we'll be looking for a similar performance over in Wales," said Ireland manager Gerry Davis.

"We learnt a lot about the opposition and they showed real quality on the day so they'll be looking to get one over us and will be determined to make sure we don't win over there so we've got to be right at it.

"The quality of the goals last time were outstanding. Luke's goal in particular was incredible but him and Eoin are two lads full of confidence and that is great for the group.

"We want to build on that win and get another one but this time, away from home which definitely adds that extra motivation. It is our first-ever trip to Wales as an amateur international team so it would be great to make the first one a victory."