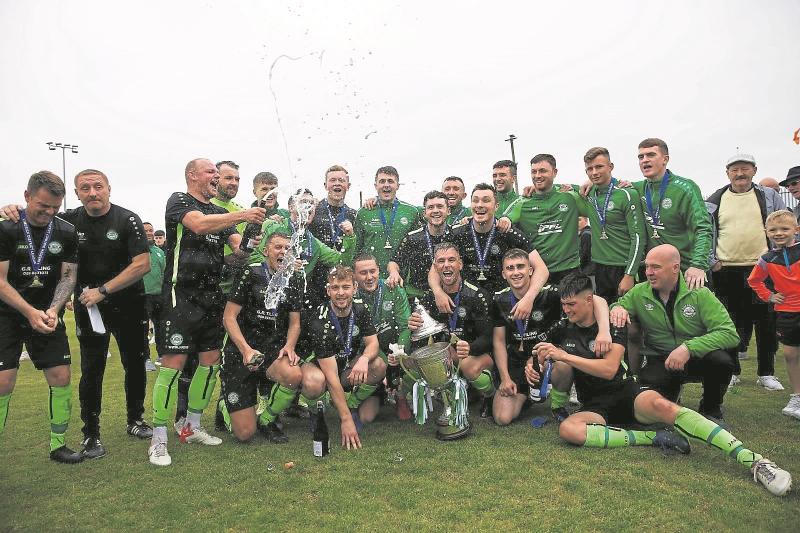 Champions Pike Rovers host Ballynanty Rovers in what promises to be an intriguing game so early in the campaign.

Following their thrilling capture of the title Pike Rovers have lost the services of Paddy O'Malley, Conor Layng and Ger Barry, all moving out of Limerick.
Reserve keeper Tommy Holland moves out but the Hoops have added Ennis keeper Sean Moroney to compensate.

Sean Madigan joins the club from Regional Utd and John Connery makes a return to Crossagalla from Ballynanty Rvs and he will face his old team mates on Thursday.

It has been a busy close season on the northside as Balla waved goodbye to Jason Hughes, Aaron Nunan, Conor Ellis, Jake Dillon and John Connery.
On the credit side the Blues add the highly impressive Habideen Gbadebo from Moyross along with his former team mate Cian Power. Desmond League star, Thomas O’Connor is a serious signing while Dylan Kelly Higgins (Prospect Priory) and Rhian O'Connell (Treaty Utd) return to the club.

Fairview Rangers fell at the final hurdle last season and will be determined to go one better this time out.
They must do so without Jamie Enright and Mark Slattery and Jason Cross but they have added a superb duo in Conor Ellis and Jake Dillon from Ballynanty Rovers.
If they can get Ellis back to his best, they might solve the one position that dogged the last season.

At the time of writing Coonagh will make do with their squad from last season but under the guise of a new management team of Ian Connolly and Paudie Hickey.

Charleville make a welcome return to the top flight. They have an excellent manager in Adam Castle and while they lost Donal O’Connell, they have added Aaron Smith and Josh Hudner along with three players from last year’s youth team, Eoin O'Connor, Dion Curtin and Colin Quaid.

Carew Park return to the top flight after a short absence and they open their account at Mungret Reg. Albert Slattery has been busy in the close season and has added significantly to his panel.
Kieran O'Hanlon returns to the club from Treaty Utd. Former Premier League winners with Carew, Jamie Enright and Mark Slattery return from Fairview along with youngster Jason Cross.
Proven goal scorer Aaron Nunan also signed along with Michael Guerin from Coonagh Utd, Adam Feeney from Waterford and former Pike man Darragh Walsh.

Janesboro take on Prospect Priory with Shane O’Hanlon back with Daithi O’Donoghue trying to revive ‘Boro.
They finished top of the bottom six last season with impressive campaigns for Sean O'Dwyer, Conor Madden and Kieran Long
They have lost the services of Donie Curtin but are hoping to strengthen the squad in the short term.

Prospect Priory have been having a miserable close season with a number of players jumping ship. Manager Wayne Colbert, is nothing if not determined, so it is hopeful they can get things on track for kick off.

Regional Utd host Nenagh in the final game of the top flight.
Sean Madigan has left the Dooradoyle club but another couple have returned to the fold in the guise of Jack Arra (Treaty Utd) and Donal O'Connell (Charleville) which will give them a much-needed boost in firepower.

As we’ve come to expect, Nenagh AFC retain confidence in their own and new additions Lee Mowat, Dylan Morrison and Adam Brennan will keep things fresh.