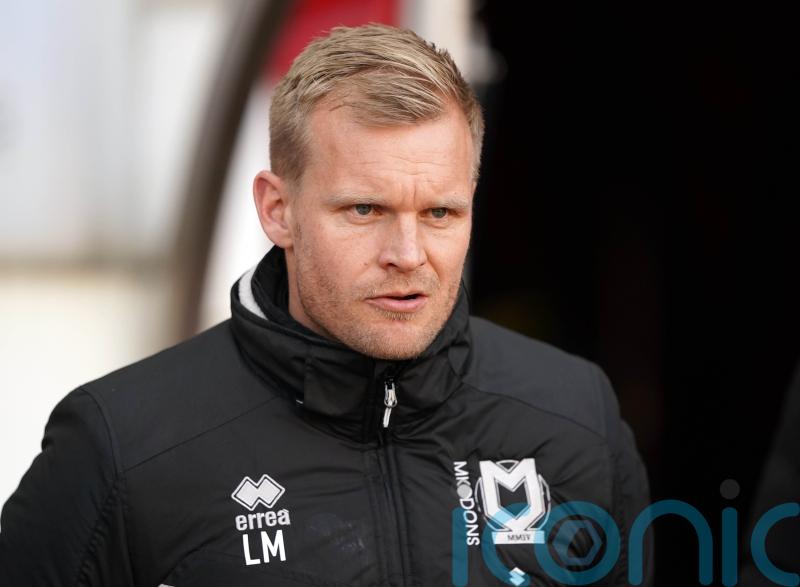 MK Dons manager Liam Manning was left frustrated by penalties given and not given as his side lost 1-0 to Sheffield Wednesday to suffer a second straight defeat.

You would not blame Manning for being sick of the sight of Owls goalkeeper David Stockdale, who made several fine saves to follow up his heroics for Wycombe against the Dons in last season’s Sky Bet League One play-off semi-finals.

It was his defiance that allowed the visitors to hold on to the lead given to them by Josh Windass’ penalty and earn their first win of the campaign, following last week’s breathless draw with Portsmouth.

However, Manning was adamant the offence that led to referee Anthony Backhouse pointing to the spot was outside the area, while he was baffled why his side were not awarded a penalty of their own in stoppage time.

Manning said: “You see it back and it was at least half a yard out of the box, so for me it wasn’t actually that tight. It was quite obvious.

“Then we didn’t get one at the end, which watching that back could have been given as well.

“The centre-half gets across and puts two hands on the back (of Matthew Dennis) which apparently is not a foul.

“That was the biggest disappointment, I think, how the game was officiated.

“We had a meeting with the EFL in the summer around managing time-wasting et cetera with throw-ins, goal kicks, players going down.

“It took an eternity and he can keep blowing his whistle and telling them to hurry up, but it doesn’t actually have any effect, so I was really disappointed with the level of officials today.”

Although Wednesday started the brighter, it was MK Dons who had the game’s first big chance as Will Grigg intercepted a poor back pass only to be denied by the first of Stockdale’s saves.

The Owls were then awarded a penalty when Ethan Robson was judged to have fouled Windass in the area, with the forward then dusting himself down to score from the spot.

The hosts posed a bigger threat after the break with Stockdale having to be on his toes to keep out efforts from Matt Smith and Dean Lewington in quick succession.

He then produced his best save of the lot by getting down low to his right to keep out Dan Kemp’s shot, as MK Dons’ wait for a first goal of the season went on.

Not surprisingly, Wednesday boss Darren Moore was full of praise for his goalkeeper’s display at Stadium MK.

Moore said: “When you look at some of the shots they had, they looked straight at him but that’s because his positional sense was good.

“The most pleasing one for me was the one that went clean through and even though the boy was under a bit of pressure from Ben (Heneghan), he got his shot off and then Stocky’s pulled that off.

“I’m really pleased for him to get a clean sheet as well, it will do him wonders.

“He was saying in there that that’s a start and we’ve shown that we can do it, and he’s right.

“As I said, he’ll take a lot of confidence from that, as we will do.

“In the second half, we dropped back and we allowed them a bit of possession and territory, which invited the pressure on.

“But I’m pleased they saw the game out, got the clean sheet and got the three points.”