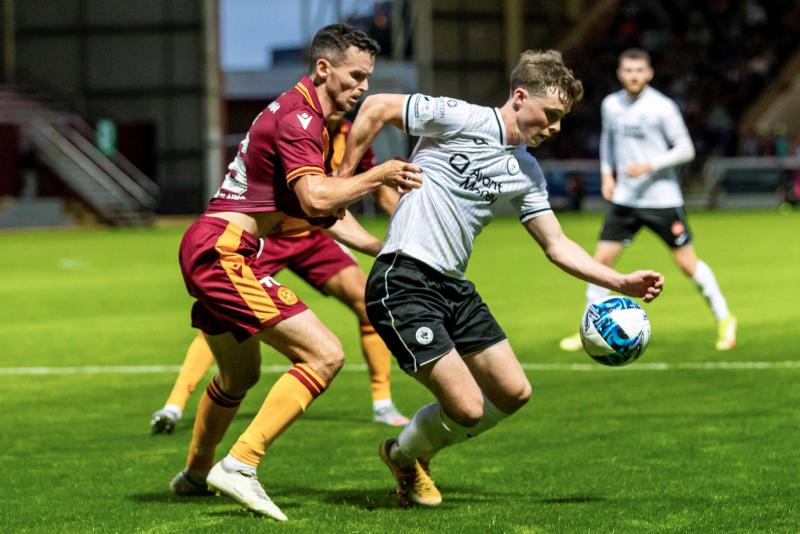 Limerick winger Will Fitzgerald in action for Sligo Rovers against Paul McGinn, of Motherwell, during the UEFA Europa Conference League second qualifying round tie at Fir Park on Thursday night

Raheen winger Will Fitzgerald and Glin's Karl O'Sullivan both played the full 90 minutes for SSE Airtricity League Premier Division side Sligo who secured an excellent 1-0 away win in Scotland.

Sligo will now host Motherwell in the second leg of their Europa Conference League second qualifying round tie at the Showgrounds on Thursday evening next at 7pm.

The Bit O' Red, who are fifth place in the SSE Aitricity League defeated Bala Town of Wales in a penalty shoot-out in the first round of the Europa Conference League qualifiers.

Twenty three-year-old Limerick winger Will Fitzgerald spent the 2021 season playing with Derry City. He joined the Candystripes from Waterford FC on a 12-month contract at the start of this year.

Fitzgerald joined Waterford FC in July 2019, having enjoyed an impressive season with Limerick in the Premier Division in 2018.

The 22-year-old has made over 100 club appearances between Harps, where he spent the last two seasons, and his former club Limerick FC.

O’Sullivan, who played more than 50 senior games for Limerick in all, made an instant impact at Finn Harps in 2020.

O’Sullivan has scored several goals against his new club Sligo Rovers, including a double for Limerick in an FAI Cup tie.