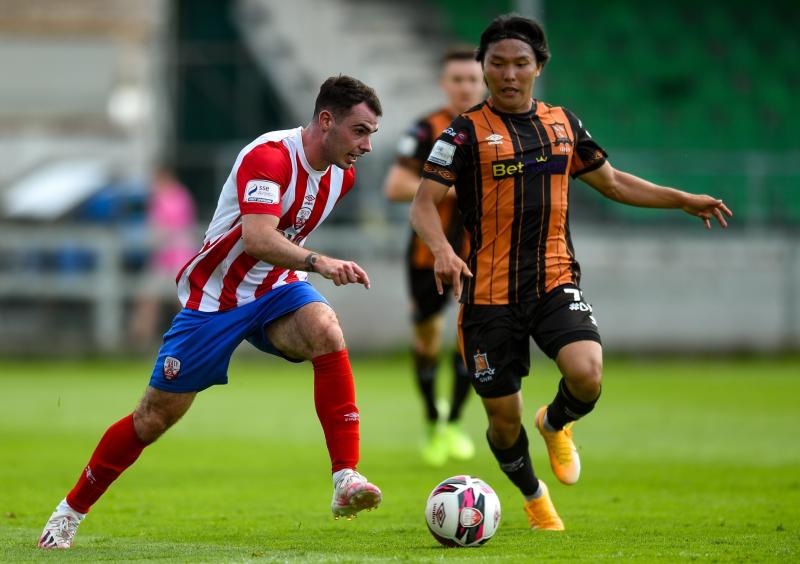 Joel Coustrain, of Treaty United, in action against Han Jeongwoo, of Dundalk, during their FAI Cup first round tie at the Markets Field last season

THE dates and kick-off times for the Extra.ie FAI Men's Cup first round which includes SSE Airtricity League First Division side Treaty United and local junior club Pike Rovers have been confirmed.

All 16 fixtures will be played on the week-ending Sunday, July 31 with eight fixtures on Friday, July 29, one on Saturday, July 30 and the remaining fixtures on the Sunday.

Tommy Barrett's Treaty United side will host non-league Usher Celtic FC in their first round clash on Friday, July 29 at the Markets Field at 7.45pm.

FAI Junior Cup finalists Pike Rovers, 1-0 winners over Everton, of Cork, in their preliminary round, make the trip to Dry Arch Park to take on Letterkenny, Co Donegal-based Bonagee United FC on Sunday, July 31 at 2pm.

The first round action will get underway at the NUI Astro Maynooth as Maynooth University Town face FAI Junior Cup winners Villa FC at 7.30pm on Friday, July 29 in the first match of the round. Bangor Celtic are set to face Shamrock Rovers at Tallaght Stadium, with kick-off at 8pm on the same night before one all non-league tie between Lucan United v Killester Donnycarney on Saturday, July 30.

Extra.ie FAI Men's Cup holders St. Patrick's Athletic begin their defence on Sunday, July 31 as they welcome Waterford as Sligo Rovers welcome Wexford at 6pm on Sunday in the final match of the weekend. LOITV details for all matches will be confirmed in due course.