Wins for Newcastle West, Adare and Ballysteen in Limerick SFC 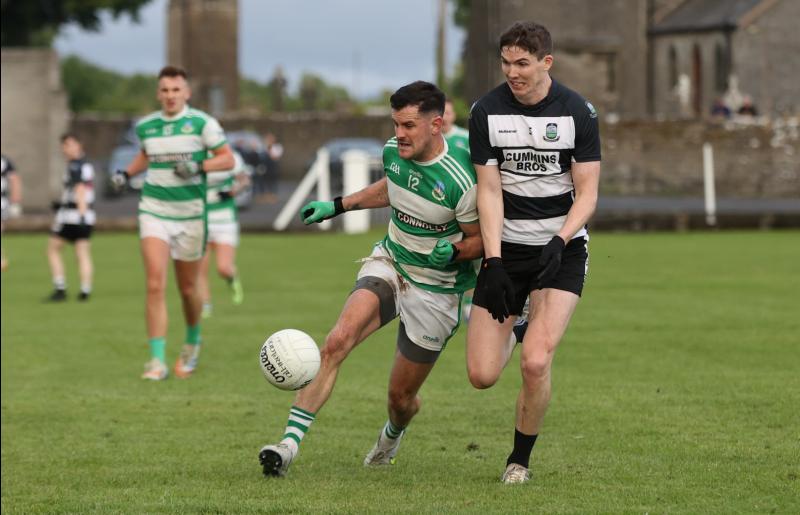 THERE were wins for holders Newcastle West, Adare, Ballysteen, while Claughaun and Galbally played out an exciting draw, on a dramatic night of opening round action in the Irish Wire Products Limerick senior football championship.

In Rathkeale, holders Newcastle West got their County title defence off to a flying start as first half goals from Sean Geraghty and Iain Corbett was enough to secure a five-point 2-7 to 0-8 win over Monaleen in a repeat of their 2021 semi-final clash.

It was Newcastle West 2-4 Monaleen 0-5 at half-time, thanks to those goals from Geraghty goal and Corbett's goal in the 10th and 18th minutes respectively.

Both sides added just three points each in a lacklustre second half as Monaleen, playing into a strong breeze in the final 30 minutes, chased the game against Jimmy Lee's resilient and defensively strong side.

Well inside the final minutes the men in red, who trailed 2-6 to 0-8, went in search of that all-important goal. But, after both sides had failed to register a score in almost 15 minutes with Monaleen clocking up the majority of the wides, substitute Cian Sheehan popped up with a late point to increase Newcastle West's winning margin to five points.

In another repeat of a 2021 county semi-final, Adare scored a 0-13 to 0-6 victory over Galtee Gaels, despite kicking 12 wides in Kilfinane.

Meanwhile, in Group 1, Galbally snatched a point from the jaws of defeat in added time when playing out a 2-9 each draw with Claughaun at Hospital.

Claughaun, who led 1-4 to 1-2 at half-time, looked on course to secure an opening night win when leading 2-9 to 1-8 as the clock ticked into added time. The city side's goals came, one in either half, from Tadhg Bennett and Cian Byrnes.

Galbally had also been reduced to 14 players late on in the contest. However, they showed admirable resolve to fight back and secure a draw with a terrific individual point from Eoin O'Mahony followed by a crucial last gasp goal from Mike Donovan.

Galbally's opening goal was scored in the sixth minute by Jamie Morrissey.

In the night's remaining county senior football fixture in Group 2, Ballysteen defeated Ballylanders 2-7 to 2-3 in Ballyagran.

Ballysteen laid the foundation for this win in the opening half after which they enjoyed a significant 10-point lead, 2-5 to 0-1.