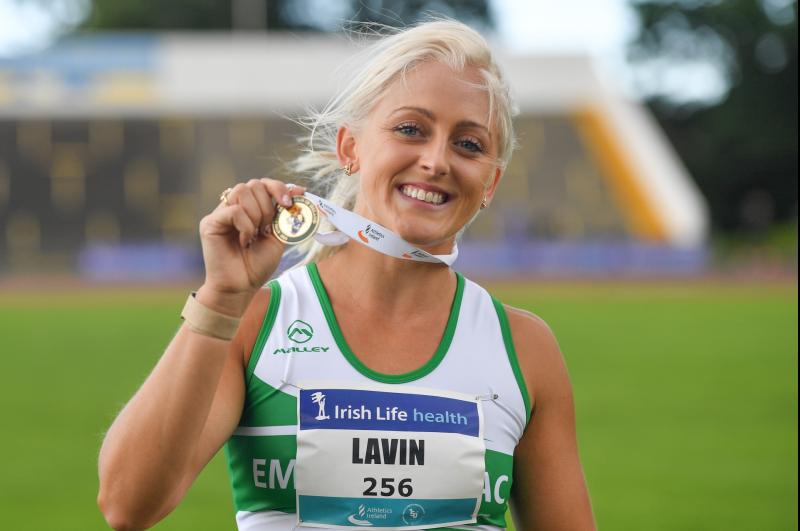 THE 150th consecutive National Championships took place over two days at the Morton Stadium Santry. One of the stars of the show was Limerick’s Tokyo Olympian Sarah Lavin who was a comfortable winner of the 100mh in 14:06- her 7th National Outdoor title . She followed that up with 4th place in the 100m (11.87) on day 2. Alana Frataroli (Limerick AC ) was 5th in the Shot Put.

Jenna Brommell ran the race of her life to come second in the final of the 800m final in 2:11.96 with Dooneen’s Sarah Hosey 7th. Victoria Amiadamen, fresh from representing Ireland was 4th in 400mh final in (1:00.95). Dooneen’s Cathal Locke qualified for the men’s 400mh final but didn’t line up in final.

Ciara Sheehy (Emerald) was second in the Discus with a best throw of 37:20, while Roisin Harrison (Emerald) was 4th in the 400m final in (53.66) in a race where Sophie Becker saw off holder Phil Healy.

The NicDomhnaill Sisters Sorcha and Ide were 2nd and 3rd in the 5000m for Donore Harriers behind race winner Olympian Fionnula McCormack. Also taking part in the 400m was Shane O’Sullivan (Dooneen).

Dooneen’s Michael O’Donoghue was 5th (2:19:12) in a tough Galtee Mountain Half Marathon. Also taking part were Kevin Broughton and Krzystof Sikorski. Well done to all taking part in the various Community Games competitions.

Robert Costello (Limerick AC) was second behind Jerry Kiernan (2:02:29) in the Inaugural Vale of Tralee Half Marathon in a time of 1:04:09. He was followed in third by clubmate Richie Clifford in 1:04:43. Tommy Madden was 15th. Weeks after Costello would do the 1500m and 5000m double at the County T&F Championships at Thomond College, Plassey.