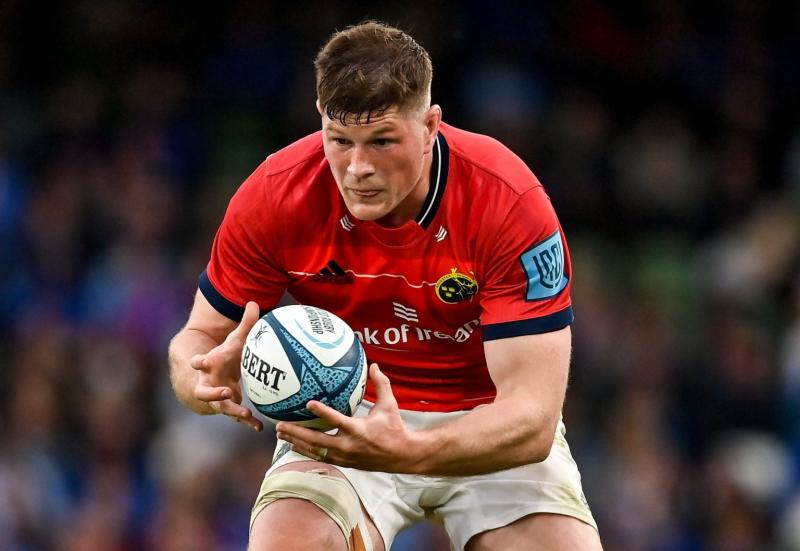 THE winners of the 2022 Munster Rugby Awards have today been confirmed with trophies presented to clubs and individuals across the professional and domestic game.

The standout performer for Munster this season, Jack O’Donoghue featured in 23 of Munster’s 26 games and clocked up more minutes on the field than any other player (1,638).

His game has gone up another level this year with O’Donoghue captaining Munster on 12 occasions, winning two player of the match awards, and ending the campaign as joint top try-scorer with nine tries – seven in the URC and two in the Champions Cup.

The Waterford man, who won the Academy Player of the Year award in 2015, has played across the back row and no matter the position, has been one of the side’s top performers week in, week out.

His all-action displays saw Jack included in the initial longlist for European Player of the Year after the Pool stages.

This season has seen the Waterpark and UL Bohemian man become the youngest ever player to reach the 150-cap landmark for Munster and he has deservedly been named Men’s Player of the Year.

Munster Women’s Player of the Year – Nicole Cronin
Listing Nicole Cronin’s credits could take a while but it goes without saying that the Ireland international and former Ireland U19 soccer star is one talented athlete.

The scrum-half turned out-half started her rugby-playing days with Richmond RFC at a young age, progressing to Shannon RFC before settling into AIL side UL Bohemian RFC as her home club.

A Limerick local, known for her quick play, decision-making skills and clever kicking out of hand, she offers a huge amount of experience to this young Munster squad and has taken to her new position on the field with ease.

Cronin was appointed vice-captain of the Women’s side for this season’s successful Interprovincial winning campaign and wore the number 10 jersey for Ireland in this year’s Women’s Six Nations.

Nicole is a player that has earned great respect from teammates and coaches alike throughout the years. Her commitment to Munster Rugby, mentorship to players, her work-rate and clever play-making makes Nicole Cronin this year’s well deserved Women’s Player of the Year.

The John McCarthy award for Greencore Munster Rugby Academy Player of the Year goes to Alex Kendellen after a fantastic season that saw him line out in 20 of Munster’s 26 games.

Kendellen has made the step up to senior rugby with aplomb and scored his first Champions Cup try against Toulouse in the quarter-final at the Aviva Stadium, playing the full 100 minutes.

Kendellen, who turned 21 in March, joined the Academy straight out of school in the summer of 2020 having led PBC to the Clayton Hotels Munster Schools Senior Cup final that year.

He captained the Ireland U20s for the 2021 Six Nations and was a standout performer as they finished third, scoring six tries in five appearances.

Kendellen made his Champions Cup debut against Castres at the age of 20 in December 2021 and scored his first try against Ulster in January 2022.

He signed a two-year contract in January 2022 to move up to the senior squad from the Academy this summer.

Referee of the Year – Barrie O’Connell
Barrie started his refereeing with the Leinster Branch in 2005 and transferred to the Munster Association of Referees in 2007 on his return to Cork.  He is a member of Cork Con and UCC RFC.

He was appointed to the AIL National Referee Panel in 2007 and has refereed over 130 AIL games across all divisions during this period, in addition to holding Assistant Referee positions in the Champions Cup, Challenge Cup, PRO12/14 and Club internationals.

In 2021/22, Barrie refereed the first ever Women’s Interprovincial live on TV between Connacht and Leinster, was involved in the Munster Senior and Junior Schools Cups, acted as 5th Official for the Ireland v Wales Six Nations match and 10 AIL matches.

A highlight of the year was his taking charge of the Bank of Ireland Munster Senior Challenge Cup final between Garryowen and Young Munster in Thomond Park.

Senior Club of the Year – Young Munster RFC
A unique season began with the capturing of the first of two Bank of Ireland Munster Senior Challenge Cups. In late August, the Covid delayed 2020-21 Senior Challenge Cup was concluded with victory over arch rivals Shannon RFC.

Beginning the defence of their title a mere two weeks later against Cork Constitution FC, they ultimately retained the trophy by defeating Garryowen FC at Thomond Park in March. A ninth Munster Junior Cup crown was also captured with a comprehensive campaign that concluded by defeating Thomond RFC in the final.

Junior Club of the Year – Newcastle West RFC
Formed in 1924, Newcastle West RFC has played in Division 1 of the Munster Junior League since gaining promotion in 2011/12.  Since then, they have been one of the most consistent sides in the competition, finishing second on three separate occasions.

This season, despite losing their opening league game to Thomond, they recovered to win the next ten in a row to take the league title by a single point.

In the Munster Junior Clubs Challenge Cup, they opened their campaign with a win against Thomond before going on to the lift the trophy after a victory over Clanwilliam FC at Musgrave Park.

TJ Relihan (prop) and Shane Airey (out half/fullback) were also members of the Interprovincial championship winning Munster Juniors side.

A tightly contested Limerick City Cup win in December over Ardscoil Rís by 13-10 set them up nicely for the post-Christmas phase. Victory over PBC in the top 4 play-offs gave them a home semi-final where they would meet Bandon Grammar. One of the games of the season saw them edge out Bandon with an injury time win through their impressive number eight, Ruadhán Quinn.

Ruadhán, along with captain Conall Henchy, would go to claim representative honours with Ireland U19s. The Senior Cup final saw them take on PBC of Cork in Thomond Park. A comprehensive win for Crescent, played with considerable style, saw the title return to the Limerick school by a score line of 26-5.

Crescent have shown competitive balance across their full rugby programme, contesting the semi-finals of the Bowen Shield and Junior Cup along with the final of the McCarthy Cup.  However, the superbly coached senior team who concluded the perfect season with the Senior Cup success give them the edge in this year’s contest for Munster School of the Year.

Club Youth Section of the Year – Dungarvan RFC
Dungarvan RFC epitomise all that is good about youth rugby in Munster. They put a huge effort into increasing their playing numbers and continue to compete across both regional and provincial competitions.

This summer they will once again be a host venue for the Bank of Ireland Summer Camps helping to grow the numbers in the eastern region of the province.

Dungarvan RFC continue to demonstrate huge commitment to their coaches and players and are the embodiment of the values and ethos that are core to the Munster Rugby family.

Club Mini Section Of The Year – Old Crescent RFC
The Old Crescent RFC mini section has grown considerably in the last few years to 300 players. Fielding at all levels from U6 through U12, the player numbers include 60 girls at U8, U10 and U12 age groups since girls-only teams were introduced in the 2019/20 season.

The Club works closely with local primary schools and provide introduction to rugby and coaching to them through the Munster Rugby CCRO program.  They also host an annual Bank of Ireland Munster Rugby Summer Camp, and this year also hosted the highly successful Aviva Minis, as well as being strong advocates of the IRFU ‘Give It A Try’ initiative.

With a strong focus on building relationships between the senior and junior sections of Old Crescent, which includes getting senior players involved in training with underage teams, they have also introduced a mini blitz for boys and girls as a warm-up to AIL matches so that all can participate on match days.

As the club moves towards its 75th anniversary year they can look forward to continued strong growth and participation of its age-grade section.