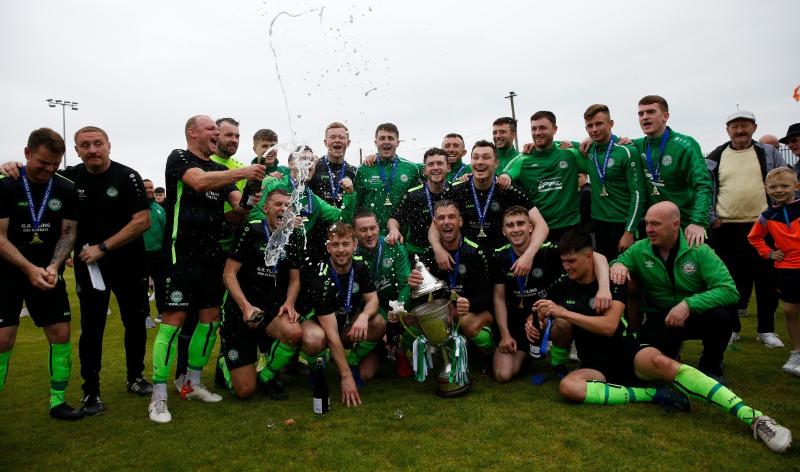 ALL roads led to The Fairgreen on this Sunday morning as the play-off to decide the destination of this season's Fan Mullaly Memorial Trophy Premier League title was on the line as Fairview Rangers faced Pike Rovers.

With both Pike and Fairview winning their respective final round games on last Thursday giving them 50 points each, it was the 'View who won the toss to host his premier play off.

A very big attendance took in this game which at times was enthralling. This epic 90-minute league play-off saw Limerick's two best sides produce a 'cat and mouse' affair.

As one would expect with two well-matched outfits, the opening 15minutes were tentative with little or no openings created.

However, things changed in the 18th minute when a speculative ball into the area from Colin Daly was handled by a Pike player just inside the area and match official Andy Hall pointed to the penalty spot. From the penalty kick, Stephen Bradley drilled the ball past Gary Neville to open the scoring, 1-0.

Ten minutes later at the opposite end, Pike Rovers' Eoin Hanrahan jinked his way down the touch line, evading a few would-be tacklesn and from just outside the area saw his fiercely struck effort skimmed the angle of the woodwork.

The 'View went close to doubling their lead on the 34th minute when Conor Coughlan whipped-in corner saw the in-running Mark Slattery drive his first time effort just over.

Five minutes prior to the break, Pike’s full-back Wayne O'Donavan saw his pinpoint corner find Eoin Hanrahan and his bullet-like header flashed just wide to leave Fairview with a slender 1-0 lead at the break.

At the start of the second half, John Mullane replaced the injured Jeffery Judge for Fairview

From the restart, Pike seemed to start quickly with Colin Daly, Stephen McGann and Eoin Hanrahan all on the front foot and this saw the 'View having to defend with the impressive A.J. O'Connor keeping close tabs on the Pike front runners.

At this, the Pike back three of Adam Lipper, Wayne O'Donavan and the highly impressive Pat Mullins were pushing on so much so that most of the play was now played in the 'View’s half of the pitch.

Just on the hour mark, Colin Daly with the deftest of touches picked out Eoin Hanrahan who ghosted by his marker and from the angle of the area saw his well-struck effort just fly over the top.

Pike were now well on top and attacking at every chance they got. In the 72nd minute Fairview’s netminder Aaron Savage excelled as a Stephen McGann effort seemed destined for the corner of the net, but a truly brilliant saw kept it at one nil.

When the Hoops now going for the all-important goal, they pressed the 'View back with Savage in goal being the busier of both net minders throughout most of the game.

With seven minutes remaining Pike Rovers won a free 40 yards from goal as yet again Wayne O'Donovan’s delivery carried to the back post. The ball was only half cleared by the back peddling defenders before Pike player-manager Robbie Williams, from close range, headed the ball to the net for the equalising goal.

This goal really knocked back Fairview, but most supporters in the Green were now expecting penalties. However, there was to be one final twist in this epic game when, in the 92nd minute, Pike were awarded a free on the right about 25yards out.

Pike pushed all the players for one final assault, but Eoin Hanrahan hit a beauty that evaded all and flashed to the bottom corner giving the netminder no chance.

To his credit, Hanrahan saw the slightest of gaps and his finish was of the highest quality, as this late late strike gave Pike their 8th Fran Mullaly Premier League win as it was in 2013/14 the last time the trophy went to Crossagalla.

On the day, both sides gave it their all and it was a thrilling finish to this season's L.D.L. Premier League as the winners had stars all over the pitch with Adam Lipper, Colin Daly and Robbie Williams doing well. However, it was the excellent Pat Mullins who was awarded the Man Of The Match award, shading it from his opposite dnumber for the View in A.J. O'Connor.

Both these two sides will meet again this Thursday in Jackman Park in the Lawson Cup final. Kick Off 7pm.