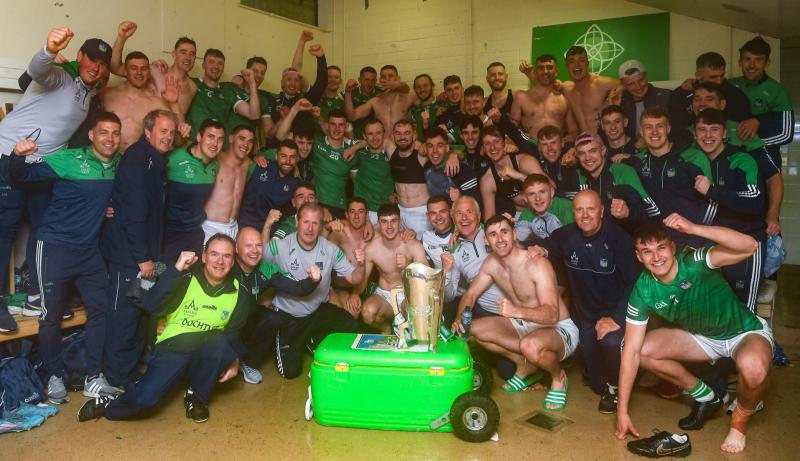 RESILIENT Limerick made it four Munster senior hurling titles in a row with a nail-biting 1-29 to 0-29 extra-time victory over Clare at a wet FBD Semple Stadium on Sunday.

It is the first time since 1936 that Limerick has achieved the feat of four senior provincial titles in a row. Limerick also become the first winners of the Mick Mackey Cup.

Gearoid Hegarty’s goal in the 27th minute proved to be the difference as John Kiely’s men marched into the All-Ireland semi-final against either Galway, Antrim, or Cork on Sunday, July 3.

A Declan Hannon point in injury time looked like it had won the game for John Kiely’s men in time added on, but a terrific Tony Kelly sideline – with the last puck of normal time- brought the game to extra time.

However, resilient Limerick held their nerve and extended their lead to three points in extra-time.

After being level a total of seven times in the opening 35 minutes, both sides went into half time on level terms at 1-11 and 0-14 apiece with Limerick’s goal coming through Gearoid Hegarty in the 27th minute.

The sides were level on no fewer than 12 separate occasions.

In what was the first Munster final meeting between the neighbouring counties in 27 years, Clare started the brightest and were three points to the good inside the opening seven minutes thanks to a Tony Kelly free, a Peter Duggan side-line, and a Ryan Taylor point from play.

However, Aaron Gillane pulled one back for Limerick in the eighth minute to stop the rot with the Treaty men’s first score of the afternoon – a well taken free from just outside the 45-metre line.

It took nine minutes for Limerick to get their opening goal from play when Seamus Flanagan slotted over the swing the momentum in John Kiely’s men’s favour.

When Tom Morrissey pointed from out wide with 12 minutes on the clock, Limerick were level. Less than a minute later Flanagan scored his second point of the afternoon to put Limerick ahead for the first time.

Both sides were level on three more occasions before Clare opened up a two-point advantage mid-way through the opening half.

A superb David Fitzgerald effort from the half-time line had put Clare two points ahead in the 20th minute.

An excellent save from Eibhear Quilligan denied a certain Flanagan goal in the 22nd minute after Gearoid Hegarty superbly won the ball back for Limerick.

Brian Lohan’s charges extended their lead to three with 10 minutes to go before half time, before Hegarty – put through by Tom Morrissey – raised the green flag with a superb goal after flicking the ball over Diarmuid Ryan before finding the corner of the net three minutes shy of the half hour mark.

Both sides were level two more times before the half time break.

After the restart, both sides exchanged points and were level four more times before a 53rd score from Darragh O’Donovan point put Limerick a point up again.

With 12 minutes to go Seamus Flanagan slotted over to put Limerick ahead by more than one point for the first time – 1-17 to 0-18 in favour of his side.

However, two quick-fire scores from Tony Kelly and substitute Shane Meehan had Clare on level terms by the hour mark.

Points from Gillane (2) and Flanagan put Limerick ahead again  before two Peter Duggan frees had Clare level for the 12th time with just two minutes on the clock.

And just as Declan Hannon looked like he had won the game for Limerick, a superb Tony Kelly side line level scores at 1-21 to 0-24 and brought the game to extra time.

Limerick held the lead in the remaining minutes of extra time with Will O’Donoghue slotting over in the last minute to put Limerick four points ahead, before Mark Rodgers narrowed the deficit to three.

Limerick have now won their 23rd Munster title and their fourth in as many years as it finished, Limerick 1-29 Clare 0-29.