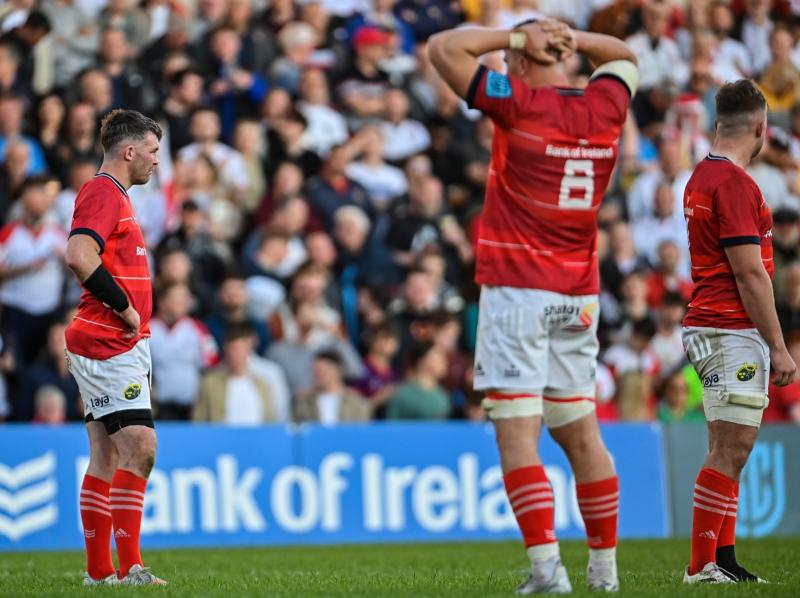 Munster contributed to their own downfall in Belfast with a string of unforced errors helping to decide the interprovincial fixture decisively in the home side's favour.

This result means Munster have now lost all eight of their away play-off games in the URC/Pro14/Pro12.

The defeat brings an end to Johann van Graan's tenure as head coach as he departs for Bath next season. Senior coach Stephen Larkham is also leaving the Munster backroom team with the former Wallaby returning to a role with the Brumbies.

Munster's long wait for a trophy will now extend to a 12th season following this lacklustre display in Belfast.

Ulster outscored the visitors five tries to three to secure a comfortable victory over outclassed opponents. It was an especially frustrating night for the Munster supporters who had travelled up to Belfast for the game as a serious traffic accident on the M50 northbound caused lengthy delays and resulted in some Munster supporters taking up to five and a half hours to reach the match venue.

Munster trailed by 12 points at half-time, 7-19, following a 40 minutes in which the visitors undid some impressive play with a string of unforced errors.

Ulster hit the front in the ninth minute, when John Cooney dotted done following an opportunist quick tap penalty and pin-point pass from James Hume. A number of players from both sides were involved in an altercation as centre Hume took the quick tap.

To their credit, Munster hit back when, following a series of excellent carries from the likes of Chris Farrell and Niall Scannell, impressive number eight Gavin Coombes powered to the try-line before being stopped short. The quick-thinking Jean Kleyn then gathered possession to dot down.

The second quarter was a frustrating period for Munster who threatened to add to their points tally on a number of occasions, but a combination of several mistakes and an excellent cover tackle from Rob Baloucoune to prevent Joey Carbery from getting a certain try-scoring pass away, hampered their progress.

At the other end of the pitch, centre James Hume sent Baloucoune through a gap in midfield as Munster's defence was caught narrow, before Ethan McIlroy put full-back Stewart Moore over to score a terrific try. Cooney's conversion made it 14-7.

Ulster added a third try before half-time, awarded to Moore by referee Peyper, after consulting with the TMO. The conversion was missed.

Munster thought they had given themselves a lifeline when Gavin Coombes looked to have dotted down three minutes later after blocking down Cooney's attempted clearance. However, the try was chalked off after the officials deemed their had been the slightest bit of separation between arm and ball.

A smashing finish from winger Keith Earls in the 54th minute provided a rare bright spark for Munster who closed the gap to 17 points with that second try, 12-29.

However, Ulster hit back with their fifth try of the game through James Hume, before Earls completed his brace of touchdowns.