Opinion: Sunday's Munster final will be one for the ages - Shane Dowling 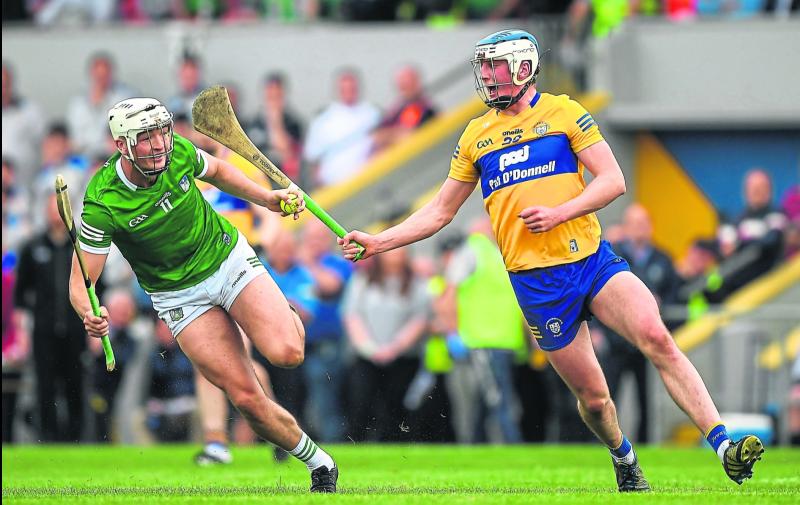 Limerick's Kyle Hayes is closed down by Diarmuid Ryan, of Clare, during the Munster senior hurling championship round robin fixture at Cusack Park, Ennis last month

I WOULD love to try divulge into an experience of previous times where I have played Clare in a Munster final and give a feeling of what it was like, but that’s not possible.

Limerick have not played Clare in a Munster final since 1996. It's mad really when you think of it how there hasn’t been more encounters, but there you go.

The biggest game in recent years was the 2013 All-Ireland semi-final and I think its best forget about that! I have to say though, if there is one team I hate losing to, it's Clare.

I think the reason why is because I am right on the border as are a lot of lads. The rivalry is always there.

I remember, back in 2018, Clare played Galway in the All-Ireland semi-final on the Saturday, and we played Cork on the Sunday. I was roaring at the TV hoping for a Galway win. When that game finished in a draw and we won on the Sunday, the following week we were in Johnstown House at a training camp. We finished our business on Sunday morning, John Kiely and Paul Kinnerk hit for Thurles to watch the replay and we all watched the game in a private room in the hotel.

I could have taken losing to Galway in a final, no problem, but the fear of losing to Clare was unbearable, and not worth thinking about.

After the game Caroline Currid made her way over to me, and I just said, ‘Caroline, you better be glad Galway won because you would have been full-time with me for the next week if Clare had won’.

She just started laughing and off we went. It’s a Limerick-Clare thing. Unless you are from either place you won't get it.
Lads have hurled with and against each other for years, schools, colleges, clubs. There is a great respect among both, but a savage rivalry.

I have no doubt over the last number of years it would kill the Clare folk to see the success that Limerick are having and I have no doubt it would be the same if they shoe was on the other foot.

When Clare meet up on Sunday morning, they will come to Thurles with a mission. Last year's misfortunes, with James Owens' awarding that penalty against Tipp, barely losing out to All-Ireland finalists Cork, and then Limerick's success, mix that all together and they will be frothing at the mouth for this.

We all hear about the process now and game plans, etc, but don’t forget there is always room for emotion. It can't be 100% emotion, but it can't be 100% process either. I think you will see serious emotion from both sides on Sunday.

Yes, limerick have won the last three Munster finals, but I can guarantee you something, when they take to the field on Sunday, it will be like they have none. There is no way they will want Clare getting one up on them.

In terms of the game though, it is a hard one to predict, really. Limerick are 1/5 with the bookmakers, and Clare are 4/1. Whoever was pricing up the game last weekend surely spent too much time in the sunshine, as I think that is bonkers.

The prices are surely based on Limerick over the last few years. The sides have played twice this year and have drawn twice. Yes, both in Ennis, but Clare finished top of Munster.

Now I hope the game plays out the way it is priced, but I highly doubt it. Clare have been flying this year. They destroyed Tipp, Cork and Waterford and drew with Limerick. They have a great mix to the game, look extremely hungry and have all their players playing to their potential, something they haven’t been doing for the last few years.

I thought, at stages, they had Limerick in trouble the last day and its hard to know who will have learned more.

Obviously Limerick have gained huge experience over the last number of years and I just think when the game comes into the melting pot and the rough and tumble of it, that should tell.

You would expect to see Aaron Gillane back in on the edge of the square this weekend and Cathal O'Neill to go back to number 11. Moving Kyle Hayes back to the forwards hasn’t really worked to date, and would it be mad to move him back to number seven?

Personally, I would go with it. It would throw a cat amongst the pigeons, and he offers so much there. I know it's far from ideal to be moving a player here, there and everywhere but does it really matter as much anymore? Either way, it's not a move I would be afraid to make at some stage if required.

It's been mad for people trying to get tickets and I just hope that everybody gets sorted. The atmosphere should be class on Sunday afternoon, and the pre-match buzz around the Thurles square will be back to what we all know it is.

The Town end will be full of green and white, with a few flares thrown into the mix. This will be a Munster final for the ages. This is Limerick v Clare. This is rivalry!