Bumper spell for Limerick racing connections on the track 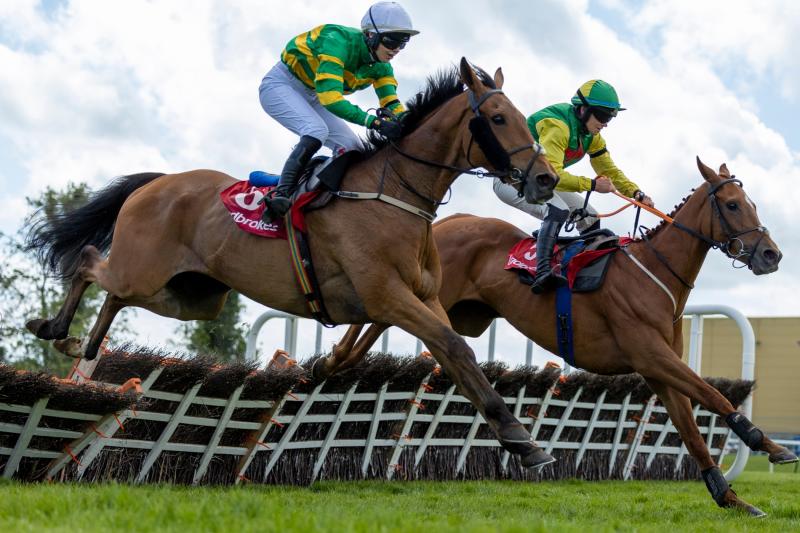 BALLINGARRY jockey Billy Lee added to his fantastic Guineas weekend success at the Curragh when recording a treble at Roscommon on Monday evening last.

He made a winning start to the meeting when the Michael Grassick-trained Brown Eagle took the claiming maiden at odds of 15/2. The Joe Keeling-owned and bred three-year-old made all the running to score by three-parts of a length from the Ger Lyons-trained 8/13 favourite Plankton.

The Paddy Twomey-trained Spasiba scored a comfortable two and a half-length success in the 10-furlong maiden in the trainer’s own colours. A 7/4 favourite, she raced clear early inside the final furlong to win by four and a quarter lengths from Gavin Cromwell’s Pachmena. The treble came Lee’s way as 6/5 favourite Rosscarbery, another trained by Twomey, recorded a two and three-parts of a length win in the 10-furlong fillies’ handicap, another winner for owner Robert Moran.

Conor McNamara rode his first winner for trainer Henry de Bromhead at Punchestown on Tuesday where he took the two-mile maiden hurdle on the John Battersby Racing Syndicate-owned Frontline Worker. A 7/2 chance, the five-year-old led at the second last hurdle and raced to a three and a quarter-length win over the Nigel Slevin-trained Diamondinthemud.

Seamus Braddish gave JJ Slevin the first of two winners at Wexford on Wednesday when saddling Good Bye Milan to win the opening division of the two-mile one-furlong handicap hurdle. The 25/1 shot, owned and bred by the trainer’s son James, got on top late on to beat the Colm Murphy-trained Gondor by half a length.

Enda Bolger maintained his fine recent strike-rate as the Luke Dempsey-ridden Mica Malpic won the two-mile six-furlong handicap chase at Limerick on Friday evening. In the JP McManus colours, the 100/30 favourite headed Bitview Colin before the final fence to win by three lengths. It was the trainer’s fourth success of the new season.

The McManus colours were in the winners’ enclosure at Punchestown on Sunday where Curragh trainer Padraig Roche gain his second success of the week as Marshalled scored a narrow success in the ladies’ handicap hurdle. Aine O'Connor was on board the 7/2 chance which was headed by the Gavin Cromwell-trained 5/2 favourite Shantou Lucky but fought back to win by three-parts of a length.