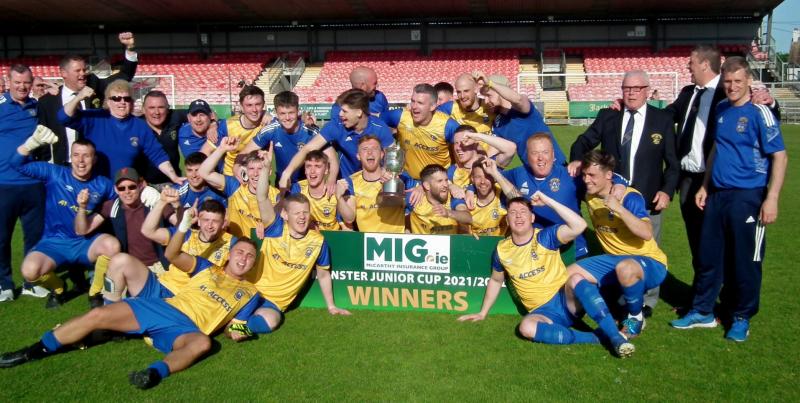 Fairview Rgs 3 St Michaels 0
FAIRVIEW Rgs picked the perfect occasion to turn in one of their best performances of the season to beat St Michaels 3-0 to capture the Munster Junior Cup at Turners Cross on Saturday evening.

The mighty Saints had no answer to Fairview on this occasion as the Blues picked up their eighth provincial title and first in 13 years and they did it in style with scores from Conor Coughlan, Darragh Rainsford and Jeffery Judge.

Right from the kick off Fairview were on the front foot playing some scintillating football. They carried a one goal lead in at the break but if they had converted their chances, they would have wrapped the game up by half time.

That said, a team with the quality of St Michaels will always create chances and but for a stunning goal line clearance by Mark Slattery when the game was scoreless, we may well have had a different game.

The Tipperary side were forced to field without the mercurial Jimmy Carr and they missed his menace up front. They never gave up the fight but, on the day, had to yield to the Limerick side.

In the opening minutes Coughlan played a ball into the box and Rainsford ran across Adrian Walsh’s eyeline but the keeper kept his attention to save.

The Tipperary side had a great chance to take the lead when Ed O’Dwyer cut in on the right and let fly from an acute angle.

Savage parried only as far as David Slattery who looked like he must score but for an unbelievable block by Slattery. Even then the danger was not gone as the ball fell to John O’Brien but on this occasion, it was Jamie Enright who got in the way to keep the game scoreless.

Quirke was presented with two great chances to open the scoring but failed to find the target but Fairview were not to be denied. Coughlan won a header in the middle to send Rainsford away on the left who played a first-time ball across goal where the inrunning Coughlan applied the finish following some deft footwork.

After the break Slattery went close with a header that was inches over the top before Saints took a grip on the game for a period. O’Brien delivered into the area for the inrunning Ryan but a slight nudge by O’Connor forced the ball wide.

Adam McGrath went within a millimeter of equalizing when his 30 yard effort smacked off the crossbar. The rebound fell to Mulcahy whose volley from 18 yards produced a stunning full length save by Savage.

A goalmouth melee saw O’Connor, Slattery and Kirwin get in the way of efforts from Mulcahy and Ryan as Saints ratcheted up the pressure.

However, another a good break down the left ended with Judge threading a pass into the path of Rainsford who calmly slotted home to ease the pressure.

With the opposition reeling, Fairview struck again. Coughlan picked up outside his own penalty box and a super run saw him skip and weave past a number of challenges before teeing up the supporting Judge to fire home and end any doubts.

Fairview Rgs: Aaron Savage; A clean sheet for the rock-solid Savage. A stunning save to keep Fairview in front in the second half highlighted his worth.
Jamie Enright; The veteran defender may have added a few years but has lost none of his pace which makes him a nightmare to play against. In the right place time after time.
Martin Deady; Much of Fairview's attacking play originated from his left back berth. Classy full back turned in another classy performance.
Mark Slattery; An unbelievable goal saving block in the first half was just one of a number of vital interceptions. His reading of the game is uncanny.  Superb.
AJ O'Connor; Another performance to add to an already enviable reputation. A tower of strength, the captain led by example.
Steven Bradley; Rock solid all evening with some crucial interceptions. An early booking did not throw him off his game, making life easier for his back four.
Jeffery Judge; Winner of the Man of the match award. Was a pain in the rear to the opposition all evening and capped a superb performance with a super goal.
Shane Duggan; While all around him were hectic, the Fairview maestro was calmness personified always putting his side on the front foot.
Russell Quirke; On another day could have bagged a hat trick. While the bounce of the ball did not always go his way, he was always turning up in the right position and kept his former team mates on edge.
Conor Coughlan; What a day to turn in your best of the season! Tormented and terrorised Saints all through the game. Got his reward with the opener and a brilliant run created the opening for the third goal - Excellent.
Darragh Rainsford; His balance and poise matched by his pace ensured the Saints defence could not relax for a second. Got the vital second goal in a fine performance.
Subs; Scott Kirwin; Slotted in for the injured Enright and his no nonsense defence was the perfect fit for that stage of the game;
James Fitzgerald, John Mullane, AJ Moloney, Paul Danaher; All sent on with given roles and played their part to perfection.