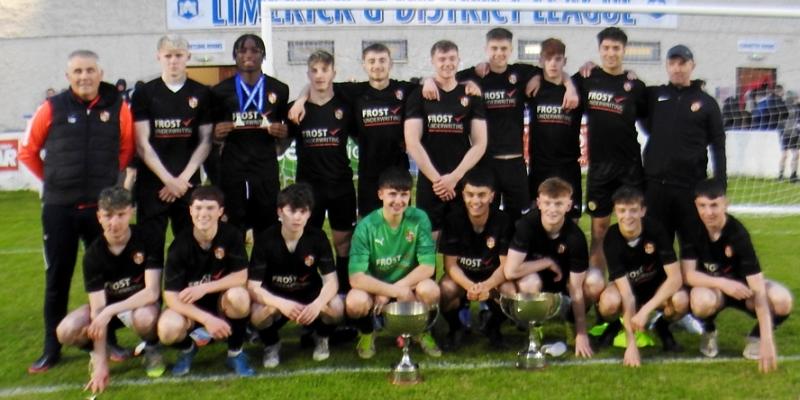 AISLING Annacotty added the Boland Cup to their trophy cabinet when they beat arch-rivals Fairview Rgs in Jackman Park on Tuesday evening.

The sides finished 1-1 after extra time and it needed a penalty shoot-out to separate the sides when Aisling keeper Max Stone came up trumps with a couple of good saves to see his side to victory.

Fairview had finished second to Aisling in the League, but defeated them in the Ger Ryan Cup final. Despite putting up a fine performance in their latest meeting, Fairview came up just short in the Boland Cup decider.

The winners started in flowing form and looked like they would ease to victory. Mike Curran’s early goal added to that belief.

However, Fairview slowly worked their way back into the tie and levelled through Cian Specht before the break.

The second half ebbed and flowed with both sides giving their all but could not find a breakthrough.

Aisling took the lead when Mike Curran pounced on a rare defensive slip to race through and fire past Fairview keeper Eugene Hurley.

Aisling levelled twenty minutes later when a superb run down the right ended with Marcus Hogan crossing to the front post where Cian Specht stooped ahead of his marker to glance a header to the back of the net.

Aisling went close after the restart when Mellerick headed inches wide and at the other end Marcus Hogan went close with a shot inside the box.

With time running out in normal time Aisling had a chance to snatch it when the ball fell to Ronan Greaney in the area but his shot was turned away to safety by Hurley.

Likewise, at the tail end of extra time Fairview had an opening when Hogan delivered a good cross to the back post but Mark Ward was unable to rise high enough to put the finishing touch.

The penalty shoot out pitted two sets of tired players against each other and that’s when Max Stone stepped up to do his part, saving twice.