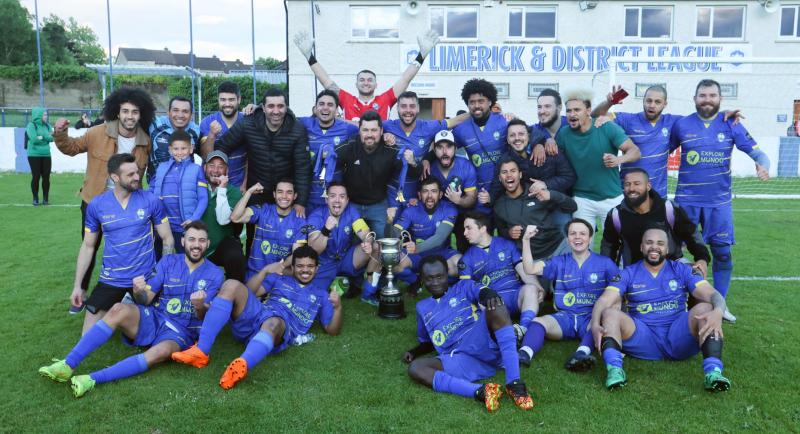 SAMBA soccer arrived in Jackman Park on Monday evening when Brazuca United captured the Power Cup in a thrilling 2-1 win over Mungret Regional.

The Brazilian side brought colour and flair to the venue and their vociferous fans added hugely to a great atmosphere.

First half goals by Murilio Carvalho and Samuel Asante proved decisive for the winners, but they had to rely on their goalkeeper Guilherme Teixeira to secure the victory with a string of superb saves.

In front of him, Madalin Rotarescu, Renator Wattenberg, Felipe Rodrigues and Rodrigo Versiani had fine outings.

Mungret, by their own admission, have one of the oldest squads in the league (including Tony McNamara heading for 67!), but they showed they were still able to raise their game for the occasion.

Felipe Rodrigues and Rob Doyle both had early chances for their respective sides, but both fired over before Brazuca took the lead.

A superb overlapping run by Rotarescu saw him pick out Carvalho on the edge of the box and a sublime touch created and opening to fire a low shot from 20 yards to the back of the net.

A super save by Teixeira denied Danny Galvin an equaliser from ten yards and seconds later the keeper was in action again bravely saving at the feet of Doyle.

Brazuca doubled their lead when Wattenberg broke clear on the left and delivered an inch perfect pass for the inrunning Asante to finish from close range.

The second half saw Mungret trying to fight their way back into the game and a Des O’Donoghue volley flew inches over before Doyle was denied by another point blank save from Teixeira.

They got some hope with a couple of minutes remaining when Brian Aherne reduced the deficit from a penalty kick.

Mungret peppered the Brazuca goal in the final minutes and looked like they would take the game to extra time when the ball dropped in a crowded goalmouth. Finucane’s shot was blocked into the path of Galvin but his shot produced a stunning save from Teixeira and even then the rebound fell to Garry Long but the keeper recovered to make one final save to secure Brazuca’s win.