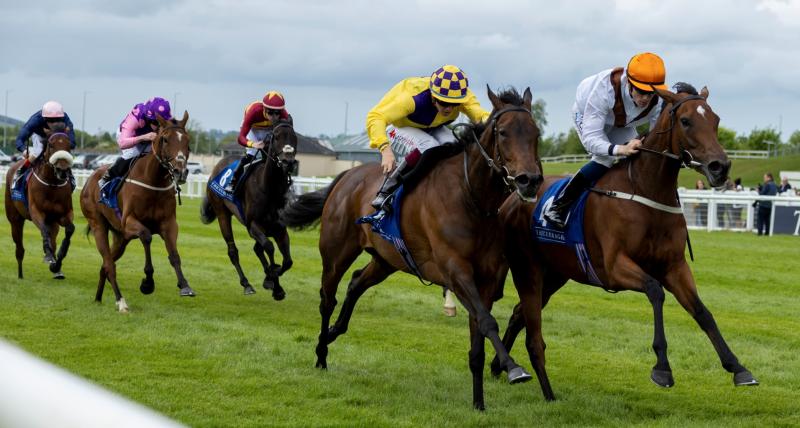 BRUREE-BASED trainer Enda Bolger and amateur rider Aine O'Connor combined to win the hunters’ chase with the JP McManus-owned Stand Up And Fight at Killarney.

A welcome winner on the card for favourite backers on Monday last, the 7/4 chance made virtually all the running and was nicely clear between the final two fences as he beat James Motherway’s Na Trachtalai Abu by 11 lengths.

Ballingarry jockey Billy Lee dominated from a jockeys point of view at Killarney on Tuesday where he rode a treble.

He shared back-to-back winners with Curragh trainer Willie McCreery, taking the three-runner median auction fillies’ maiden with 1/4 favourite Cigama which had to battle for a three-parts of a length win over Jessica Harrington’s Alizarine while All Lies Ahead was a one and a quarter-length winner of the older horses’ maiden over the same distance, the 3/1 chance beating Ger O’Leary’s 9/4 favourite True Grit in a more convincing fashion.

The treble was completed with another convincing winner as the Paddy Twomey-trained Beamish took the concluding 14-furlong conditions’ race by two lengths from the Joseph O'Brien-trained Ebendi. It was a very taking victory for the 4/1 chance which was in action for the first time since winning his maiden at Leopardstown in June of last year.

Although 4/9 favourite Relevant Range was turned over in the opening maiden, Billy Lee and Paddy Twomey were winners again at Cork on Wednesday where 10/1 chance Open Market landed the five-furlong median sires series maiden on her first start.

A first winner for Twomey for owners Newtown Anner Stud Farm, the two-year-old led a halfway and had plenty in hand as she beat the Ger Lyons-trained Midnight Toker by three-parts of a length.

It proved to be a big weekend for Lee and Twomey at the Curragh and the pair were on the scoresheet very early on as Vellner won the 10-furlong maiden on Friday evening.

In the colours of owner Colin Lynskey, the 11/4 chance continues to improve and won by a length and a quarter from the Joseph O'Brien-trained World Famous. Lee landed a second success as he partnered the Michael Grassick-trained Verhoyen to a runaway success in the seven-furlong handicap.

Successful on the Saturday card of last year’s Guineas festival, the 17/2 chance made every yard of the running and raced clear inside the final furlong to win by all of six and a half-lengths from Edward Lynam’s pair Heavenly Power and Punk Poet. the jockey has ridden the seven-year-old to four of his five career wins.

Billy Lee and Paddy Twomey shared another notable success as Pearls Galore justified her favourite’s tag in the Group 2 Lanwades Stud Stakes at the Curragh on Sunday. A very warm order 8/11 favourite, the five-year-old was always in control and readily held off the late lunge of the Joseph O'Brien-trained Emphatic Answer by a neck.

Twomey said, “She’s won her Group 2 now so we’ll have to try and win a Group 1. We’ll be looking at all the top fillies’ races for her.”