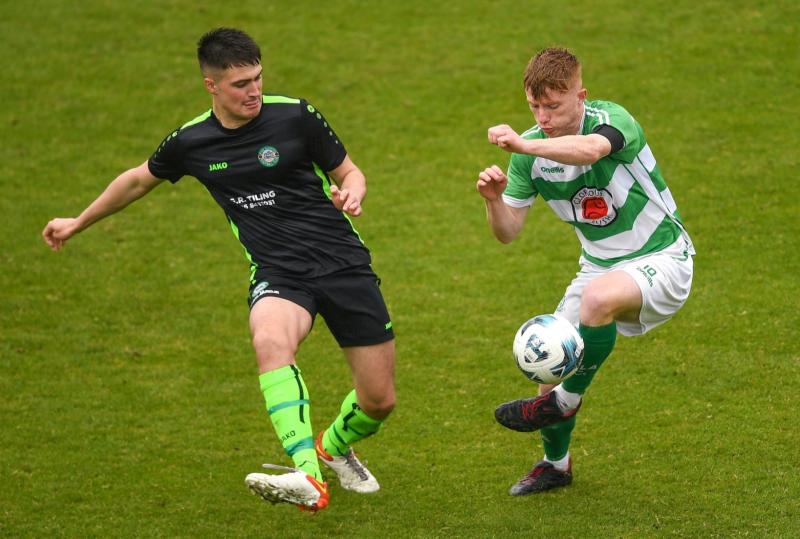 It was Pike’s third successive defeat in the decider having suffered defeat in the 2016 final to Sheriff YC, before losing the 2018 decider to North End United after a penalty shoot-out.

The memory of those defeats obviously weighed heavily on the Limerick side who looked tentative in the opening half and rarely delivered the performances they are capable of.

In contrast the Waterford side looked much happier on the ball and while neither side created too much in the opening half, Villa had more of a pep in their step.

Aaron O'Connor, in the middle of the park, was rightly called as Man of the Match as he proved a thorn in the Pike side throughout, breaking up play time and playing with no mean amount of skill. Dylan Walsh and Adam Heaslip also impressed at the heart of the winners' defence.

Villa obviously had their homework done as they succeeded in starving Pike's main threats Conor Layng and Steve McGann of any decent possession forcing the Pike duo out of position to seek the ball.

As the game progressed the duo came more into the game but they rarely had enough time on the ball to trouble their opponents. The effort of the Limerick side was plain to see, led by player manager Robbie Williams and young centre back Adam Lipper, but it was just one of those days where nothing seemed to stick and you got a bad feeling early regarding the outcome of the tie.

Unfortunately, that fear came to pass and a couple of red cards for Pike in the final meeting did little to ease the disappointment for Robbie Williams' men.

Villa gave notice with two minutes of the threat they posed when James Kennedy put Luke Walsh away on the right and his shot from an acute angle forced Gary Neville into a fine save.

As stated clear cut chances were at a premium and the next time either goal was threatened was a long range effort by O'Connor that flew narrowly over the top.

Just before the break Pike tested the Villa goal for the first time when he was fired a superb free kick that struck the crossbar on the way to safety.

Shortly after the restart Villa's John Fredrick Tamen twice raised alarm in the Pike defence but his final efforts were off target.
However, midway through the half, a good move saw Eoghan Ryan pick out Dean Walsh whom played a teasing ball across the face of the Pike goal where Kilgannon arrived on cue to tap in at the back post.

Pike introduced Kevin Barry and his power was causing Villa problems. A good knock back by the substitute fell to McGann but his goal bound volley was superbly blocked by Walsh.

Another long-range effort by McGann was smartly gathered by Dunphy and although the keeper looked less assured dealing with Danny O'Neill' cross, he did enough to knock it to safety.

Another chance for McGann looked like it would level the tie but a super block by Adam Heaslip.

Pike threw caution to the wind in the final minutes and a Conor Layng header and a Colm Walsh O'Loughlin shot were close but not close enough.

With frustration getting the better guile Pike lost Evan Patterson and Walsh O'Loughlin to red cards in the final minute and with it their hope of the title.

It’s a major disappointment for Pike, who came to Cork in celebratory mood following the wonderful success of their Under 12’s in the SFAI National Cup final on Saturday. However with much still to play for, a quick recovery can still salvage a positive end to the season.