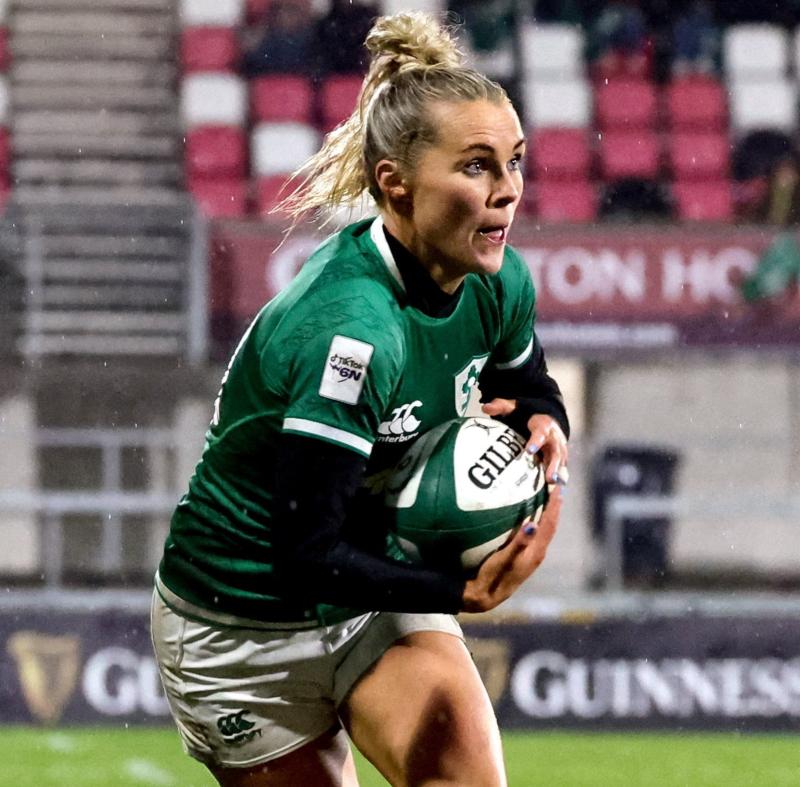 A LIMERICK woman has scooped one of the top accolades at tonight's Energia All-Ireland League rugby awards.

Twenty six-year-old Aoife Doyle, who currently plays with Railway Union, Munster and Ireland, has been awarded the Women’s Player of the Year accolade at the prestigious event.

Doyle was just 18 when she made her Ireland debut against France in the 2015 Six Nations, she also played 7s for several years and is now back playing XVs regularly.

Clareview woman Doyle has won 10 international caps for Ireland. The utility back started playing rugby with Shannon RFC underage and was still a Shannon player when she won her 6 Nations medal with Ireland.

The Limerick woman was capped by Munster at U18, U19 and Senior levels. She also represented Ireland at U18 level.

Aoife Doyle’s first taste of sport was playing camogie with her local GAA club Na Piarsaigh as a four-year-old. She did not take up rugby until some years later.

She is a past pupil of Salesian Primary School and Laurel Hill Secondary School.

The awards were voted for by the Head Coaches and Directors of Rugby across the league.

The Men’s Division 1A Player of the Year was won by Cormac Daly of Clontarf RFC, who starred with a hat-trick of tries in their bonus point victory over Dublin University. Daly also won Player of the Match in the Energia AIL Division 1A final.

This 2021/22 season, clubs have reported a 15% increase in attendance and the Energia AIL final on May 1 in the Aviva Stadium, more than doubled its crowd record at the venue.

Clubs from across Ireland were invited to nominate members or volunteers who go above and beyond the call of duty and Conall Fitzpatrick from Waterpark RFC, was awarded the Community Hero Award. The nominees for this award have provided years of service and have volunteered for the betterment of their club many times, at all levels and over a wide range of tasks on and off the pitch.

Nominations were sought from clubs around the island, with a huge quantity received. Seamus Lowry, Oughterard RFC, Richard Black, City of Armagh RFC, and Martina Fitzpatrick, Tallaght RFC were also shortlisted. The Moment of the Year and Community Hero awards were nominated by club members and supporters of the league.

The ceremony also included a 15-minute panel discussion with Niamh Briggs, Richie Murphy, and John Fogarty. The panellists discussed the 2021/22 Energia AIL season while reflecting on the efforts of the U20 and Women’s teams in this year’s Six Nations Championships. Each panellist also touched upon their respective individual experiences playing in the All Ireland League.

Managing Director at Energia, Gary Ryan said: "Congratulations to all the winners and a huge thank you for all of you who attended Old Wesley to celebrate the 2021/22 season through the first physical Energia AIL Awards as title sponsor. We have been blown away by the pure passion and support of the game this season and are delighted we could shine a light on the league’s 30-year legacy earlier this year too. We are looking forward to seeing all the players back on the field for what I’m sure will be another gripping Energia AIL season."

Commenting on the Energia AIL Awards, Des Kavanagh, President of the IRFU said: "On behalf of the IRFU, I would like to extend a mighty congratulations to the winner of each award, and my thanks to all who attended this evening and donated to the Irish Heart Foundation.

"Furthermore, my thanks to Energia for their support and promotion of the Energia All Ireland League as title sponsor. We look forward to continuing to work together over the coming years, and truly appreciate their efforts in delivering the Energia AIL Awards after a two-year Covid hiatus."

This year’s awards were presented by The Club Scene Podcast host, Limerick man Daragh Frawley, and celebrated the action both on and off the pitch and highlighted some of the real skill, talent, and incredible rugby we have seen from the players this season.