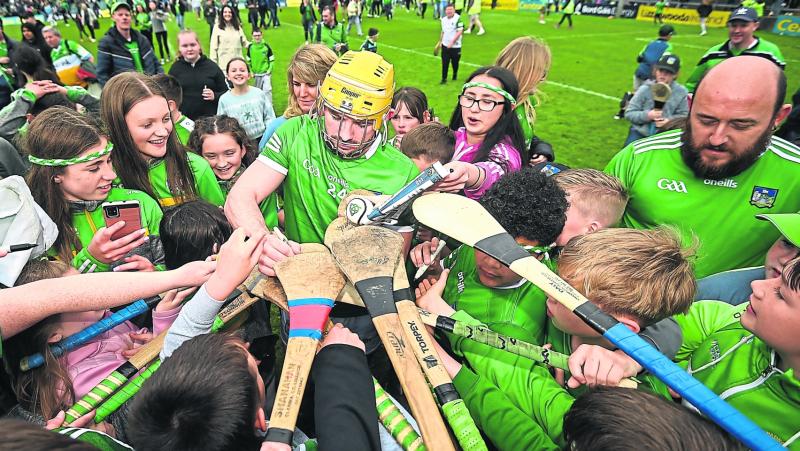 WHEN Kyle Hayes was bearing through on goal half way through the second half, and was met by three defenders and fired out over the endline as well as the sliothar, it was at that stage I said 'maybe it won't just happen for us today'.

I thought Davy Fitzgerald was spot on the Sunday Game that night also. He referenced how animated John Kiely and Paul Kinnerk were on the sideline against Waterford, and I can vouch for that.

They pucked every ball high up and low down. Internally, obviously they put a huge emphasis on that game. I also thought John Kiely was spot on in his post-match interview, stating that it is hard to have an upward trajectory throughout the course of the Munster championship and into the All-Ireland series.

What is also hard, for both players and management, is no matter where they turn all they were hearing was not a question would they win, but by how much. If you hear that, or see that enough times, it has to seep into your mentality, even if it is only slight.

I thought Limerick looked off on Sunday. They just looked lethargic and made decisions on field that they would rarely make.
Straight up - I couldn’t see anything but a comprehensive win last weekend.

After watching Limerick against Waterford, and after watching Tipperary v Clare, it didn’t exactly take a State pathologist to predict how the game should have gone.

But credit Tipperary, they fought on their backs. And I am a big, big believer in that. Fine, you may be in transition, you may be down key players, but that never-say-die attitude should always exist.

It's what Cork are lacking at the minute, or at least that’s how it looks, and I think that’s why everybody in their own county is so bewildered with things.

Tipp came to the TUS Gaelic Grounds not for a moral defeat, but to get two points. And by God, for 55 minutes, did it look that way. Ger Browne ran riot in the first half scoring three points from play but could have added two more.

Noel McGrath rolled back the years and gave an heroic display. In the first half, there was only two points in it, and both teams had missed a lot of chances, so Tipp could have been further in front, or indeed if Limerick took their chances they could have at least gone in level at half time.

Compare that to the Cork game, where Limerick had 2-5 scored from turnovers at half-time, and finished off with a total of 2-16.

Generally, even though it's rarely thankfully, when teams get a run on Limerick it is solely down to the energy levels being below normal, tackles being below normal, and teams are able to play the ball around and deliver good quality into the opposition full-forward line.

Tipp also had three really good goal opportunities, Nicky Quaid at his brilliant best as always standing tall and bringing off two great saves, while one trickled past the post, right when the game was in the melting pot!

In saying all that, I am a firm believer that it is a great sign when a team wins a game and were really below par.

Limerick won the game convincingly for a finish, but anyone that was at it, or saw it knows exactly that that indeed was not the case.

Sean Finn roared into the game after an uncharacteristic 45 minutes, as did Mike Casey and Barry Nash.

I think Declan Hannon is playing the best hurling I have seen, and really stood up with 20 minutes to go.

Hego' and Tom started to find their mojo, and when Conor Boylan came on, he made a big impact.

Throughout the game Gillane was somewhat quiet, but I would take that everyday of the week if he stayed fetching balls out of the sky and rattling the onion sack twice.

And no, it wasn’t a sending off. If he swung with both hands I would say yes, he released one hand and tried to flick the ball.
Of course I will be called biased but that’s my belief. In saying that, it's never wise to give the ref an opportunity to produce a cárta dearg.

So not all doom and gloom. We hit for the border on Sunday, knowing that bar the craziest of circumstances we are in a Munster final, and definitely qualified for the All-Ireland series.

I don’t buy this stupid talk over what team will John Kiely play. Limerick will be playing Clare, in a Munster championship game. Whoever represents the green and white will be doing so and giving everything to get a result in Ennis.

At the end of the day, do we want to give our neighbours an opportunity to grow even more confident?

Does anyone really think that we are going to take our foot even slightly off the pedal this Sunday? I think not!