Limerick racing enjoys bumper start to May on the track 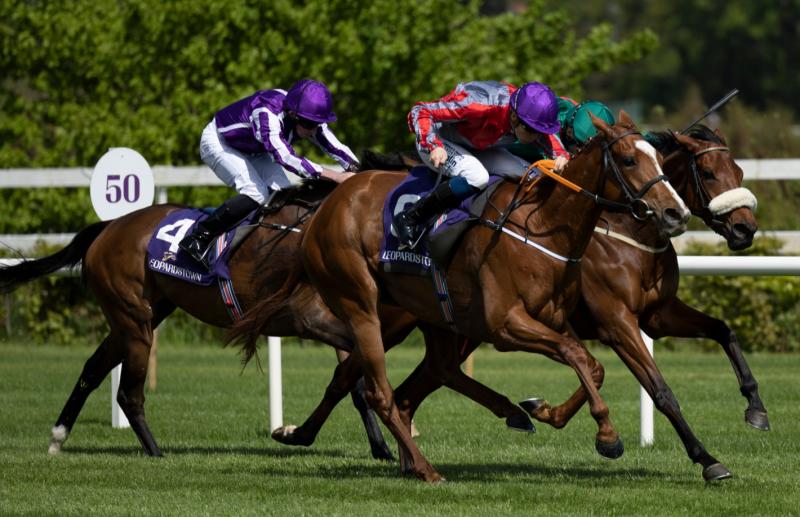 Already the winner of the Listed Plusvital Stakes at Naas and the Group 3 Alleged Stakes at the Curragh this season, the five-year-old stepped up again as he beat the Michael Halford-trained Bear Story by three-parts of a length.

Hayes replaced the injured Oisin Orr in the saddle and Meade said of his winner, “He’s not in the Group 1 Tattersalls Gold Cup but we’ll have to think about supplementing him for it now. He certainly deserves a place in it.”

The Enda Bolger-trained L’Impertinent showed his liking for Ballinrobe when winning the beginners’ chase at the County Mayo venue on Tuesday. Successful in a maiden hurdle at the track early last month, the six-year-old made all the running and was clear for much of the way under Simon Torrens to score by a length and a half from the Alice Curran-trained Jacksons Gold at odds of 13/2.

Bruree-based trainer Bolger said; “Here were a couple of better-class horses in the race today but jumping is his forte and after the first two fences he had the others under a bit of pressure.

"He goes as fast as he can and you just have to go with him. John Shinnick won on him here over hurdles and I had him declared for the ride but he hadn’t had enough rides over fences to be eligible for this race. It was hard luck on John but he got a great ride from Simon.”

Limerick jockey Aine O'Connor had an easier time as she gave trainer Anthony McCann a first bumper success in the evening’s finale. On the back of a promising debut at Cork, Land Afar scored a clear-cut success, the 11/2 chance was in front before the straight and made the best of his way home to win by seven lengths from the Jonathan Sweeney-trained Can’t Beat History.

In the colours of owner Ciara Doyle, Hanbags N Gladrags ran out a cosy winner of the concluding handicap at Gowran Park on Wednesday for Ballingarry jockey Billy Lee and trainer Andrew Kinirons. It was a fair performance from the four-year-old which was running for the first time since October of last year. Bred by the owner’s father John, she came from well off the pace to beat the Conor O'Dwyer-trained Barretstown by a length and a half at odds of 10/1.

Lee was back in the winners’ enclosure at Cork on Friday where Lady Tilbury scored a comfortable success in the five-furlong auction series maiden. A 7/2 shot in the colours of MRC International, the David Marnane-trained two-year-old got to the front before the furlong pole and raced clear to win by three lengths from the Kevin Coleman-trained Woman Chief.

Chris Hayes was a winner again at Naas on Saturday where he took the seven-furlong fillies’ maiden on the Dermot Weld-trained Ezine. A short-head was the winning margin as the 4/6 favourite prevailed from the Sheila Lavery-trained Solar Breeze in the Juddmonte colours.

It was tight again as 100/30 favourite Drombeg Banner won the afternoon’s finale, the Irish Racing Writers Handicap over the near six-furlong trip. Trained by Ken Condon for owner Cian McAuliffe, the three-year-old battled well under Billy Lee to score by a short-head from the Fozzy Stack-trained Thunder Eclipse, following up on last month’s Cork success.

At Cork on Saturday, the Charles Byrnes-trained Metersandmasks scored an eight-length success in the two and a half-mile handicap hurdle in the colours of Pauline Twiss and John Twiss. A 20/1 chance under in-form Phillip Enright, the winner came from well off the pace to lead approaching the final hurdle and win from the Ray Hackett-trained Rock On Seamie.

Billy Lee made it four for the week when giving Tom Mullins success at big odds at Leopardstown in recent times and he struck with 66/1 winner Female Soldier in the 10-furlong fillies’ maiden at the Dublin track on Sunday. In the trainer’s wife Helen’s colours, the 66/1 chance led close to the finish to beat Dermot Weld’s Zaniyka by a neck with the Aidan O'Brien-trained even money favourite two and a quarter lengths away in third place. Mullins won the Group 3 Killavullan Stakes with 33/1 chance Stela Star in 2019 and scored with 50/1 shot Red Linn at the course last July.