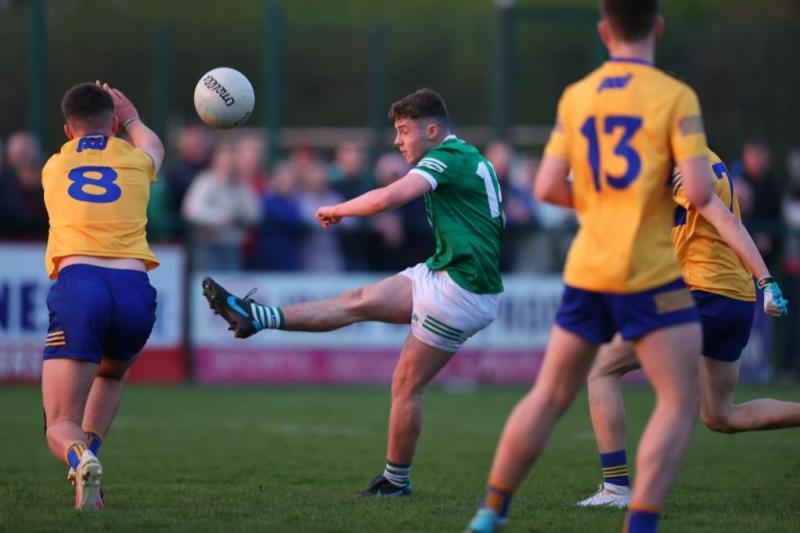 DISAPPOINTINGLY beaten by Tipperary's late burst of scoring a week earlier, Limerick's minor footballers got their season back on track with a stirring 2-8 to 0-9 victory over a fancied Clare side in the second qualifying round of the Munster Championship in Mick Neville Park on Thursday evening.

A blistering start which left them leading by five after seven minutes gave them an advantage they never surrendered although they did face some anxious moments around the three-quarter mark the Banner pinned them back deep in their own territory.

However, unlike their opener, Limerick held their shape under pressure and were still able to exploit the speed on the break which hallmarked their early breakthrough. The two late breakaway scores it yielded gave them the breathing space to hold out.

Limerick flew out of the traps, Luke Walsh shooting just over the crossbar within 13 seconds off Tommy Ryan's pass and kept up the momentum For Walsh to feed Bobby Smith off the next movement to drill to the corner of the net. Stephen Young then sent over a free to be met by one from Cathal Talty but, straight from the kick-out, Calum Boyle's screaming 70-metre solo opened up the space for his lay-off to Ryan who blasted past Cian Howard for a seven-point lead.

Play settled down after that as Smith replied to Conor Fennell's free before Young added another two frees. Coming up to the break, the Banner tightened their presence in midfield as the breeze picked up but tight Limerick defending forced them into shooting five speculative efforts wide and the only reward from their possession was Sean McMahon's free and Darren Keane getting their first score from play which narrowed the task facing them to 2-5 to 0-4.

They kept the effort up on the restart as Gavin O'Shea pointed with Limerick shooting four wides before Aidan O'Shea replied after which Banner pressure forced them back into their own half.

When Colin Riordan, Keane and Talty's free brought the gap back to four with ten minutes to go, they looked to have prevailed over the hosts' tiring middle third but they were still bing crowded out of the scoring opportunities closer to the posts.

A break from deep ending ending with Diarmuid Hynes's fist over the bar eased the pressure only for McMahon to reply off a free. But that was as close as Clare came although the goal they were searching for almost came as O'Shea pounced on a defensive fumble. However, his fly-kick to be stopped on the line before another sally from deep ended with sub Evan Curry closing the scoring.