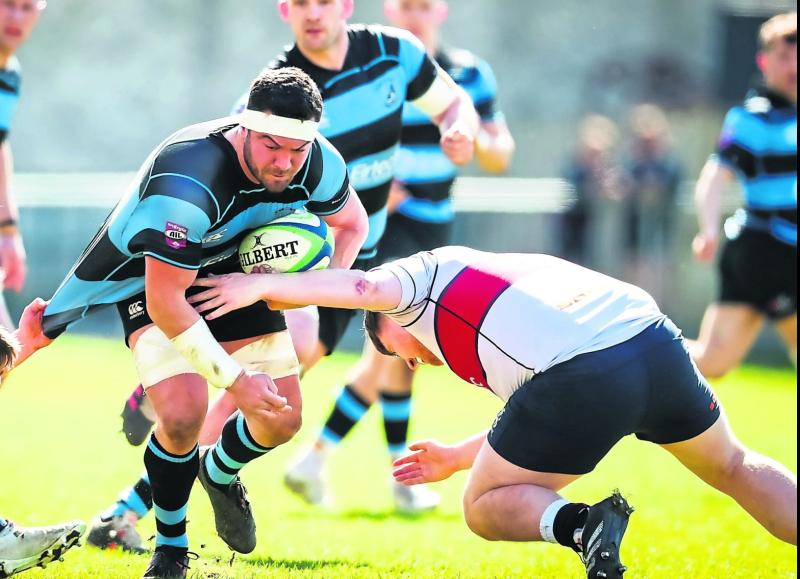 Shannon RFCs Kelvin Brown on the charge in the All-Ireland League Division 1B meeting with Old Wesley Picture: Keith Wiseman

IN-FORM Shannon RFC will look to take a giant step towards their promotion back to Division 1A of the Energia All-Ireland league when locking horns with Highfield in their 1B promotion semi-final play-off at Woodleigh Park on Saturday afternoon, 2.30pm.

Shannon travel to Cork on the back of six successive wins in Division 1B of the league. The Limerick side secured a win and a draw in their two AIL meetings with Highfield during the regular season. However, second-placed Highfield still managed to finish one point clear of third-placed Shannon in the league table.

The second Division 1B promotion semi-final play-off will see 1B table toppers Old Wesley - soundly beaten by Shannon last time out after they fielded a much changed side - host the Johen Murphy coached Naas side.

The Division 1B promotion final is due to take place on Saturday, April 30.

Shannon needed a bonus point win against Old Wesley last time out at Thomond Park to give them a shot at finishing second and gaining home advantage for their semi-final.

However, despite a terrific nine-try display with the Ulster-bound Jake Flannery adding six conversions, Pat O’Connor’s men had to settle for third place. Highfield won the right to entertain Shannon at Woodleigh Park following a hard-fought 28-24 triumph at St Mary’s College.

Shannon RFC head coach Pat O'Connor says the squad is acutely aware of just how big a challenge they face away to Highfield on Saturday in their promotion semi-final.

“We'd have taken it at the start of the season if you told us we would reach the promotion semi-finals.

“The boys have put a huge effort in. We didn't start the season as well as we would have liked to, didn't close out a few games, but we have gotten much stronger in that department over the past number of months. The boys are in a good place, but, look, we have nothing won yet.
“Form counts for nothing in a play-off at the end of the day. Highfield are a seriously good side, have been for the last number of years, probably due to Covid were robbed of going up to Division 1A, so we won't take anything lightly.

“We know just how big a challenge this will be. Look, we will just prep ourselves well, go from there and see what happens.

“We know we will have to play a little better than we have in the last few games to beat Highfield away, we are well aware of that.

“Our supporters have been brilliant all year. They have travelled in droves up North. It's been brilliant, they have joined in when we have won games in the celebrations, singing the song at the end. It is great to have them out in force too for the home games. It is also great to see the younger players out too, waving their flags for the team.”