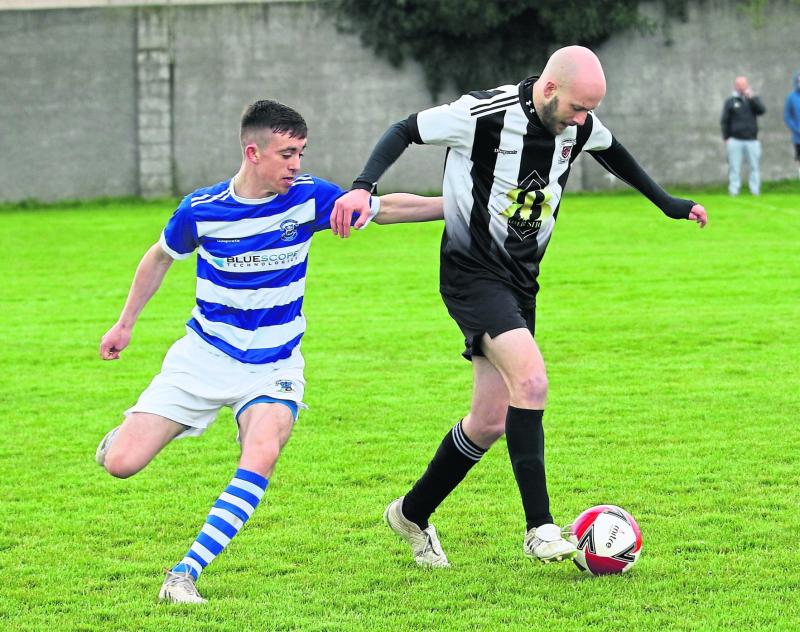 Chris Quinn, of Janesboro B, is closed down by Dion Lynch, Wembley Rovers, in their recent Division 2A Cup match Pic: Brendan Gleeson

ANOTHER mixed bag is on offer in Junior Soccer this week with a mix of important league and cup games for the various divisions.

On Sunday Pike Rvs are in FAI Senior Cup action when they host Cork outfit Everton. Much has been made of whether participation in the Senior cup in more of hindrance than a help, and while there are valid arguments for both sides, once they take the field Pike will be determined to see how far they can progress.

The Hoops had a good win last weekend at Ballynanty Rvs and with the FAI Junior Cup in the horizon, they will be looking to keep their good run going.

The Cork side ply their trade in the second tier of the Munster Senior League but will no doubt test the Junior side.

In midweek football Corbally Utd and Charleville battle it out on Wednesday.

In LIT, Ballynanty Rvs will be looking to bounce back to winning ways following last week’s defeat to Pike Rvs. They welcome and Aisling side smarting after losing their hold of the Munster Junior Cup last weekend at St Michaels.

In the Premier League (Bottom 6), the top two sides meet when Janesboro host Mungret Reg. Richie Burke’s men have a one-point advantage over Janesboro so the importance of the tie is obvious. Both teams have be renewed since the split in the league and their confidence is booming. This could be a cracking tie with goals aplenty.

In Division 1A on the same night the top two meet when Granville Rgs host leaders Hyde Rgs while Brazuca take on Croom in the Div 3A Cup semi final.

On Sunday there are another couple of Premier League games and Fairview will take outright lead if they can make it two wins in a week when they travel to Nenagh.  Aisling Annacotty host Regional Utd in the other tie.

The Div 1A Cup Semi Finals are scheduled with the John Tierney influenced Knockainey welcoming Hyde Rgs A and in the other tie surprise packets Castle Rvs and Patrickswell will vie for a final spot. In the League Granville make up another back game away to Shelbourne.

In the Division 1B League, Caherdavin need an immediate bounce back, to keep their title hopes intact, on a difficult trip to Mungret Reg while Corbally Utd B and Hyde Rgs B are in semi final action in the Division 2A Cup.

The Open Cup is one of the popular trophies locally and the quarter finals have thrown up some intriguing ties.
Newport C and Aisling Annacotty D played out a thrilling 8-7 game last week in favour of the Tipperary lads. Aisling will be keen for revenge here.

Division 3B champions Ballynanty Rvs B will be tested against higher league opposition in Kilmallock B but will also relish the challenge.

Wembley Rvs will be favourites to advance against Division 2B side Dromore Celtic.

In Division 3A, Croom Utd are breathing down the neck of the leading two and on Sunday they pay second placed Herbertstown who they can leapfrog with a win. Easier said than done though.