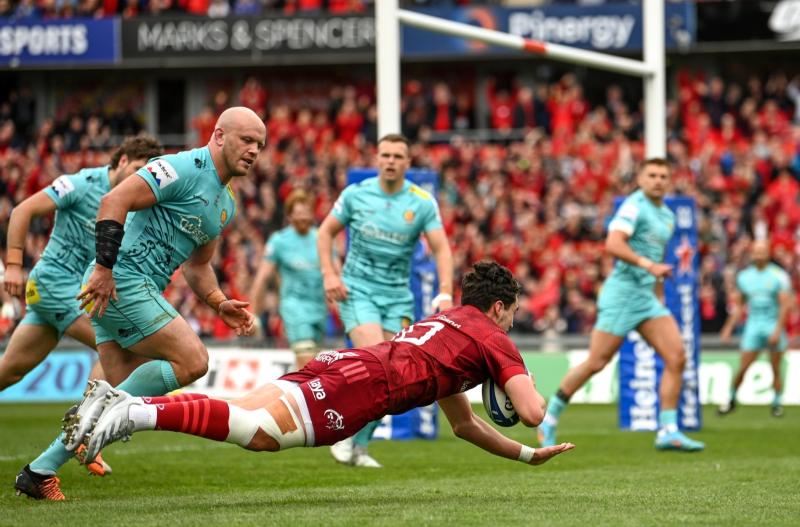 MUNSTER Rugby secured their place in the quarter-finals of this season's Heineken Champions Cup after seeing off a gritty Exeter Chiefs side 26-10 in their second leg last 16 tie at Thomond Park on Saturday.

Munster scored crucial tries in either half through Joey Carbery and Damian De Allende late on in front of a delighted attendance of 21,133 to secure a 34-23 aggregate win over their Premiership opponents to book a 19th Heineken Champions Cup quarter-final spot.

Out-half Carbery bagged all Munster's opening 19 points, the out-half finishing with 21 points in all.

Returning captain Peter O'Mahony turned in a Man of the Match display, helping the home side come out on top in the teak tough breakdown battle.

Despite playing into a strong breeze, Munster Rugby led 13-5 at half-time, having overcome their five point deficit from the first leg.

Munster rallied after falling behind to a Sam Maunder try for Exeter early on and the loss of Conor Murray to a yellow card to lead by eight points at the break.

Exeter hit back and a try on after 49 minutes when No 8 Jacques Vermeulen did enough to squeeze over to make it 13-10 and edge them in front by two points on aggregate after Simmonds fluffed the conversion.

A 74th minute try from De Allende after he linked up with Simon Zebo sealed the win for the home side.