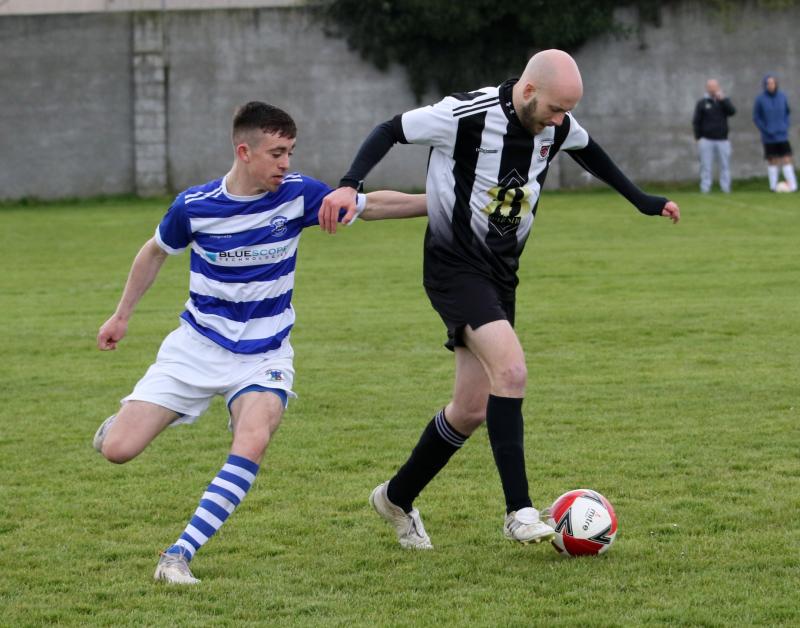 Chris Quinn, of Janesboro B, under pressure from Dion Lynch, Wembley Rovers, in their Division 2A Cup match on Sunday last Picture: Brendan Gleeson

TONIGHT, Thursday, the Premier League gives Pike Rvs the opportunity to get back to winning ways when they host Nenagh. A couple of bad results could not have come at a worse time for the Hoops but they still have time to salvage things. A win against Nenagh would give them the boost they might need for upcoming games.

In the Premier League (Lower Tier) Mungret Reg will be expected to maintain their lead when they host bottom side Geraldines while Janesboro can keep the pressure on if they beat another relegation threatened side in Kilmallock.

On Friday evening, Aisling Annacotty will be crowned Youth champions if they can avoid defeat at home to Fairview in a repeat of Wednesday’s Ger Ryan Cup final.

Most attention at the weekend will be on the Munster Junior Cup when holders Aisling Annacotty visit kingpins St Michaels on Saturday. When the draw was announced you felt Saints would prove too strong but a resurgence in form for the Annacotty side throws a different light on proceedings.

On Sunday Fairview Rgs go into their Munster Junior tie at home to Broadford, on a high after their superb win over Pike Rvs last Sunday. That was on the back of a couple of iffy performances so managers Jason Purcell and Stewart Purcell will be determined that their side keep up the intensity that saw them prevail at the weekend.

The big Premier League of the weekend is between second placed Ballynanty Rovers and third placed Pike Rovers. Balla are on the front foot at the moment but they meet a wounded Pike side who will determined to put things right. Always a game to produce the sparks, Sunday’s tie should be no different.

There are a couple of cracking ties in the Premier A League on Sunday with leaders Charleville taking on fellow challengers Fairview Rgs B. The Cork outfit have been going along steadily while Fairview had to adjust after losing a couple of players to the A squad.

Waiting for the leaders to slip up are Carew Park who face a tricky assignment away to Athlunkard Villa.

In Division 1A, Granville Rgs will overtake Hyde Rgs at the top of the table if they can beat a struggling Kilfrush XI.

In the Divisional Cups there are some testy ties for some of the league leaders.

In Division 2B, Aisling Annacotty D who have a superb squad but will not get things all their own way when they visit Newport.

The Division 3A Cup pits leaders Pike Rvs against a vastly experienced Mungret Reg D side while in the Div 3B Cup, Balla B take on Newtown B.