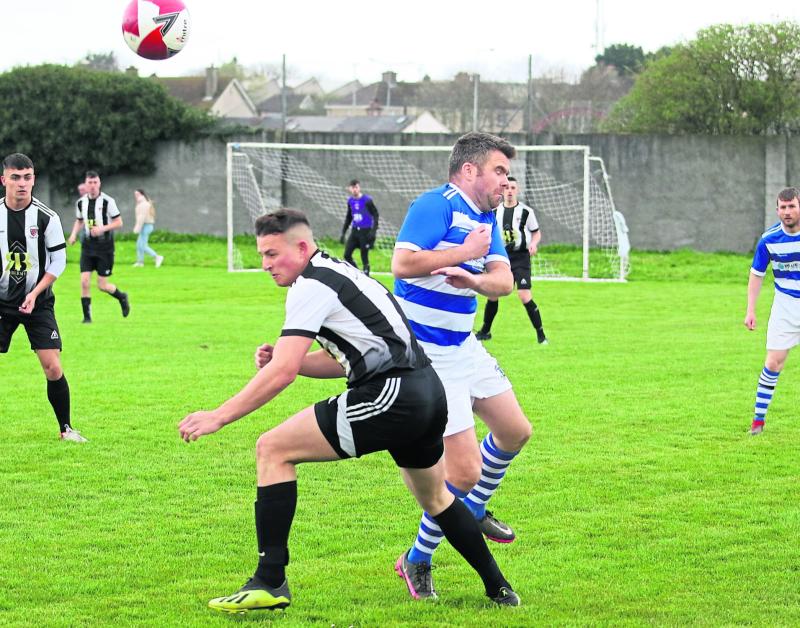 Aisling Annacotty 2 Nenagh AFC 0
Aisling Annacotty completed the line-up for the Lawson Cup semi-finals when they defeated Nenagh on Sunday morning to set up a tilt with Fairview Rgs for a place in the decider.

Aisling’s turnaround in form has been impressive and they carried on in Annacotty when Adam Foley fired them in front.
Shane Clarke tacked on a second before the break and they held out fairly comfortably in the second half.

Pike will meet Charleville in the other semi-final.

Pike Rovers 0 Fairview Rgs 1
The new format in the Premier League, wherein they split the league in two at the half way point, is providing plenty of entertainment to date, with the title race heading for a nail-biting finish with just six games remaining.

The latest chapter, in the Pike Field on Sunday morning, saw the top two teams in the league at the start of proceedings play out a highly entertaining game, with Fairview taking the honours thanks to a wonder goal from Shane Duggan.

The result could have gone either way in a game in which both sides battled a swirling wind as much as their opponents.
Steven McGann tested Aaron Savage early in the game with a volley from outside the box but the keeper was well positioned to hold the shot and at the other end a vicious swerving shot by Duggan was inches over the top.

Superb battling by Conor Layng saw him win possession on the right and cut in along the end line to tee up Colm Walsh O’Loughlin, eight yards out but Savage used his legs to good effect to turn the ball away to safety.

If the Fairview keeper’s save was good, his opposite number Gary Neville’s save minutes later was a breathtaking effort to deny Dave Hannon’s sweetly struck volley.

Early in the second half AJ O’Connor fired in a free kick that looked to be heading for the top corner before McGann deflected for a fruitless corner kick and the Pike midfielder was in action at the other end minutes later hitting a sweet effort from 30 yards that smacked off the crossbar before being hacked to safety.

Pike introduced Aaron Murphy and he nearly broke the deadlock when he cut in from the right but his low shot to the front post was saved by Savage.

The deadlock was broken eight minutes from time. Jeffery Judge gathered on half way, turned his marker and play the ball forward for Duggan. The former League of Ireland star left the ball run alongside him before letting fly from 35 yards with a dropping volley that gave Neville no chance.

With Pike chasing the game Duggan had a great chance to make sure of the points when Russell Quirke’s step over left him clear in the box. Once again Neville came up trumps but his efforts proved futile as the visitors held on to take the spoils.

Regional Utd 0 Ballynanty Rovers 3
Ballynanty Rvs kept up their good form to take over second spot in the Premier League following a 3-0 win at Regional Utd on Sunday.
On a high from last week’s win over Fairview, Balla took just four minutes to break the deadlock courtesy of Conor Ellis.
Eddie Byrnes made it 2-0 and Ellis wrapped up the tie before half time with second of the day.

Mungret Reg1 Prospect Priory 0
Pat Aherne scored the only goal of the game to give Mungret the spoils at home to Prospect. The result gives Richie Burke’s side a four-point gap at the top of the lower tier of the Premier League.
There was little to separate the side until Aherne chased James Roche’s long ball to slip the ball past Wayne Mullaly to win the points.


Kilmallock 0 Coonagh Utd 0
All eyes were on this relegation six pointer in Kilmallock but in the end the defences did their job to ensure a scoreless draw.
With a four-point gap to safety (and Coonagh), Kilmallock were in dire need of all three points with just five games remaining but the visitors did what was required to avoid defeat.