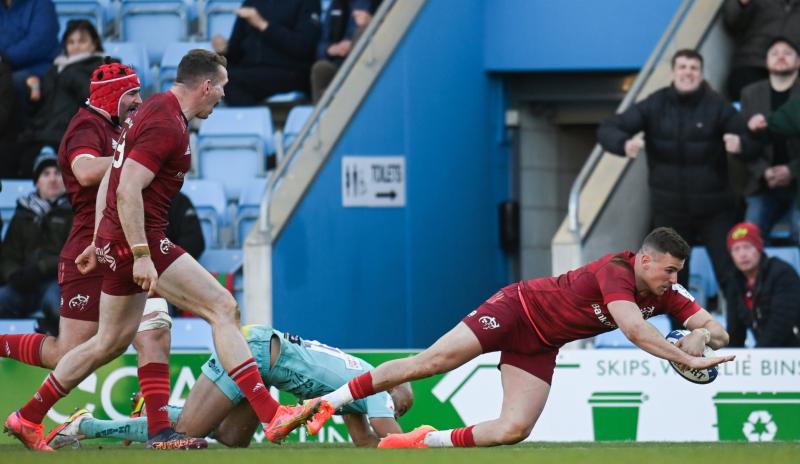 The sides will meet in the second leg at Thomond Park on Saturday next at 3pm.

Already shorn of the services of captain Peter O’Mahony, Tadhg Beirne, Joey Carbery, Andrew Conway, Gavin Coombes and Dave Kilcoyne due to injury injury, Munster were forced to re-jig their side still further before kick-off when Simon Zebo and replacement hooker Diarmuid Barron were ruled out due to acute gastroenteritis. They were replaced by tryscorer Daly who started in place of Zebo, while academy front-rower Scott Buckley came onto the bench.

2020 Champions Cup winners Exeter took the lead early on through Hogg’s try, the full-back being set up by wing Tom O’Flaherty who had slipped through the Munster defence with a superb running line.

Captain Jack Yeandle almost got over for a second Exeter try midway through the first half, but Munster were able to dislodge the ball before grounding.

The hosts would eventually grab their second score shortly before the break, flanker Vermeulen forcing his way over from close range to punish Munster for conceding a string of penalties – one of which saw replacement forward Jack O’Sullivan sent to the sin bin.

Munster, superbly led by stand-in captain Jack O'Donoghue, survived a seven-minute period with 14 men at the start of the second half, and got themselves on the score board with just less than an hour played as fly-half Ben Healy slotted a penalty from in front of the posts.

The visitors would then be handed a golden opportunity to get back into the game as Exeter received two yellow cards in two minutes – first wing Olly Woodburn and then replacement prop Patrick Schickerling.

Against the odds, Exeter managed to extend their lead as Hogg kicked a drop-goal from range, but Munster eventually capatalised on their two-man advantage on 66 minutes as Daly stepped inside to finish superbly.

Both sides were denied tries during closing stages – the TMO was called in to check an effort from Munster replacement scrum-half Craig Casey before Woodburn was halted by a super covering tackle from Keith Earls as he looked destined to go over in the corner for Chiefs.

Exeter ended the game in ascendency but were held up over the line in the final play of the game, leaving them with a five-point lead heading into next week’s second leg at Thomond Park.