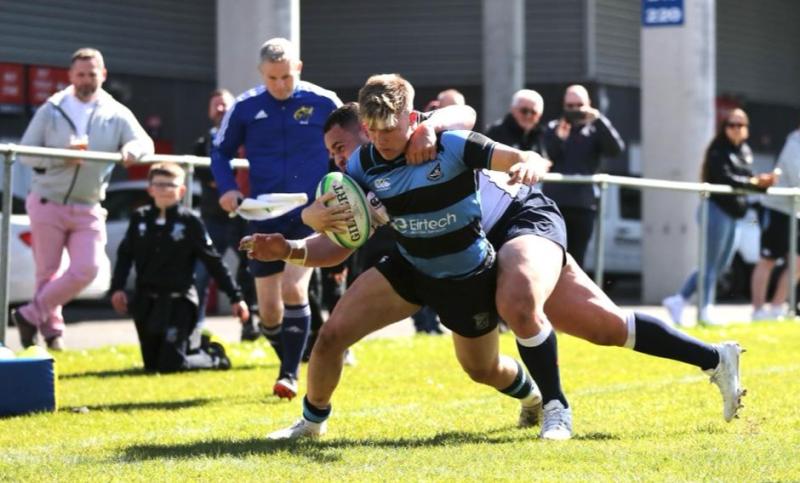 Alan Flannery on his way to scoring Shannon's second try in their bonus point win over Old Wesley in Division 1B of the Energia All-Ireland League at Thomond Park on Saturday Picture: Keith Wiseman

SHANNON RFC will be the only Limerick side involved in the play-off series in the All-Ireland League later this month following the completion of the final round of regular season fixtures on Saturday.

Shannon, who claimed a thumping 61-12 bonus point victory over an understrength Old Wesley side in their final round game on the back pitch at Thomond Park, will now set their sights on a mammoth Division 1B promotion semi-final date with Highfield in Cork on Saturday, April 23.

Highfield edged past St Mary's College in Dublin to claim a second place finish in the 1B table, one point ahead of Shannon and with it home advantage for their semi-final play-off.

Shannon are unbeaten in their two regular season fixtures against Highfield this season.

On a perfect day for rugby, Shannon took full advantage of table toppers Old Wesley's decision to field a much-changed side for the trip to Limerick scoring nine tries in all, including being awarded two penalty tries as their scrum held sway. The Parish side scored five tries in the opening half to lead 35-5 at the break.

The reliable Jake Flannery also converted four of the tries.

WATCH: Penalty try for @Shannon_RFC who have bonus point in the bag as they lead Old Wesley 28-0 after 35 mins in All-Ireland League Division 1B at ThomondPark. Munster hooker Declan Moore very influential for home side #LLSport #EnergiaAIL pic.twitter.com/kkQeLtAOkz

The AILs most successful club added further five-pointers from Brown, his second of the game, Colm Heffernan and Ian Leonard before full-time.

In Division 1A, sixth-placed Young Munster, whose hopes of making the semi-finals ended with their home defeat to Cork Constirution, signed off on their AIL campaign with a 17-10 defeat away at Ballynahinch at Ballymacarn Park. The Limerick side had trailed 10-11 at half-time, their points coming courtesy of two first half tries, from Shane Malone and Eoin O'Connor.

Ballynahinch will face UCC in the relegation play-offs on April 23.

Also in the top division, seventh-placed Garryowen fell to a heavy 34-12 defeat to Dublin University at Dooradoyle. The Light Blues, who trailed 0-17 at half-time and 0-27 into the second period, had tries from Ed Barry and Tony Butler, while Butler also added a conversion.

In Division 2A, Old Crescent missed out narrowly on securing a top four promotion play-off position, despite scoring a convincing 33-10 bonus point victory over Rainey Old Boys at Takumi Park.

Crescent, who trailed 7-10 at half-time, turned in a highly impressive second half display to cruise to victory.

The home side scored five tries in all through Tevita Tali Toia in the opening half, while Val McDermott, the impressive John Hurley, Ronan McKenna and Dean O'Grady all dotted down in the second period.

Crescent finished in fifth place in the 2A table, just one point behind fourth-placed Ballymena, who secured the final promotion play-off semi-final spot.

Also in Division 2A, UL-Bohs slender hopes of making the promotion play-offs were ended with their 22-19 defeat away to Dolphin at Musgrave Park.

Seventh-placed UL-Bohs, who trailed 7-19 at half-time, scored three tries in all in Cork.

Meanwhile, in Division 2C, Bruff, who had guaranteed their All-Ireland League status for next season with an impressive away win over Skerries in their previous fixture, fell to a 20-38 defeat at home to Bangor.

Bruff, who scored three tries in all, including one from Sean Darcy and Eamonn Cooke, trailed 5-10 at half-time.