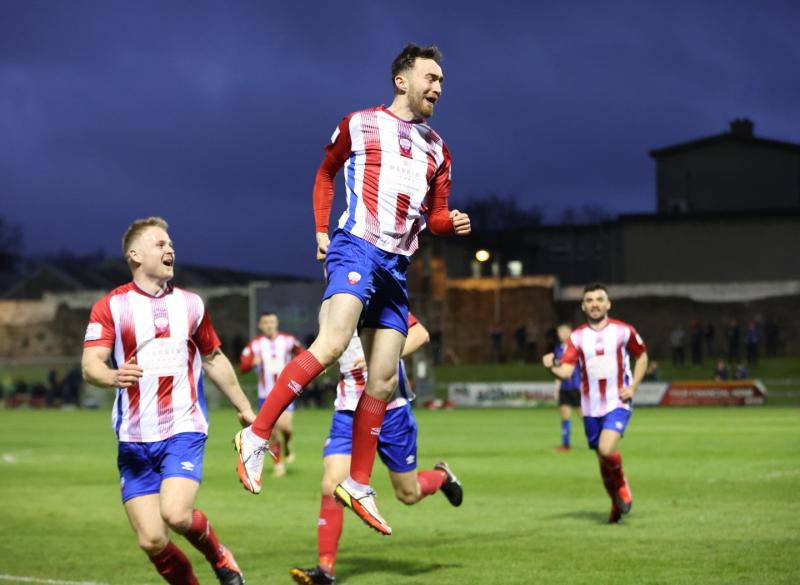 Dean George celebrates after scoring the first of his two goals against Athlone Town in the First Division at the Markets Field on Monday night Picture: Kieran Ryan-Benson

A goal in either half from the substitute pushes United into fourth place in the First Division table as the league nears one round of complete fixtures.

Treaty manager Tommy Barrett stuck with the same starting side that defeated Waterford FC in their last outing.

Played in blustery conditions, Treaty were slow to settle but did enjoy the better of the half. Their first major opening came when Charlie Fleming had an effort from just outside the area. His low drilled shot was well saved by Micheál Schlingermann before Aaron McBride blocked Hanlon’s follow up.

Athlone to their credit, poised a threat on the break and Youri Habing hit the crossbar ten minutes before the interval – unleashing a powerful drive from 35-yards, that failed to dip before rebounding away to safety.

Martin Russell was left to rue that near miss as his side fell behind shortly afterwards.

The goal arrived three minutes before the interval. George, who’d been introduced for the injured Kieran Hanlon just six minutes earlier pounced for the lead strike. Stephen Christopher’s cross was met by Matt Keane who saw his header well saved by Schlingermann but George followed up to finish from close range.

His second, just shy of the hour mark, was of similar ilk. This time, Christopher’s shot was blocked but fell into George’s path before he passed low to the corner to seal the points.

The winners were able to play on the counter-attack and threatened more goals, through Enda Curran and his replacement Willie Armshaw.

In the end, George’s strikes were enough to secure consecutive league wins for the first time since July 2021.

Treaty make the trip to Bray this Friday, before they face Athlone Town again on April 15th.