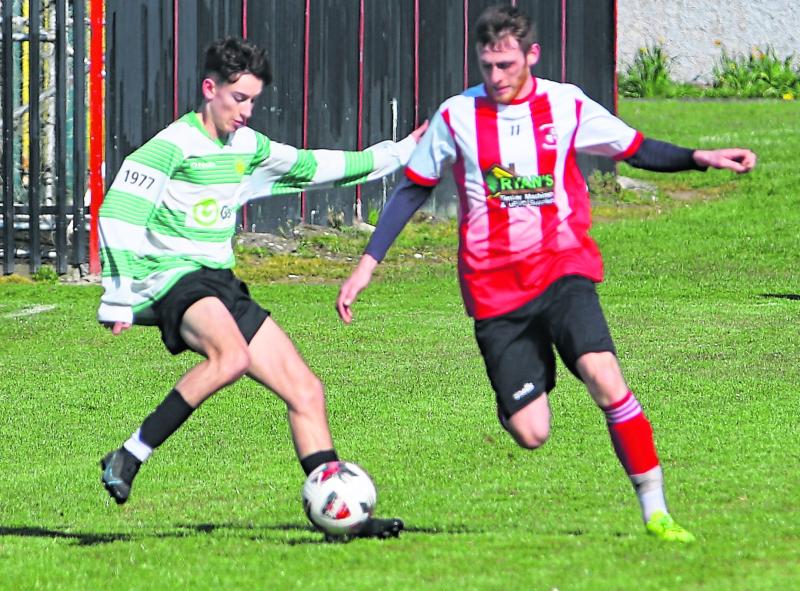 Ten-man Ballynanty Rvs have made it a three-horse race in the Premier League after defeating joint leaders Fairview Rgs at the Fairgreen on Sunday.

After getting the better of the home side in the Tuohy Cup final, you felt Fairview would be more geared for Sunday’s encounter but, despite much possession, in truth they hardly threatened the Balla goal throughout.

The game, despite neither keeper being forced to make a save, kept the crowd entertained. It was a game not suited to the faint hearted, spoiled somewhat by the lack of linesmen to assist the Referee who had his hands full. The shortage of Referees is beginning to bite.

Fairview continued with the slow build up that did not work in the Tuohy Cup final while Balla’a more direct approach was proving a better fit for the occasion.

The first chance of note saw David Donnan pick up from some sloppy defence to tee up Eddie Byrnes but his shot was deflected away from goal by the alert Jamie Enright.

Shortly after Adrian Power nearly sneaked in at the back post but put the ball straight into the hands of Aaron Savage.

The deadlock was broken midway through the half when Adrian Power’s inch perfect ball into the box saw Eddie Byrnes drift between two defenders to head home from six yards.

Chances were few and far between but things looked to be swaying Fairview’s way when Balla were reduced to ten men early in the second half.

However, rather than buoying the home side, it was Balla who lifted their game and midway through the second half doubled their lead. Another gut busting run by Power saw him drill a low ball across the box to Conor Ellis whose shot towards the back post saw Liam Brock apply the finishing touch from close range.

Fairview upped the temp in their bid to get back in the tie but they did not have their scoring boots on. Chances by Shane Duggan, Eoin Duff and Jeffery Judge all went close but did not bother Stephen McNamara in the Balla goal.

The result closes the gap between the leading two and Balla to just a single point. All eyes will now be on next weekend’s clash between the top two, Pike and Fairview.

With neither side challenging for honours, Sunday’s game between Nenagh and Regional was more about pride than position.

Nenagh snatched the points in an evenly fought game with a last-minute winner from Adam Ryan.

In the Premier League’s lower tier, Geraldines fate was more or less sealed after they suffered a heavy defeat to fellow relegation battlers, Kilmallock.

The home side had no answer to a rampant Kilmallock side although striker Alan Barry turned back the clock to score twice for the home side.

Substitute Stephen Quirke bagged a hat trick while there were tow goals apiece for Paul Moloney and Killian Hayes. Kyle Tierney made up the tally.

Pike Rovers youths fell at the penultimate hurdle in the Munster Youth Cup when Co Limerick side Galbally beat them 3-1 to reach the final.

It was hard luck on a superb Pike side whose goal came from Jamie Hogan.

In the Premier A League, Charleville powered back to the top of the table with an impressive 6-3 win at Moyross. Cian Power with a double and Dylon Bourke accounted for the home goals while Shane Dillon (3), Cian McNamara and a Donal O'Connell brace won it for Charleville.

Carew Park are a point behind with a game in hand after beating Corbally Utd 4-1. Mark McGrath (2), Gary Griffin and Adam Dore scored for the winners; David Healy replied.

Goals from Christy Doyle and Darren Collins (2) gave Newport a 3-2 win over Cappamore.

Granville Rgs are still well positioned to win the title after recording a hard-earned win over Patrickswell. Dylan O’Byrne scored the only goal of the game.

Steven Kiely and Emanuel Alfred were on the mark as Summerville beat Star Rvs 2-0.

In Division 1B, Pallasgreen maintained their league challenge with a 4-0 win at Glenview. Vinnie Ryan (2), Corey Ryan and Daire O'Connor scored.

Sean O'Haodha and Ben Belazi scored for Aisling in a 2-1 win at Cals for whom James Power netted.

Dean Power’s goal for Caherconlish saw them leap frog Janesboro B into second spot in Division 2A.

Lee Park (2) and Jamie Collins scored for Lisnagry A but they fell 4-3 to Dromore Celtic and goals from Dean McNamara, Dean Kerley, Lee Madigan and Aaron Smith.

Alan Finucane and Andy Angle were the scorers in Mungret Reg D’s win over Abbey Rvs.

Peter Hodnett and Gearoid Brennan scored for Coonagh Utd B but they fell 3-2 to Ballynanty Rvs B. Barry Quinn scored twice with Derek Daly netting the winner.