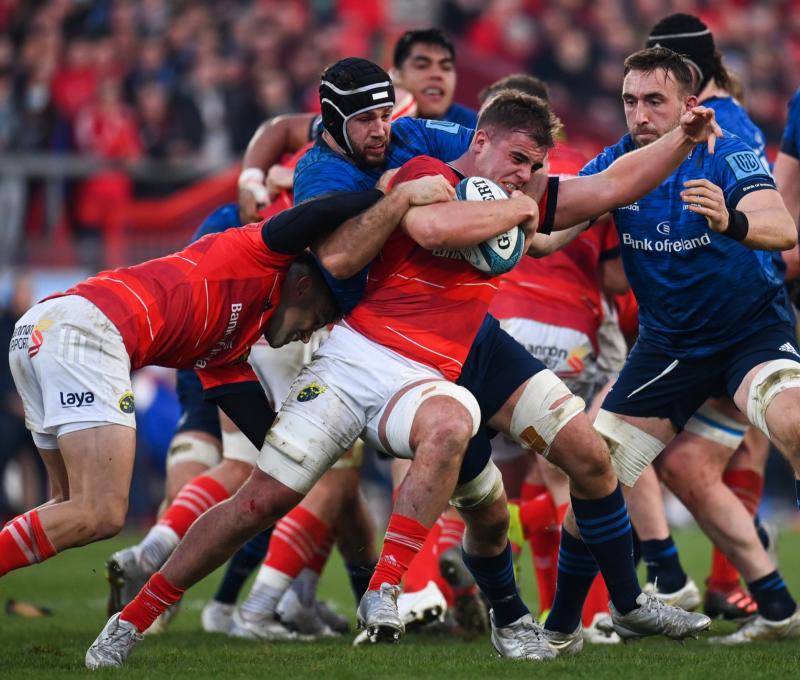 Munster's Alex Kendellen is tackled by Caelan Doris and Jack Conan ,of Leinster, during the United Rugby Championship fixture at Thomond Park on Saturday night

MUNSTER Rugby lost for the fourth time in five meetings with arch rivals Leinster in Limerick when succumbing 19-34 in their United Rugby Championship at Thomond Park on Saturday night.

Munster trailed their visitors 12-14 at half-time, with all of the home side's points coming courtesy of Joey Carbery penalties.

The home side was dealt a blow in that opening 40 minutes when powerful number eight Gavin Coombes was forced off with an ankle injury.

Coombes injury is a concern ahead of next Saturday's big Heineken Champions Cup last 16 first leg clash with Exeter Chiefs at Sandy Lane.

Leinster took a grip on the game in the third quarter with tries from James Lowe and Jimmy O'Brien on the 47th and 57th minutes respectively.

Munster, who had won their last ten home games in all competitions since Connacht beat them at Thomond Park in the Rainbow Cup last May, did hit back with a try from South African centre Damian de Allende.

However, a second try from Lowe sealed victory for Leo Cullen's charges.

Munster missed the influence of the likes of Ireland international Tadhg Beirne in their pack, especially at breakdown time.

Munster will also hope that the likes of David Kilcoyne, Andrew Conway, Simon Zebo available for their crucial upcoming fixtures in both the Heineken Champions Cup and United Rugby Championship.