Four Limerick wins in dramatic penultimate round of All-Ireland fixtures 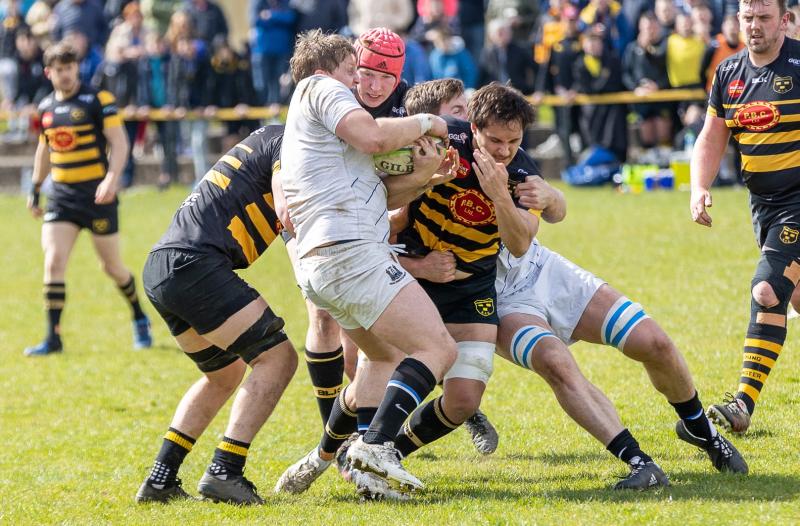 THE penultimate round of regular fixtures in the Energia All-Ireland League produced a dramatic day of action as four Limerick sides recorded victories.

The result saw Munsters' slip to sixth place in the 1A table and now unable to catch fourth-placed Cork Con in the race to book a semi-final spot. Munsters' final regular season game is away to Ballynahinch next Saturday.

Munsters' had beaten Cork Con twice already this season, 24-17 away in the AIL at Temple Hill last October and also at home in the Munster Senior Cup. When the Limerick side led 19-13, some 10 minutes into the second half with three tries in the bag in the latest meeting, the Greenfields side looked well placed to secure a precious victory.

However, 14 unanswered points from the Leesiders wrenched control of the game back from the home side who ended up without even a losing bonus point.

Gearoid Prendergast's Young Munster side trailed 7-13 at half-time, with their points coming from an Eoin O'Connor try, converted by Evan Cusack.

Two tries at the start of the second half, from winger Conor Phillips and hooker Shane Malone off a well-executed maul, saw Munsters' hit the front at 19-13 after Cusack landed one of the conversions.

However, Munsters' lead was short-lived as further Con tries from centre Niall Keneally and hooker Max Abbott helped seal a precious eight-point victory for the visitors.

Also in 1A, Garryowen secured a last gasp 15-14 victory away to UCC thanks to Tony Butler's dramatic penalty goal. The results saw the Light Blues move up to seventh place in the table.

Garryowen raced into a 12-0 interval lead with tries from Dylan Murphy and Jack Delaney. Tony Butler also converted one of the tries, before landing his match-winning penalty after UCC had fought back to lead 14-12.

In Division 1B, Shannon have secured a promotion play-off place with an impressive 31-6 bonus point victory away to Banbridge at Rifle Park. It was in-form Shannon's fifth league win on the bounce.

The result sees Shannon sit in third place in the table, one point behind second-placed Highfield with just next weekend's final round of regular season fixtures to come.

While Shannon host runaway leaders Old Wesley on the back pitch at Thomond Park next weekend, Highfield travel to fifth-placed St Mary's College.

Shannon led hosts Banbridge 8-3 at half-time, thanks to an early Jake Flannery penalty and try from Jordan Prenderville off a well-executed maul.

Kelvin Brown's 64th minute try saw the visitors tighten their grip on the game at 19-6.

Brown then added a second try in the 75th minute, before Alan Flannery went over for the bonus point try late on, with Jake Flannery converting.

In Division 2A, Old Crescent are also in the promotion play-off picture going into next Saturday's final round of regular season fixtures despite losing out 33-13 to leaders Queen's University in Belfast.

However, sixth-placed Crescent's fate is out of their own hands as they trail fourth-placed Ballymena by a point.

Old Crescent had trailed Queen's by just a single point, 13-14, after an hour of the contest.

However, 19 unanswered points from the students proved decisive in their success. Crescent jumped into an early 7-0 lead following Val McDermott's early try which was converted by John Hurley.

A Hurley penalty coming up to half-time had the Rosbrien side 10-7 to the good. However, QUB led 14-10 at the break thanks to their second converted try of the contest.

Queen's scored three second half tries to ease to victory.

Also in Division 2A, UL-Bohemian scored a gritty 26-21 victory over MU Barnhall at UL North Campus.

UL-Bohs led 7-3 at half-time, after a try from Colin Ryan which was converted by Harry Byrne.

The Red, Red Robins increased their advantage soon after the restart when Paul Clancy dotted down, with Byrne again adding the extras.

A third UL-Bohs try from Colin Madden, who cleverly sniped over, saw the Annacotty side lead, 19-14, before visitors Barnhall hit back with a converted try to regain the advantage at 21-19 with 10 minutes remaining.

The see-saw nature of the scoring continued when UL-Bohs were awarded a penalty try - the bonus point try - for 26-21, an advantage the home side retained until full-time.

In Division 2C, Bruff turned in a resilient 80-minute display to overcome Skerries 42-37 in a thrilling free-scoring contest in Dublin.

Bruff showed tremendous resolve to close out the win, having lost a player to a red card in the opening half of the contest. The South Limerick side, who trailed 14-17 at half-time, scored six tries in all to guarantee their place in Division 2C of the league next season.

Bruff scored two tries in the opening half from Davy O'Grady and Kieran Bennett, with Paul Collins converting both.

The Limerick side bagged four more tries in the second half to secure the bonus point as Bennett grabbed his second try of the game, while Kieran Dwyer, Johnny Clery and Fergal Cooke also crossed the whitewash. Paul Collins duly landed all four conversions to seal an exciting win.