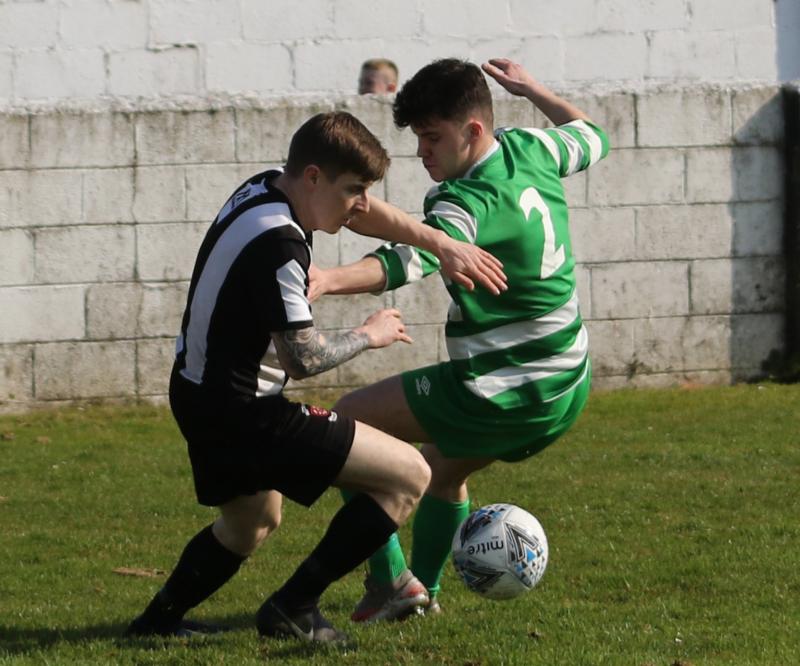 Jack Fitzgerald, of Janesboro, is put under pressure by Sean Hartney, Coonagh in their Premier League fixture in Janesboro on Sunday morning Picture: Brendan Gleeson

Fairview Rgs 6 Carrigaline 1
Fairview Rgs eased to victory in the Munster Junior Cup today to join Aisling Annacotty in the hat for the last eight of the provincial tournament.

After a hard fought 4-2 win over the same opposition in the FAI Junior Cup, Fairview were on guard for a tough outing but in truth they dominated rom the word go and ran in six goals over 90 minutes.

AJ Moloney will take most of the plaudits after bagging an impressive hat trick but he had support all over the park.
Shane Duggan was superb again as were Martin Deady and Russell Quirke in a good team performance.

Quirke used his strength to create an opening in the area and tucked the ball away to put Fairview on their way.
A long ball into the Cork defence caused havoc as Moloney raced onto the loose ball to lob over the advancing keeper to double the lead before the break.

Once Moloney added a third after the restart it was contest over. The young striker completed his hat trick before top scorer Eoin Duff and Paul Danaher put a gloss on the scoreline.

Coachford 2 Carew Park 2
(Coachford won 8-7 on penalties aet)
Carew Park bowed out of the Munster Junior Cup on Saturday afternoon when a goal deep into injury time resulted in their game with Coachford being decided by a penalty shoot-out.

Despite plying their trade in the second tier of the local leagues, Carew Park showed no fear against the Cork Premier League leaders and with a little luck would now be in the hat for the quarter finals.

Things looked to be going Carew’s way when a Pat Boyle special from a free kick outside the area caught home keeper Steven Murray at his near post.

Carew held the lead at the break but after the restart the home side were back on level terms when left winger Mike O’Regan squared the ball for Declan Keating to tap home.

The visitors remained in the ascendency and regained the lead when a a through ball from Adam Dore put Jamie O’Sullivan away on the right he cut inside the full back and slotted it into the bottom left corner.

When the 90 minutes were up, it looked like Carew had done enough but the officials played eleven minutes injury time, just enough time for Cialan O’Sullivan to lash the ball home in a goalmouth scramble.

Seconds later the whistle sounded and a scoreless extra time followed before penalties ensued.
Coachford proved just more accurate to claim their second Limerick scalp of the competition, having beaten Prospect in an earlier round.

Regional Utd 1 Pike Rovers 3
Its all square at the top of the Premier League after Pike Rvs won their outstanding game, beating Regional United 3-1 in Dooradoyle.

Pike’s win puts them level on points with Fairview Rgs on 34 points, four clear of nearest challengers Ballynanty Rvs.
Having played Regional four times already this season, the fear for Pike was that familiarity could dampen enthusiasm.
However, an early goal soothed the nerves of the league leaders.  Robbie Williams’ ball over the top saw Conor Layng’s chase rewarded when he teed up Colm Walsh O’Loughlin to fire in the opener.

Regional responded well and David Cowpar scored his first of the season to tie-up the game.
The visitors responded well and another good run by Layng ended with the ball being driven across the face of goal where the inrunning Evan Patterson applied the finishing touch.

Before half time, Pike increased their lead. On this occasion top scorer Layng took the plaudits when he raced onto Danny O’Neill’s through ball and rounded the keeper before netting.

The second half proved a much tighter affair with either side able to break through.

Ballynanty Rovers kept alive their hopes of catching the leading two in the Premier League following a 3-1 win over Nenagh at LIT on Sunday morning.

The Tuohy Cup champions were delighted with the result but, by their own admission, were rather cumbersome and slightly off the pace.

The first half ended scoreless with little to choose between the sides.

The half time team talk in the home dressing room paid dividends as Balla showed more spark in the second half.  They got the break through when Eddie Byrnes raced down the right and played the ball low towards the front post.  A sublime touch by Adrian Power deflected the ball away from Nenagh keeper Eoghan Tinkler and into the back of the net.

The relief from the home fans was palpable but they were rocked back on their heels when Nenagh’s top scorer Matthew Spain reacted quickest firing in the equaliser.

Balla got back in front with twelve minutes to go.  Dermot Fitzgerald scoring in a crowded goal mouth.
It was only in the final minute that Balla made sure of the points, when Eddie Radcliffe got on the end of a superb flowing move to tuck away Power’s delivery.

Prospect Priory 4 Geraldines 1
It’s getting tight at the top of the lower tier of the Premier League following the weekend results.

Prospect join Mungret in top spot after recording a 4-1 win over Geraldines.

Danny Colbert put Prospect on their way and an own goal typified ‘Dines plight to make it 2-0.

George Daffy pulled one back for the visitors but a good finish from the home side saw them tack on further scores from Charlie Hogan and Tyrique Leamy.


Janesboro 4 Coonagh Utd 1
Janesboro are just a point back from the leading two after they beat Coonagh 4-1 in Pearse Stadium.

Goals from Kieran Long, Christy O'Neill, Morgan Clancy and Aaron Grant accounted for the winning scores. Ian Considine netted for an out of sorts Coonagh XI.