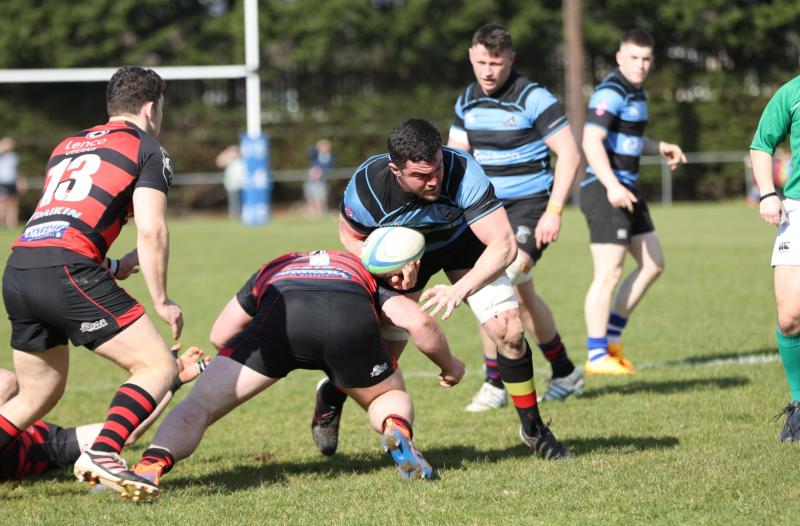 Kelvin Brown looks to make a break for Shannon in their All-Ireland League Division 1B fixture with City of Armagh on Thomond Park's back pitch on Saturday Picture: Kieran Ryan-Benson

THERE were three Limerick wins as the Energia All-Ireland League regular season resumed on Saturday after a three-week break.

Shannon, in Division 1B, and Old Crescent in 2A, boosted their hopes of securing promotion play-off places with precious league wins, while Bruff also recorded a hard fought victory in Division 2C.

In Division 1A, play-off chasing Young Munster had to make-do with taking a losing bonus point from their 18-12 defeat to top four rivals Terenure College at Lakelands.

The result leaves Young Munster in fifth-place in the top flight table, but just two points behind fourth-placed Cork Constitution. The two Munster rivals will go head-to-head in a crucial penultimate round regular season fixture at Tom Clifford Park on Saturday next, 2.30pm.

Also in Division 1A, eighth-placed Garryowen also picked up a losing bonus point from a trip to Dublin after succumbing 33-27 to UCD at Belfield.

In Division 1B on Saturday, third-placed Shannon boosted their hopes of securing a top four promotion play-off spot after easing past City of Armagh 29-20, securing a bonus point in the process, on the back pitch at Thomond Park.

Shannon now sit just one point behind second-placed Highfield with just two series of games to go. The Parish side are also six points clear of fifth-placed St Mary's College. Shannon travel to eighth-placed Banbridge on Saturday next.

In Division 2A, fifth-placed Old Crescent also maintained their hopes of securing a promotion play-off spot after easing past Ballymena 25-17 at a sun-kissed Takumi Park.

Old Crescent are just one point behind fourth-placed Ballymena with two games to go in the regular season.

Also in Division 2A, UL-Bohemian picked up a losing bonus point in their 22-15 defeat at the hands of Cashel at Spafield.

UL-Bohs sit in eighth spot in the table.

Bruff were the third Limerick side to record a win on Saturday when scoring a gritty 25-24 victory away to Clonmel in Division 2C. The victory sees Bruff sit in seventh place in the table, 10 points clear of basement side Clonmel and six clear of ninth-placed Sundays Well.

In Division 1A, Young Munster trailed Terenure College 3-11 at half-time in Dublin, the Limerick side's points coming from an Evan Cusack penalty.

Cusack then kicked two penalty goals after the restart to haul Munsters' to within two points of their hosts at 9-11.

An Alan Bennie try, converted by Jake Swaine, turned the game in Terenure's favour, helping the home side into a 18-9 lead.

However, Cusack's late penalty goal helped rescue a losing bonus point for a gritty Munsters' side ahead of next weekend's crucial derby clash with Cork Con.

Also in the top flight, Garryowen trailed UCD 17-21 at half-time at Belfield.

The Light Blues got off to an excellent start with a try from Colm Quilligan, before Jack Delaney added a second for the visitors who trailed 10-14. However, a converted try for the students before half-time helped them into their 11-point lead.

Back came Garryowen, however, and an intercept try from Liam Coombes hauled the Limerick side right back in the game, with Michael Sheehan adding the conversion.

Winger Tommy O’Hora then added a fourth try for Garryowen for a 22-21 lead. A fifth try for the visitors, scored by Evan Maher, pushed the Dooradoyle side into a 27-21 lead in a free-scoring contest.

However, two late tries for the Dublin students ultimately swung the contest in their favour.

In Division 1B, Shannon, after an impressive first half showing, led City of Armagh 26-13 at half-time at a sun-drenched Thomond Park.

Aran Hehir set Shannon their way with a first minute try, converted by John O'Sullivan for a 7-0 lead. The home side was then awarded a penalty try on 24 minutes for a 14-3 lead.

After Armagh hit back with their opening try, Shannon responded in style with Alan Flannery dotting down in the 37th minute and then Jamie McGarry adding the bonus point try just before half-time to build a substantial 13-point interval lead.

Visitors Armagh hit back with a third quarter try to trail by just six points, 26-20, before a John O'Sullivan penalty on 69 minutes eased the home side to a precious victory.

In Division 2A, fifth-placed Old Crescent trailed Ballymena 5-7 at half-time at Takumi Park. After falling behind to a converted try on 10 minutes, Crescent hit back with a try of their own through Gary Fitzgerald.

Val McDermott then struck for a 49th minute try for the home side, who trailed 10-17 on 64 minutes.

Old Crescent then hit the front on 78 minutes, thanks to a try from Paul McNamara and a Ronan McKenna penalty for 18-17.

A second try for Paul McNamara, converted by McKenna, then sealed the win for Crescent who travel to league winners Queen's University, Belfast on Saturday next.

Also in 2A, UL-Bohemian trailed Cashel 8-15 at half-time. Harry Byrne kicked a first half penalty goal for the Red, Red Robins, while Joe Murray crossed for a try.

A converted try from a well-executed line-out maul brought UL-Bohs level, 15-15, after the restart. However, Cashel struck for a decisive converted try to secure the precious four points on offer.

Bruff had to produce a strong second half comeback in seeing off Clonmel by a single point in South Tipperary.

Division 2C basement side Clonmel led the Munster derby 17-6 at half-time. Paul Collins kicked two penalties for the Limerick side in that opening 40 minutes.

However, Bruff stepped up their display after the restart, scoring three tries through Davy O'Grady, Tony O'Connell and Johnny Clery. Collins also converted two of the tries for Bruff who scored 19 unanswered points in the second half before Clonmel struck for a late converted try to secure a losing bonus point.