Limerick Junior Soccer Round Up: Aisling Annacotty through in Munster Junior Cup 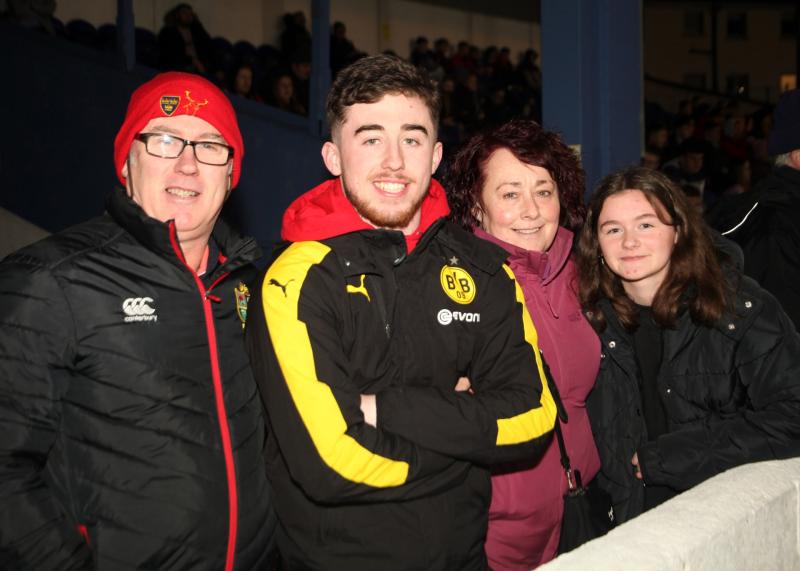 A super performance by Munster Junior Cup holders, Aisling Annacotty saw them beat Clonmel Town to reach the quarter finals of this year’s competition.
By their own admission, Aisling’s performances have been inconsistent of late but on Sunday they reverted to type to record another memorable victory.
The holders took the lead when a superb lay off by Shane Clarke put Adam Foley through and the striker kept his cool to slot into the corner.
Clonmel responded when the dangerous Kyle Cuddy scored to level the tie.
A determined Aisling regrouped and a sweet one-two between Liam Quinn and Shane Clarke saw the latter upended in the area. Clarke dusted himself down and slotted the spot kick for what proved the winning score.

Regional Utd bowed out of the Munster Junior Cup at the hands of St Michaels on Sunday afternoon.
Injury forced the Limerick side to field a number of youth players but all can hold their heads high after a battling performance that took one of the Premier sides in the country to extra time before succumbing.
Scoreless at 90 minutes, the visitors took the lead in the first period of extra time through Edmond O’Dwyer.
The goal sucked the energy out of the home side and further goals from O’Dwyer and Jimmy Carr put a false gloss on the scoreline.

Pike Rovers advanced to the semi finals of the coveted Lawson Cup after they trudged to a 2-0 win over a battling Moyross XI in the Pike Club on Sunday morning.
Unbackable favourites going into the tie, Pike kept to the script when they took an early lead through top scorer Conor Layng.
However, after weathering the early Pie onslaught, Moyross eventually found their feet and gave the home side plenty to think about.
The game was only minutes old when a clever ball by Pat Mullins over the top saw the speedy Evan Patterson race to beat Moyross keeper Mike O’Donoghue to ball and deliver into the area where Layng outjumped the defence to head in his 27th goal of the season.
At this stage you feared the worst for the Premier A side who would have fallen further behind but for a superb save by O’Donoghue to deny Eoin Hanrahan.
That save seemed to buoy the visitors who enjoyed their best spell to the break.
Twice Cian Power got in behind the Pike defence but was unable to provide the required finish and Craig Collopy Duggan also evaded the Hoops defence but was denied by a fine save from Sean Hamm in the home goal.
Pike made a couple of half-time changes including the introduction of player manger Robbie Williams which succeeded in closing the obvious gaps in the first half.
Despite regaining the upper hand Pike failed to turn their possession into goals.
They had to wait until the 80th minute to make sure of the win and it took an own goal to break through.
In attempting to clear Ger Barry’s ball across the face of goal, Dylon Bourke unfortunately fired past his own keeper.
Moyross will take heart from the performance as they chase the second promotion spot in the Premier A League.
Pike will be happy with the result but also clever enough to admit it was a lifeless performance and they will need a big improvement as we head towards some vital games in the coming weeks.

Fairview qualified for a Lawson Cup semi final tilt with either Aisling or Nenagh following a hard-earned win over Athlunkard Villa on Sunday.
Few gave Villa much hope going into the tie but Christian Kerley’s early disallowed goal put the home side on guard
Russell Quirke gave the home side a half time lead but they failed to add to their tally when chances presented themselves.
With 15 minutes remaining Villa got back on level terms. Aaron Nunan forced a fine save from Mike Costello in the home goal but Danny Taylor, following up, tucked away the rebound.
The goal gave Fairview the kick they needed and they responded well.
Jamie Enright picked the perfect time to score his first of the season to restore their lead and with time running out substitute Cian Fitzgerald put the result to rest.

Mungret Regional moved to the top of the pile in the Premier League (Lower) when they beat Kilmallock 2-0 at the county venue.
Mungret’s fourth consecutive League win came about thanks to two first half goals by Conor Myers and top scorer Pa Aherne.

Prospect Priory are another side determined to take the trophy on offer for the Premier League (Lower) and they remain three points behind leaders Mungret with a game in hand, following their win over Coonagh on Sunday.

In an evenly fought encounter Prospect struck with a last gasp winner courtesy of top scorer Tyrique Leamy to take the spoils.

Carew Park moved to within a point of leaders Charleville following a 2-0 win at Aisling on Saturday evening. Mark McGrath bagged a double for the winners.
Fairview are just a point behind following their 5-0 win at Cappamore. Ben O'Shaughnessy, Scott Kirwin, Evan Ezekannagha, Sean Byrnes and Sean O'Brien scored the goals.
Murroe put five past Hill Celtic courtesy of Dave Ryan, Jack O'Carroll, Brian Quinn, David Rainsford and Jack Barry.
In the Ger Ryan cup semi final Fairview Rgs just pipped Pike Rvs for a place in the final.
Cian Specht and Matt Te Pau scored for the winners. James Carroll replied for Pike Rvs.
In the Open Cup Caherconlish beat Shelbourne with scores from Dave Corbett (2), Gary Murphy and Dan Prendergast.
In Division 1A Knockainey won at Castle Rvs thanks to scores from Dara Cunningham and Nick Hayes,
Alan Gill netted for Shelbourne but Kilfrush prevailed with scores from Kevin Meade (2) and John Fitzgerald.
A hat trick from Paul O’Brien gave Patrickswell the points in a 3-2 win at Summerville Rvs. James Cleary and Ciaran Cable scored for Rovers.
Div 2B leaders Caherdavin were held scoreless at Parkville.
Pallasgreen had a big win at Caledonians, Vinny Ryan netted five with Corey Ryan and Brian O'Leary also among the goals.
Glenview beat Charleville thanks to scores from ara Curran, Barry Butler and Sean Keane while goals from Colin Coleman (2), Colm O'Malley, Jay Madden and Jack Noble saw Newport past Athlunkard Villa.
Div 3A Leaders Pike Rvs B returned to winning ways with a 2-1 win over Newtown Rovers. Paul Goodman and Jamie Hogan won it for Pike. Alan O’Dwyer replied for Newtown.
Ethan O'Sullivan, Conor Laffan and Gary McInerney scored for Broom in a 3-2 win over Brazuca United while goals from Paddy Bermingham and Ken O'Loughlin helped Herbertstown to a 2-0 win over Mungret Reg D.