Limerick Junior Soccer Round Up: Pike Rovers left to fly the flag in FAI Junior Cup 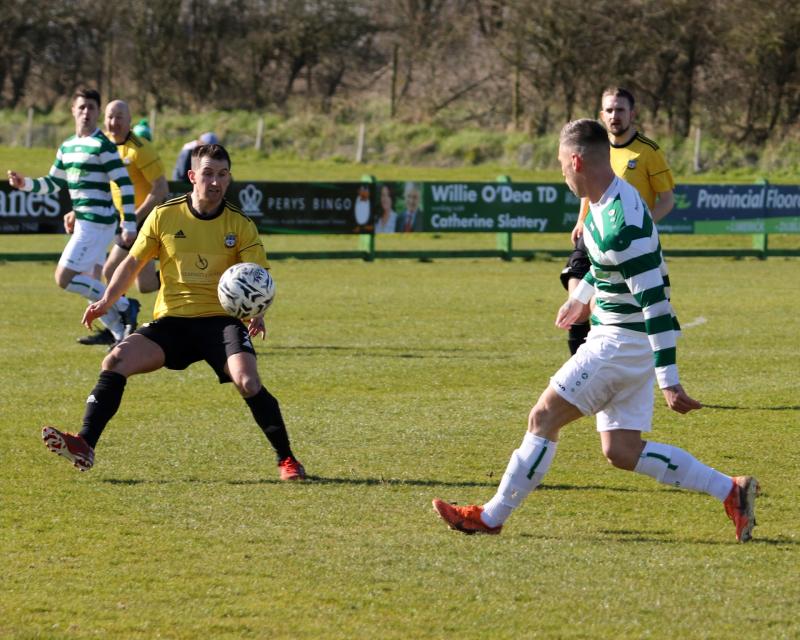 Pike Rovers will be Limerick’s last remaining hope for the FAI Junior Cup this season after they defeated Ballinasloe 2-0 at the Pike club on Sunday.
After the disappointment of being knocked out of the Munster Junior Cup last weekend, Pike Rovers manager Robbie Williams demanded a much-improved showing by his charges and he will be happy with the outcome.
The player manager opted to line out in front of the back four and his experience was telling.
The visitors were a well organised side and but for a superb Gary Neville save would have taken a lead in at the break.
After the break Pike upped the tempo and got their reward when Wayne O’Donovan’s corner kick was flicked on by Eoin Hanrahan and Aaron Murphy arrived on cue to finish to the net.
Five minutes later Pike were rocked back on their heels when the visitors were awarded a penalty but they squandered the chance firing over the top.
Pike grabbed the crucial second goal after 75 minutes when Williams played top scorer Conor Layng free and the former Ballinasloe player broke his old team mates’ hearts by rounding the keeper to fire home.

Fairview Rgs 1
Salthill Devon 1
(Salthill won 4-1 on pens aet)
Fairview Rgs’ prolonged reign as FAI Junior Cup champions came to a halt on Sunday afternoon when they crashed out of the tournament after a penalty shoot out with Salthill Devon.
The Galway side were a physically bigger side, well tutored and disciplined, restricting the home side to a handful of chances despite having the bulk of possession.
Fairview had the bulk of the possession but more often than not, their incursions ended once they hit the 18 yard line.
A scoreless second half continued much in the same vein after the restart and James Fitzgerald was unlucky with a shot from 20 yards that was drilled narrowly wide of the target.
The visitors broke the deadlock from a corner kick midway through the second half, Aaron Conway ghosting in at the back post to blast in.
To their credit Fairview did not panic and were level ten minutes later. Conor Coughlan seemed to be fouled nearly every time he gained possession and another mazy run ended the same way, this time resulting in a spot kick which was tucked away by Steven Bradley to level the tie.
Extra time failed to separate the sides and the dreaded penalty shoot out, so often a friend to the Blues, on this occasion proved their undoing, with the Galway side proving more accurate.

Regional United suffered the agony of exiting the National competition to a hotly disputed penalty kick in extra time.
It was doubly painful considering the side had fought back twice to bring the game to extra time.
Joey McDonnell was the hero for the winners scoring all three goals.
Tolka took the lead early on but Eoghan Burke scored from a free kick to square the tie.
However McDonnell netted again to keep his side ahead at the break.
Regional battled back in the second half and when Willie Griffin was fouled in the area, Kieran O’Connell converted the spot kick to send the game to extra time.
The referee awarded a hotly disputed penalty kick, seemingly ignoring the advice of his assistant and McDonnell made no mistake to clinch a 3-2 win.
Regional Utd: Peter Healy; Samuel Ogundare; David Cowpar; Andy Quaide; Graham Burke; Ross Fitzgerald; Ewan O'Brien; Kieran O'Connell; Willie Griffin; Dave Lyons; Subs: Eoghan Burke; Sid Bourke; John McDonagh

Premier League
Coonagh Utd 0
Mungret Reg 4
Mungret Reg went top of the newly former (Bottom six) of the Premier League with an impressive 4-0 win at Coonagh.
Aaron Long and Evan Barrett had Mungret two goals to the good at half time and Pa Aherne added a brace after the break to complete the tally.

Prospect Priory 0
Kilmallock 1
Kilmallock won again, beating Prospect 1-0 to put pressure on the sides above them.
Paul Doona scored the only goal of the game to seal the points.

Munster Junior Cup
Carew Park 2
Drinagh Rgs 0
Carew Park qualified for the last 16 of the Munster Junior Cup on Sunday afternoon beating Cork outfit Drinagh Rgs.
The reward for Albert Slattery’s men is a trip to another Cork side, Coachford.
Despite plying their trade in the second tier of the local leagues, Carew have a hugely talented and experienced side and will be a match for most teams they cross this season.
Pat Boyle put the Limerick side in front with a shot from inside the box on the hour mark.
With five minutes remaining Mark McGrath scored the crucial second goal when he out muscled his marker to slot under the keeper and secure the win.
Carew Park: Evan Moloney, David Power, Evan Lynch, Gary Griffin, Francis Kett, James Slattery, Pat Boyle, Gavin Hehir, Mark McGrath, Jamie O'Sullivan, Danny McCarthy, Subs; Brian Collopy, Dean McNamara, Adam Dore, John Boyle, Jonathan Grant, Luke Fitzgerald, AJ McCormack

Lawson Cup
Aisling Annacotty 1
Ballynanty Rvs 0
Rumours of Aisling Annacotty’s demise were well and truly quashed on Sunday morning when John Lysaght’s men turned in a battling performance to defeat Ballynanty Rvs in the Lawson Cup at Annacotty.
Drawing Ballynanty Rvs, (who hold the record for Lawson Cup wins), at any time is a daunting task in this competition but coming on the back of a heavy Tuohy Cup defeat at the hands of the Northsiders made it more so.
You feared for the home side early on as Balla took the upper hand but Aisling stuck to their task and played their way back into the tie.
Ballynanty Rvs were unable to turn their possession into goal chances and Aisling goalkeeper Brian O’Connor was well protected by his defence.
Scoreless at the break, Aisling slowly began to find their feet, buoyed by midfield pair Tony Whitehead and Shane Tracey.
The deadlock was broken with a piece of real quality. After fine work by Richkov Boevi, Aisling won a throw on the left. Tracey’s quick thinking picked out Blake Curran who lopped the ball back over the head of his marker before hitting a volley over Stephen McNamara from 30 yards for a worthy winner.
The home side needed a fine save from O’Connor to secure the win after Conor Ellis broke free late on. A visit to Nenagh is next for Aisling with the winners earning a place in the last four.
Moyross advanced with a 5-1 win over Summerville Rvs. Cian Power, Keith Colbert, James Cleary, Dylan Bourke and Stephen O Connor scored the winning goals. James Cleary replied for Rovers. Shelbourne with scores Jack O'Donovan, Josh Leung and Jack Ryan saw off Lisnagry A on a 3-1 scoreline.